A HAIRDRESSER has shocked people after revealing he’s been using Gorilla Glue in clients’ hair – for years.

The superglue hit the headlines recently after a woman revealed she used Gorilla Glue instead of hairspray – leaving her hair stuck in the same style for a month. 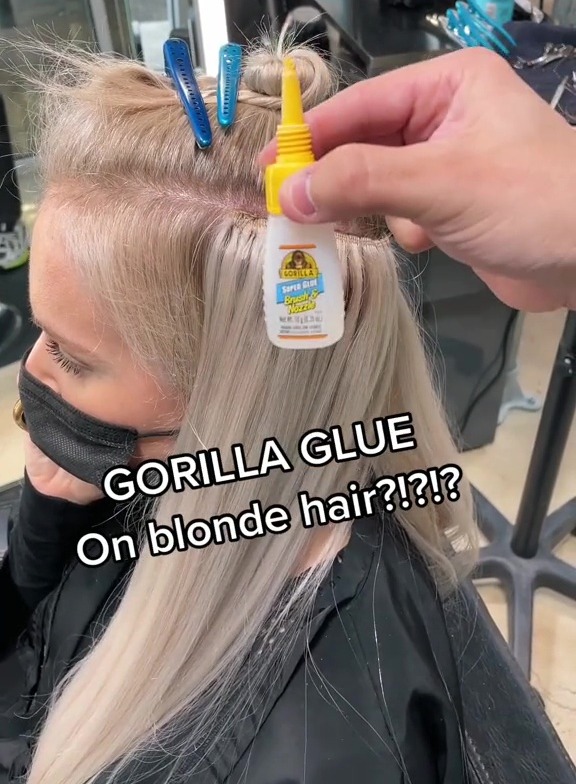 Tessica Brown ended up having to go to the hospital, and was forced to chop off her ponytail and undergo surgery to remove the glue from her scalp.

But salon owner Eric Vaughn shared a clip on TikTok, revealing he uses the industrial strength glue to secure extensions.

He shared a video showing himself attaching a blonde sew-in hairpiece to someone’s hair, and as he finishes the job, he reaches for the Gorilla Glue.

The salon owner said: “So I’ve been using Gorilla Glue in people’s hair for years but this is the only way you should ever use it. 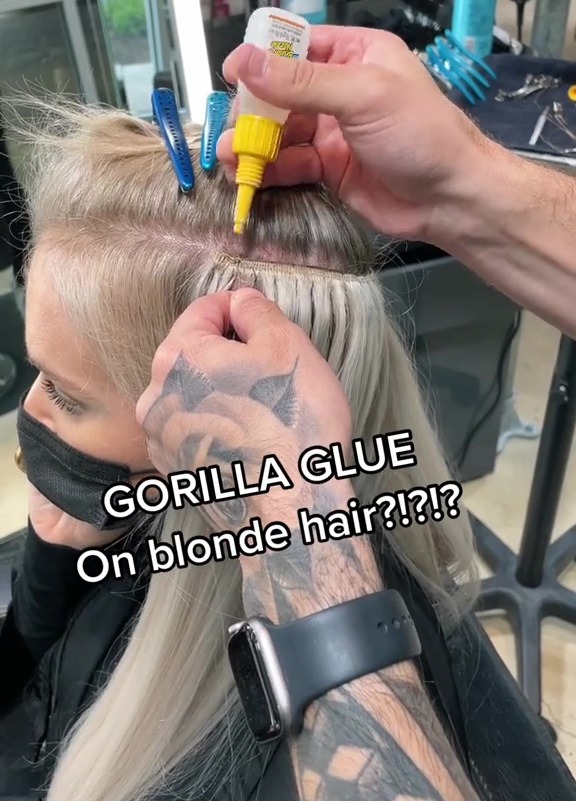 “So at the end of a sew in I’ll take my threads and knot them together, take a tiny little dot of Gorilla Glue, blow dry, and cut that. And that knot is going nowhere.”

After giving it a blast with the hairdryer, it’s safe to say the hairpiece isn’t coming out any time soon.

But Eric stresses: “Don’t put this on your actual hair.” 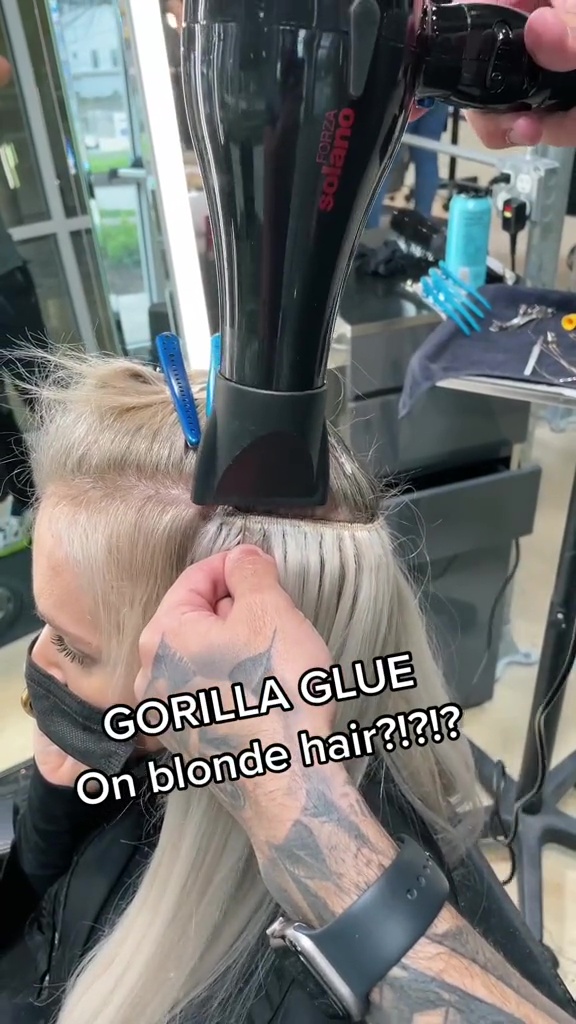 Despite saying he uses it on the thread, and not the client’s hair or scalp, people are horrified over the industrial strength glue used to hold the extension in place.

Following Tessica’s ordeal with the glue, the company put out a statement confirming their products should not be used on hair.

They issued a comment on Twitter, saying: “…This product is not indicated for use in or on hair as it is considered permanent.

People were horrified by Eric’s unusual method of securing extensions, with one person writing on social media “I'm sorry no Gorilla Glue should be around my hair or head."

Another wrote: “Omg I use this for household stuff definitely not hair."

A third thought: “I say no more Gorilla Glue in the hair period." 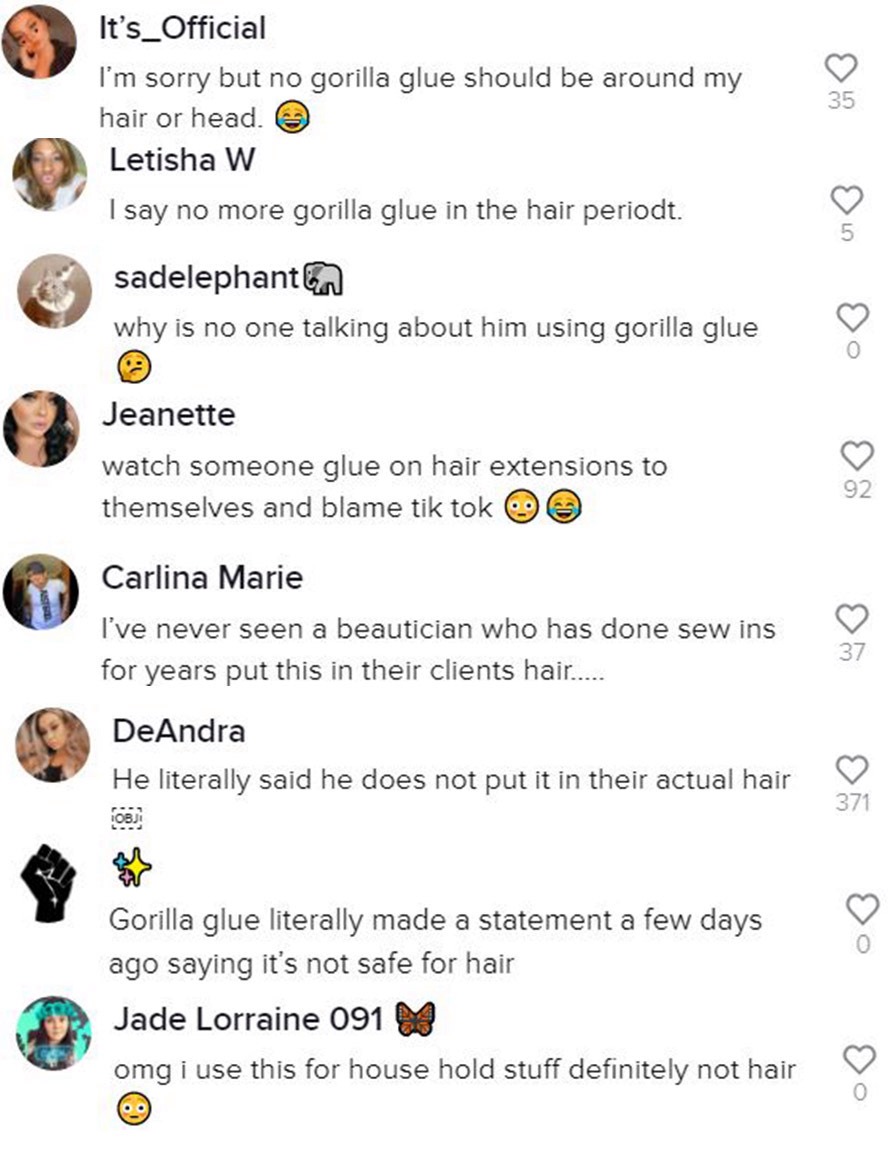 This person said: “Watch someone glue on hair extensions to themselves and blame TikTok."

While someone else added: “Gorilla Glue literally made a statement a few days ago saying it's not safe for hair."

Although somebody else pointed out: “He literally said he does not put it in their actual hair."

Meanwhile here's everything you need to know about removing gorilla glue.

This woman had to go to hospital after using Gorilla Glue as setting spray leaving her hair stuck in one style for a MONTH.

TikToker Tessica Brown who put Gorilla Glue in hair later had her ponytail CUT OFF and claims her ‘scalp still burns’.