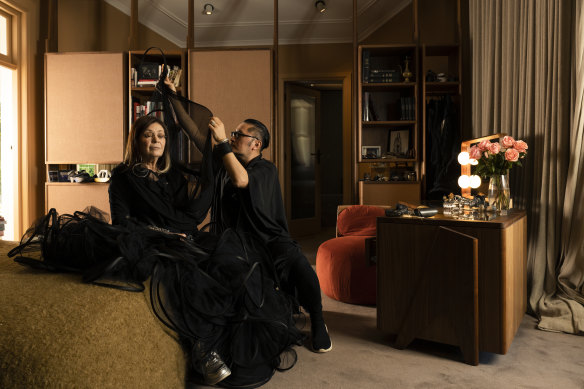 Dr Gene Sherman with fashion designer Alistair Trung in her bedroom at her home in Centennial Park.Credit:Louise Kennerley

Perched on her bed in a sprawling mansion, a black veil draped over her, Gene Sherman fleetingly resembles Miss Havisham from Charles Dickens’ Great Expectations. The comparison can’t be stretched much further: Sherman’s mansion opposite Sydney’s Centennial Park is a pristine hive of activity; her PhD was in French Literature rather than English; and Miss Havisham wished that she had owned such a striking pair of silver sneakers.

“I’m just holding myself together,” Sherman, 75, says. Her usually galloping voice, filtered through a distinctly South African accent, has lost some momentum. “He only died four and a half weeks ago. He died at home, in the room across the corridor. I promised him he would die at home.”

The 1918 home Braelin, designed by architect Donald Esplin for lord mayor of Sydney, Sir Allen Taylor, was purchased from Atlassian co-founder and tech-billionaire Mike Cannon-Brookes and his wife Annie four years ago.

Despite the obvious appeal of the historic single-floor grand home, the move from the Shermans’ beloved Victorian manor in Woollahra was prompted by practicality, with Parkinson’s making its presence more deeply felt in their lives. 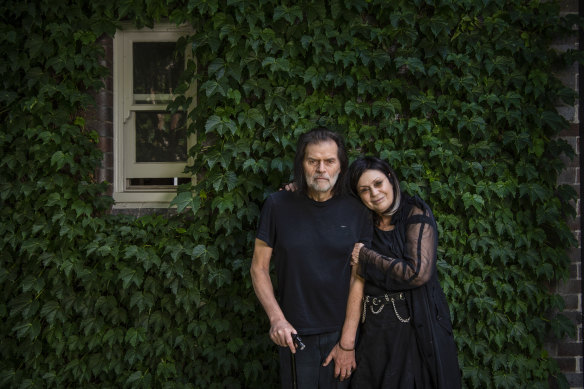 “We were in a perfectly lovely house, but it had stairs. I could envisage a time when he was not going to manage. We were lucky to find this property. How many houses do you find with stables? And we could afford it.”

Having operated the Sherman Gallery in Glebe then Paddington from 1986 to 2007, representing Shaun Gladwell, Guan Wei, Janet Laurence, Akio Makigawa, Mike Parr, Imants Tillers, and Hossein Valamanesh among others, the art collection set against the restored panelling is impressive but not unexpected. 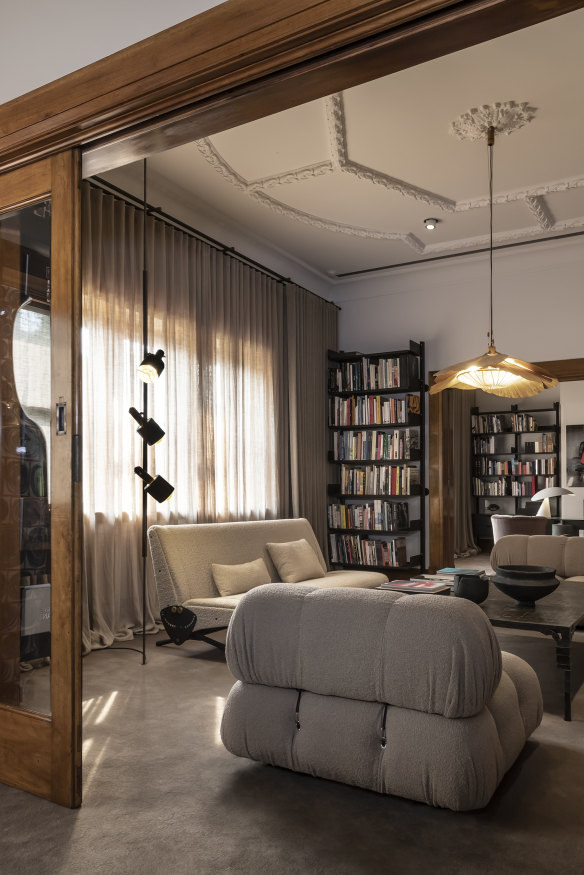 “The furniture is new as a collection,” Sherman says. “Brian was already too ill to participate in this house. In previous houses he did. He had a good eye, not a good ear. I really went on a learning journey.”

The tools for that journey can be seen in the office adjoining the living room, with countless books crowding shelves. There are biographies of artists, architects, composers, non-fiction and fiction in French and English.

“But not politics, I’m not interested in politics,” Sherman says. “This is only part of my library. I’ve got a library in Tel Aviv, in the office and in the pavilion, and I’ve also given away numerous books.”

“When I’m reading I go into another world. I’ve been reading since I was six years old. While Brian was lying in the coma, I couldn’t read. That told me how empty I was. I couldn’t nourish myself.”

“I’ve started reading again and that tells me I’m healing a little.”

There’s also been some healing from the new book in Sherman’s bejewelled hands, The Spoken Object: A Collector’s Journey in Fashion, Jewellery, Design and Architecture, which she will launch in November. Through photography and essays by academics Alison Kubler, former Powerhouse Museum director Dolla Merrillees and interiors expert David Clark, Sherman’s most personal passions are presented.

Fittingly the cover, designed by Daniel New, is black and silver, perfectly coordinating with the steady palette of Sherman’s changing uniform. 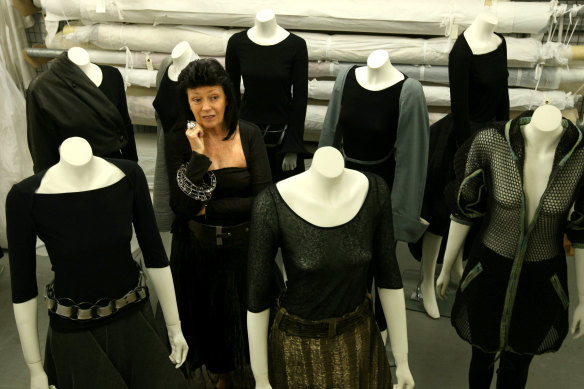 Gene Sherman modelling Japanese clothing with other pieces donated to the Powerhouse Museum in 2009.Credit:Steven Siewert

“Collecting Japanese fashion and contemporary jewellery since 1985, initiating and producing architectural projects since 2008 and co-curating a mid-century furniture and object collection more recently, I felt the need, within the framework of my longstanding scholarly interests to document and draw together significant elements of my applied arts journey.”

The jewellery was photographed in Sherman’s home, while the Powerhouse Museum supplied imagery of some fashion from Commes des Garçons, Yohji Yamamoto and other Japanese designers that had been donated to their collection. Folds of charcoal wool, quilted black coats and asymmetrical black skirts are punctuated by bursts of gold, emerald and navy pleating from Issey Miyake.

“While Gene was drawn to the aesthetic and sculptural quality of the clothes and selected pieces with which she had an immediate connection, it would be wrong to say that she doesn’t have a process or a set of criteria that govern her acquisitions,” Merrillees writes in The Spoken Object.

“Her clear interest in the relationship between art and fashion, the distinct appeal of the philosophy of wabi-sabi , mindfulness and a desire to support sustainable fashion reflective of her taste judgements and interests.”

The book is dedicated to, “the designers and for Brian.” 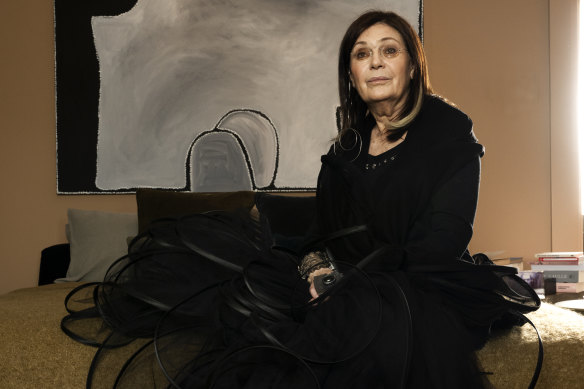 Dr Gene Sherman in her bedroom at her home in Centennial Park.Credit:Louise Kennerley

“I’m such a perfectionist,” she says. “I’m not always pleased with my efforts. I think that I always could have done better. With this book, I really do feel very pleased.”

Having reached some closure with the engaging catalogue of some of her achievements, Sherman could be taking comfort in the company of her son, Oscar-winning producer Emile and daughter, author and animal rights campaigner Ondine, grandchildren and 80 family members in Sydney. Instead, she is packing her bags, veil and all, to travel to London.

From October 28 to November 6, The Sherman Centre for Culture and Ideas, formed following the closure of the gallery, will present a series of talks from emerging Australian figures in fashion, architecture and the applied arts in the British capital. Sherman says it will be her final public commission in a career spanning more than three decades.

“I definitely give of myself,” Sherman says, having devised an extensive program of Australian design talent that includes Romance Was Born, First Nations designer Grace Lillian Lee, self-portraitist Atong Atem and architect Ninotschka Titchkosky among 45 speakers.

The focus is on emerging talent, but unlike many people who skirt the hemlines of the fashion world, Sherman is just as happy looking back as thinking ahead.

“To me you can’t look forward unless you can look back,” she says. “The threads of the past are woven into the present and project into the future.”

“The Jewish community has a 5000-year history. I’m very aware of that. The people who are anti-Israel have no idea. They don’t know what happened before yesterday.” 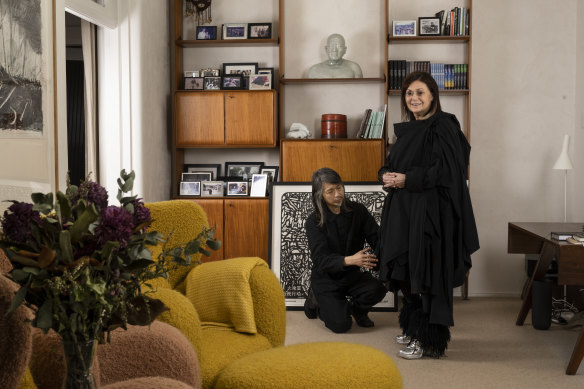 “Even some young black people in South Africa have forgotten about the Apartheid period,” she says, referring to the country she finally left in 1976.

“If as human beings we learnt from history, the world wouldn’t be in the state it’s in.”

Looking ahead, the wardrobe Sherman has commissioned from Australian designers Akira Isogawa and Alistair Trung for her journey, sparks some enthusiasm about leaving her home and recent memories.

“I’ve gone to Japan 58 times for work, and I’ve always set aside a couple of hours to go to the three designers whose work I’ve collected, but that stopped,” she says. “I had this idea of commissioning five pieces from my two favourite Australian designers, both who have Asian origins.”

“Alistair had to close his store because of COVID, and he has had a burst of creativity. If this has given him a whole new creative journey, that has already fulfilled one of my goals.”

As for any other goals?

“I’m feeling fragile,” she says, before her voice returns to it’s former full stride. “I’m also feeling very determined to make this initiative to work as best as it possibly can.”

The Spoken Object: a Collector’s Journey in Fashion, Jewellery, Design and Architecture (Images Publishing Group) is out now.

Most Viewed in Lifestyle