Queen Letizia, the Spanish royal, who is known for being impeccably dressed at all times, attended the Princess of Girona Foundation award ceremony on Friday 27 February and was pictured wearing a sharp emerald suit, clearly taking a seasonal colour pallet inspiration from British leading royal lady, Kate Middleton – who was pictured earlier this week in her very own emerald-coloured ensemble.

Whereas Kate opted for a more casual look, the Spanish Queen looked the epitome of sophistication in her colour coordinated ensemble when she arrived at the event.

Letizia, who has two children – Leonor, Princess of Asturias, 14, and Infanta Sofía of Spain, 12 – with husband King Felipe VI of Spain, 51, chose to wear a mint sea-green silk blouse beneath the emerald suit.

The tailored garment had a marble-style button on the front and three buttons running up the sleeves. 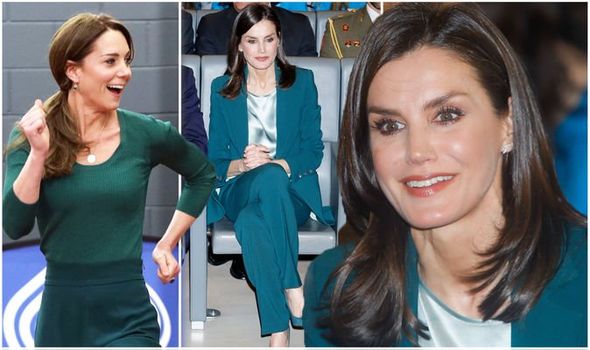 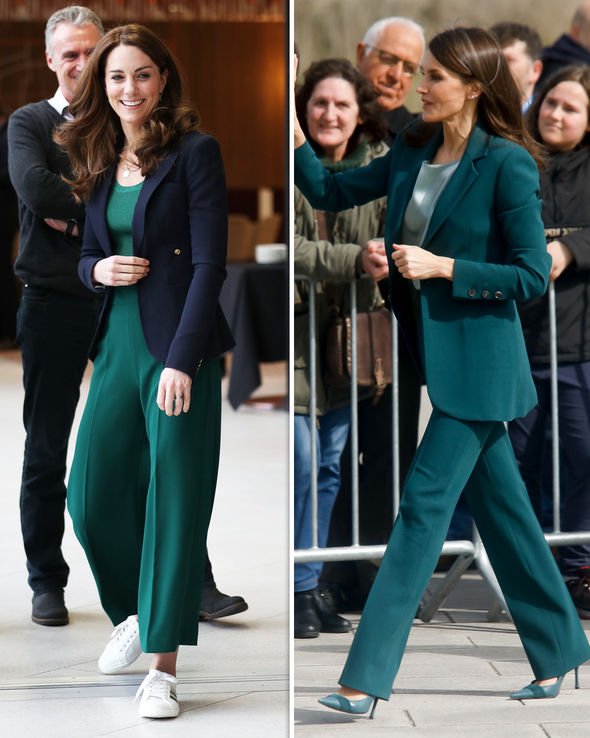 However, following Kate’s lead the Queen of Spain added a casual edge to her look by rolling up the sleeves of her blazer to her elbows.

With the suit, she wore perfectly co-ordinated emerald stilettos with a point at the toe, which added a few extra inches to her 5-foot 7-inch frame.

Wearing her sleek and shiny brunette tresses loose to her shoulders, the mum-of-two enhanced her natural beauty with her classic make-up look.

She opted for a brush of bronzer across her cheeks, brown smokey eye-shadow across her eyelids and a sweep of a warm nude lipgloss across her lips.

Queen Letizia kept her jewellery to a minimum, only opting for a simple pair of stud earrings and a gold circular ring on one hand.

She was photographed warmly greeting fellow guests and shaking their hands before she made her way into the venue.

But this isn’t the only time that the Queen of Spain has favoured suits.

Previously, Letizia stepped out in an equally stunning scarlet suit on a number of occasions.

In her most recent appearance wearing the suit, the former journalist opted to coordinate her shoes, blouse and accessories to match the scarlet suit. 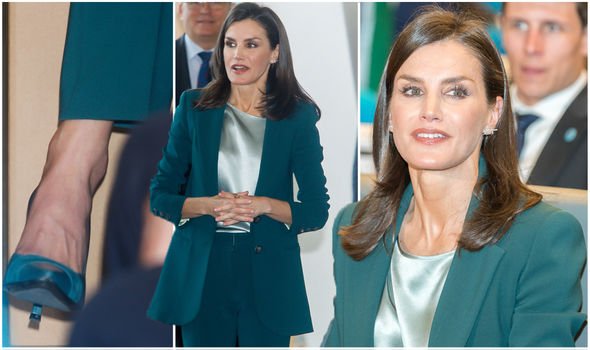 On another occasion, the former journalist was pictured wearing a chic grey chequered suit to an event in Spain.

The wife of King Felipe VI of Spain, 51, chose to wear a smart checkered trouser suit with a crisp white shirt underneath and left the top button undone.

She teamed her outfit with a pair of pointy black pumps and a matching leather bag.

Earlier this week, Kate Middleton, 38, stepped out in a dressed down head-to-toe emerald outfit as she attended a SportsAidEvent at the London Stadium.

The royal wore a pair of loose dark green culottes, and she tucked a thin green jumper into the waistband. 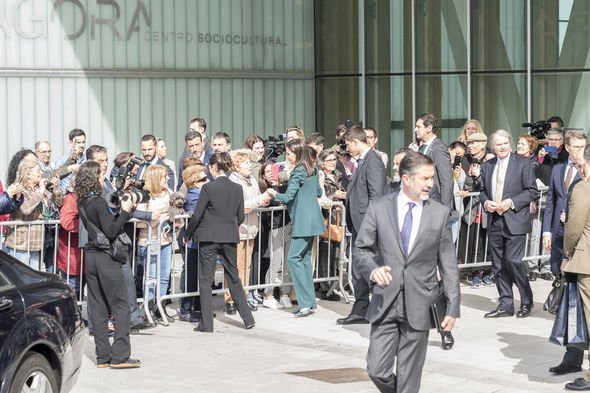 The high-waisted trousers were fitted at the waist and continued into a loose style.

The piece They cut off at her ankle and Kate paired the look with a thin ribbed jumper.

Her green top had a low round neckline and three-quarter length sleeves.

The Duchess of Cambridge completed the casual look with a pair of white Marks and Spencer trainers, £29.50.

After showing off her sporting moves, the royal posed with young athletes and staff.

When doing this, she covered up in a navy blazer from Canadian label Smythe.

The recycled blazer has been worn by the Duchess many times as far back as 2011.