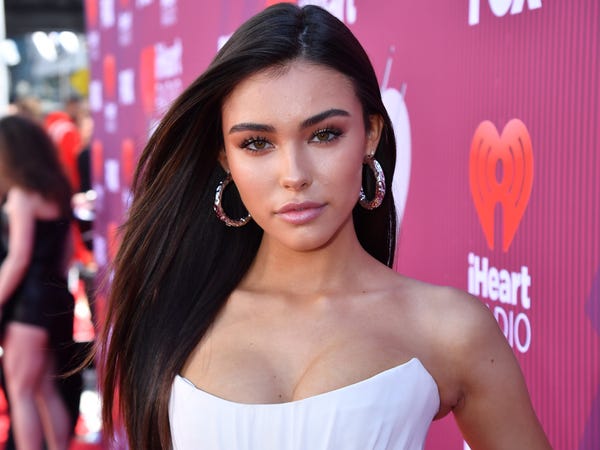 Madison Beer rose to fame in 2012 after Justin Bieber tweeted a video of the then-13-year-old singer covering Etta James' song "At Last."

Now 21 years old, Beer is set to release her debut studio album in 2020 with Epic Records.

And though she has more than 20 million Instagram followers watching her every move, there's plenty that people probably don't know about the New York native.

From her favorite book to her childhood nickname, here are 20 facts that you probably didn't know about Beer.

She was discovered by Justin Bieber when she was 13. 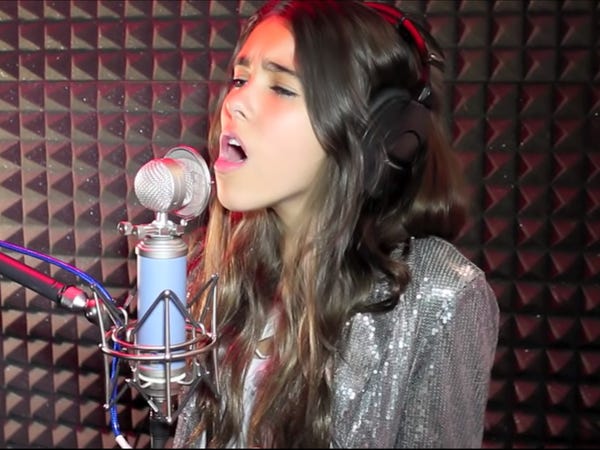 The "Holy" singer tweeted a video of Beer, then 13, singing a cover of Etta James' song "At Last."

After the pop star drew attention to Beer, her name began trending on Twitter. She signed with Island Def Jam Records and was managed by Scooter Braun.

During a 2017 interview with Billboard, she revealed that there was actually more to the story than Bieber stumbling upon her YouTube video.

Beer's mom Tracie posted the cover on her Facebook page. One of her Facebook friends watched the video and sent it to Braun, Bieber's manager. Braun then showed the video to the "Sorry" singer, who tweeted it out to his 25 million followers.

"It was like a train of people seeing it and then it making its way to him," she said.

Bieber made a cameo in Beer's first music video for her song "Melodies."

Her label dropped her when she was 16. 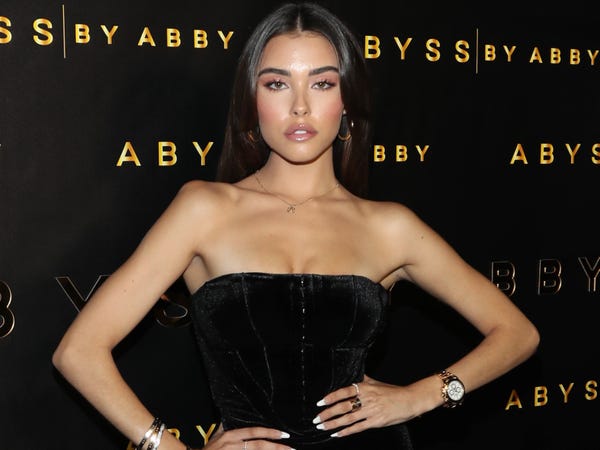 After signing with Island Records, Beer was encouraged to stick to the pop genre, she told Rolling Stone. When she pushed back against their vision, the label dropped her before she released her first full album.

"I was always told, 'Well, one day when you're older, you'll be able to make that stuff,' " she told the magazine. "But then I realized that I don't need to be older to do it."

The TV shows, movies, and projects laid out for Beer were scrapped, she explained during a 2019 interview with BUILD.

"It took me getting my dreams and then having them, honestly, all ripped away from me to put me where I am now. I don't think I would be as artistic. I literally had everything taken away from me," she said.

Beer explained that "everyone left" and "gave up" on her after the label dropped her except for her mom, who managed the singer on her own for two years. 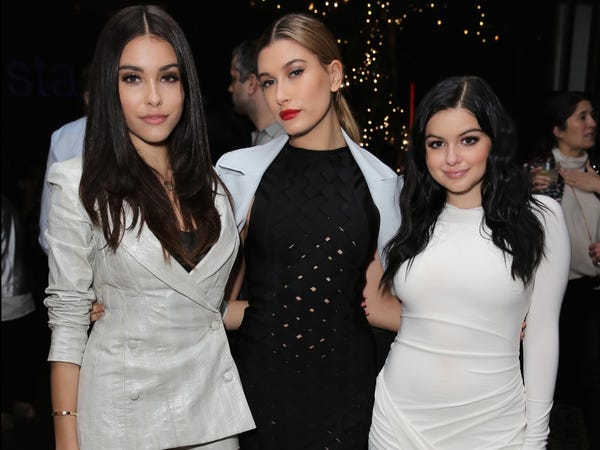 Since breaking into the entertainment industry, Beer has formed friendships with various Hollywood celebrities

She celebrated her 19th birthday with friends like Presley Gerber and Hailey Bieber (née Baldwin), who is now married to Justin Bieber.

"I've known Hailey since I was 11-years-old living in New York. I don't know, I just look at them as normal people," she told The Sun.

Beer is also friends with Selena Gomez, who used to date the "Yummy" singer. Gomez defended Beer after fans insulted the "Selfish" singer for being friends with both Hailey and Gomez.

"I have known Madison since she was a baby and watched her continue to become the woman she is. There is no issue," Gomez reportedly wrote to fans.

Beer has also been spotted spending time with Drake and attended his New Year's Eve party in 2019.

Beer grew up in Long Island but moved to Los Angeles for her career. 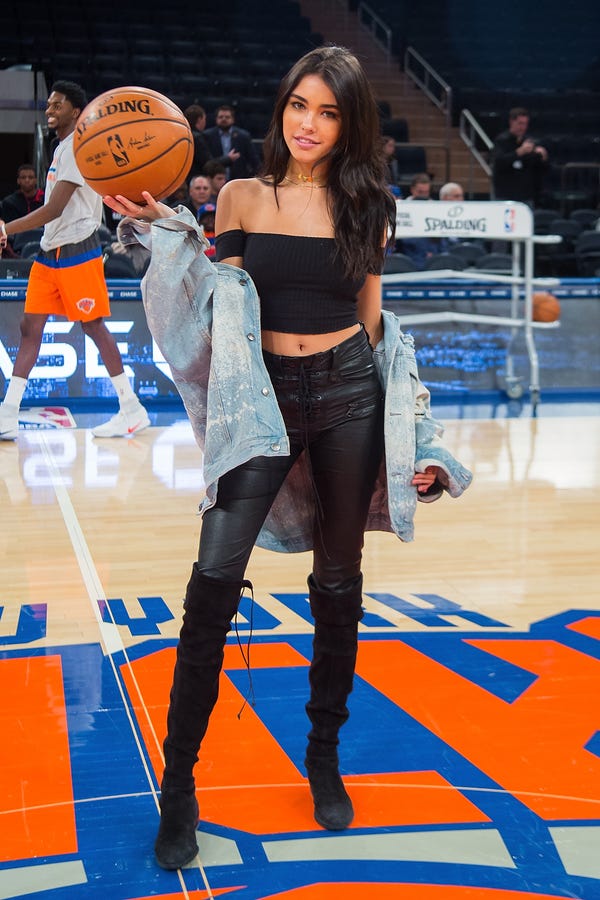 Beer, along with her mom and younger brother, moved from Long Island to Los Angeles to pursue her music career when she was 13.

She was homeschooled from seventh to 12th grade.

Though she's lived in California since, the musician said she's not "the biggest fan" of Los Angeles.

"I'm very open and honest and I speak my mind a lot. I'm such an accurate representation of New York, but in LA a lot of the times I get misconstrued and people think I'm obnoxious or annoying but they really just don't understand I'm genuinely just a loud-mouth New Yorker," she told Paper.

She continued: "So I feel like that's why a lot of people don't really understand me and that could be why I have issues in LA."

Her dream role would be a murderer in a horror film. 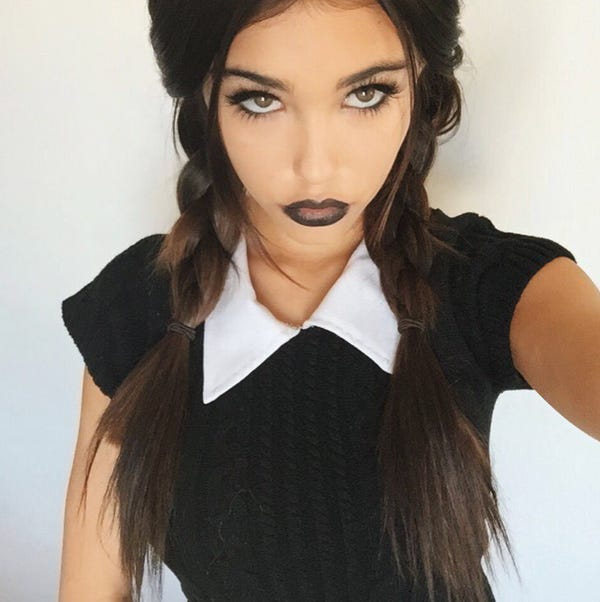 "My dream role would be to play a murderer in a horror movie. 'The Orphan' is one of my favorite movies I just love horror moves," she told The Sun in 2018.

Beer added, "But I don't want to be getting killed. I want to be like the psycho." 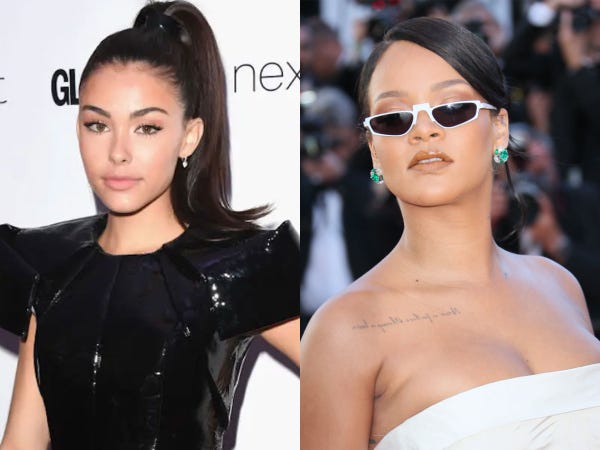 Beer revealed that she anonymously manages a popular Rihanna fan account on Twitter during a 2015 interview with Hollywire.

"I'm not going to tell you what it is because it has a lot of followers, and nobody can know that it's me. People would be like, 'Wait, what?'" she said.

The singer added that she's "literally in love" with the Barbadian star, adding that she hopes to one day work with her.

"Rihanna, I would make out with you and then do a collab with you," she said.

Beer said she's been in love with a girl before but prefers not to label her sexuality. 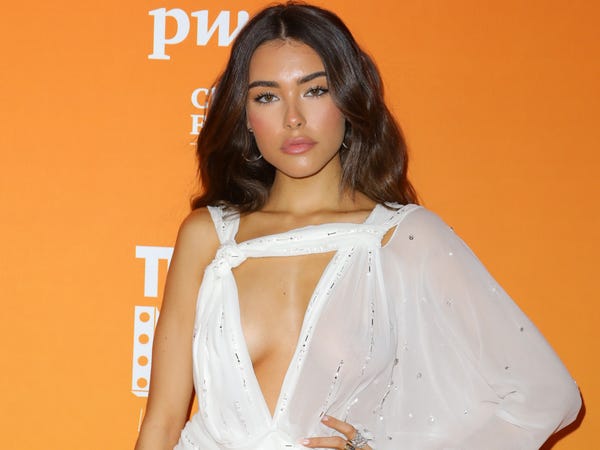 The singer, who's previously dated Jack Gilinsky and Zack Bia, opened up about her sexuality in a YouNow chat with fans in 2016.

"I'm not a lesbian, but I definitely love girls," Beer said.

Beer then continued to explain that she's had romantic feelings for a woman before.

Beer was raised as a Jew and had a Bat Mitzvah. 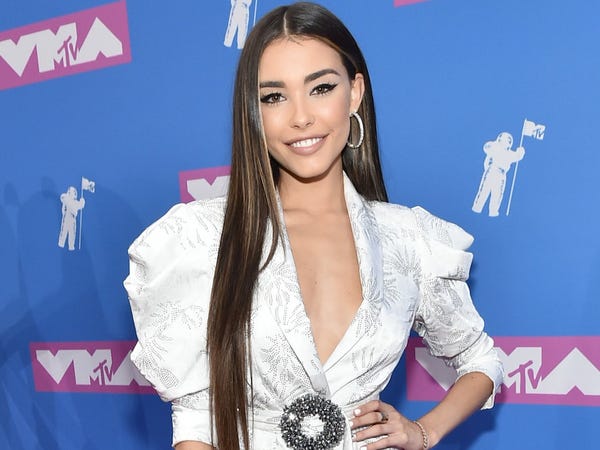 A fan noticed that Beer had posted several photos from her Bat Mitzvah and asked if she was Jewish.

Her favorite book is "Lolita" by Vladimir Nabokov, and she faced backlash for admitting that she "romanticized" the book. 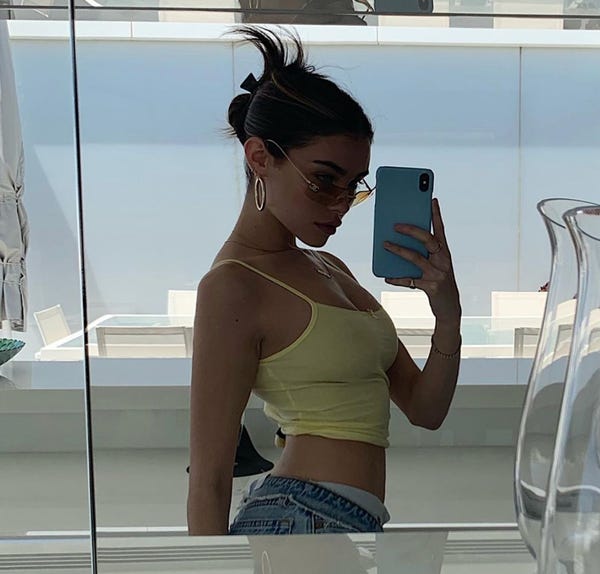 Beer was criticized for saying she was "romanticizing" her favorite book, "Lolita"  by Vladimir Nabokov, during an Instagram Live with fans.

The 1955 novel is about a middle-aged professor that becomes obsessed with a 12-year-old girl and marries her mother to stay close to her. "Lolita" is considered a classic yet controversial story, with many readers finding it disturbing and uncomfortable.

After the singer's statement about the book, the hashtag "#MadisonBeerIsOverParty" began trending on Twitter, as many individuals took issue with Beer's handling of the subject matter.

The musician addressed her comment in a series of since-deleted tweets.

"People have their own interpretations. i didn't write it. i just like it and don't see it in the way others might," she wrote, adding, "I've always known it's a controversial book… but i've always said it's my favorite. because i just like the story.. i like dark stories… always have."

Beer said that she would "never condone inappropriate relationships of any kind" and then issued a longer statement apologizing to her fans.

"Fight Club" is her favorite movie of all time. 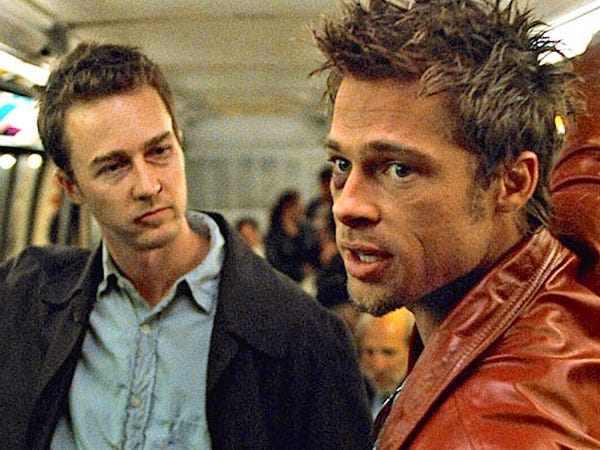 The singer listed "Fight Club" as her all-time favorite film during an interview with iHeartRadio, adding that she has Marla Singer's phone number tattooed on her foot.

She said that Christopher Nolan's film "The Prestige" (2006) was a close second.

She has numerous hidden tattoos on her feet. 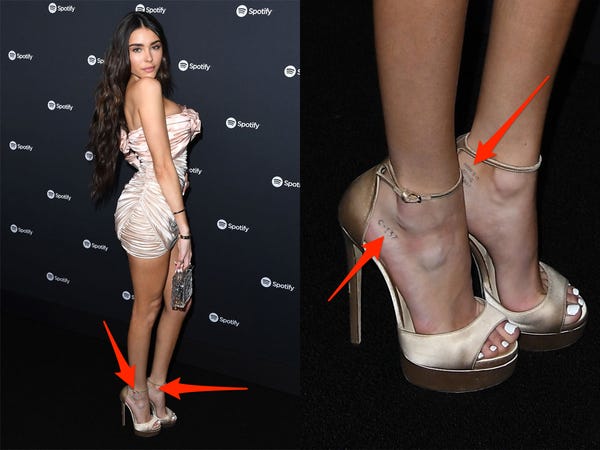 Beer said she has at least six hidden tattoos on her feet during a game of "Truth or Dare" with iHeartRadio.

One of her foot tattoos says "nightosphere," which is a dimension in"Adventure Time." Others are references to "Rick and Morty," "The Truman Show," and "Fight Club."

The singer also has the bottom of her feet tattooed along with the word "honey" on the inside of her lip.

She cut her own bangs to look like Hannah Montana when she was 9. 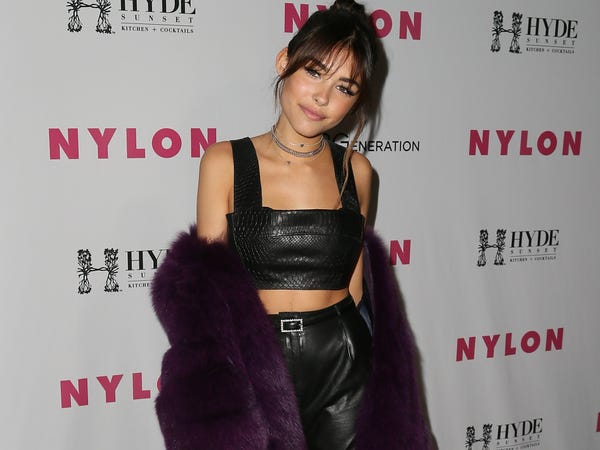 Beer explained that "Hannah Montana" was her favorite show when she was about 9 years old.

"Miley had bangs that were so cute," she recalled during an interview with AwesomenessTV.

The singer's mom told Beer that she wasn't allowed to get bangs, so she went to the bathroom and cut them herself.

"They were the craziest, worst bangs on the face of the earth," she recalled. "Don't cut your own bangs." 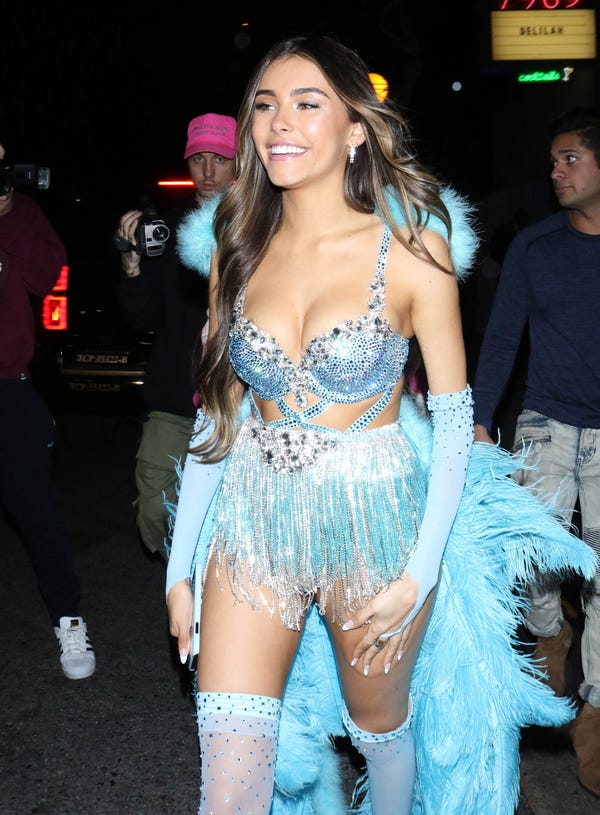 On her way into her birthday party at Delilah in Los Angeles, in March 2020, a photographer asked the singer how it felt to turn 21 years old.

She won a modeling contest when she was 4. 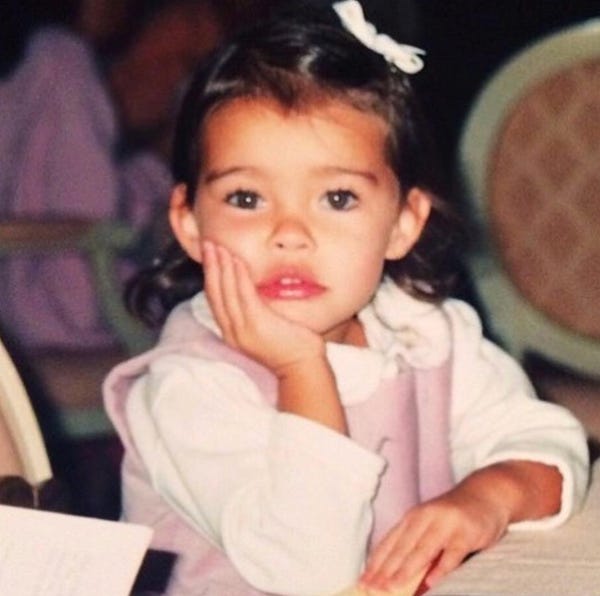 Beer said she appeared on the cover of Child magazine after winning a modeling competition at 4 years old during an interview with AwesomenessTV.

She's spoken up about having nude photos of herself leaked when she was 14. 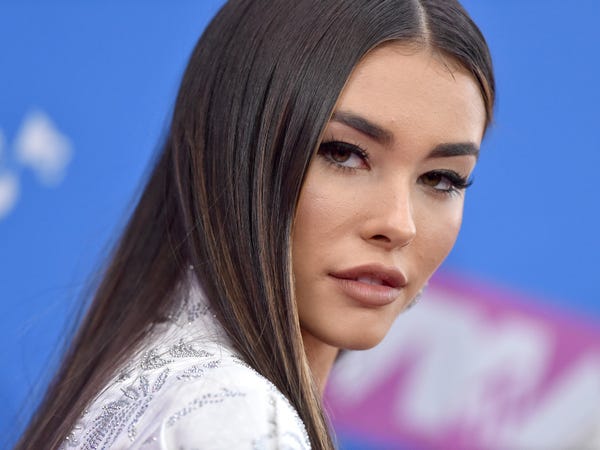 In a message she shared on International Women's Day in March 2020, Beer opened up about being 14 years old when a boy posted her "very private Snapchats" online for family, friends, and music executives to see.

She continued to explain that the same individual reshared an explicit video of her on the singer's 21st birthday.

Though she admitted that both experiences have led her to have "perpetual anxiety," Beer said she's decided to learn from them and move forward.

"On IWD I am going to free myself of this weight I carry. I am going to tell my 14-year-old self the following which I hope may help some of you to be kinder to yourselves as young women," she tweeted.

Beer continued to offer the following advice: "You should not feel shame. You were exploring your sexuality, you were learning. You should not feel like you did something wrong. Shame on those who betrayed your trust & SHAME ON THOSE WHO SHAMED YOU."

Beer believes in aliens and is fascinated by space. 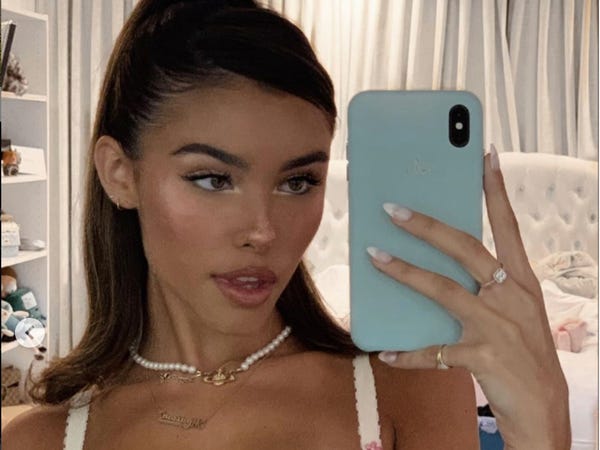 The musician spoke about space and aliens during her 2019 interview on the "Zach Sang Show."

"I think aliens are probably on a whole other dimensional journey," she said.

She explained that she believes the aliens are like the highway and doesn't think they would acknowledge something "as low-functioning" as earth.

"We are so much bigger of a picture than tiny little ant hill earth," she said.

Beer added that she's always had a connection to space and interest in other galaxies.

The singer loves to sketch drawings of women. 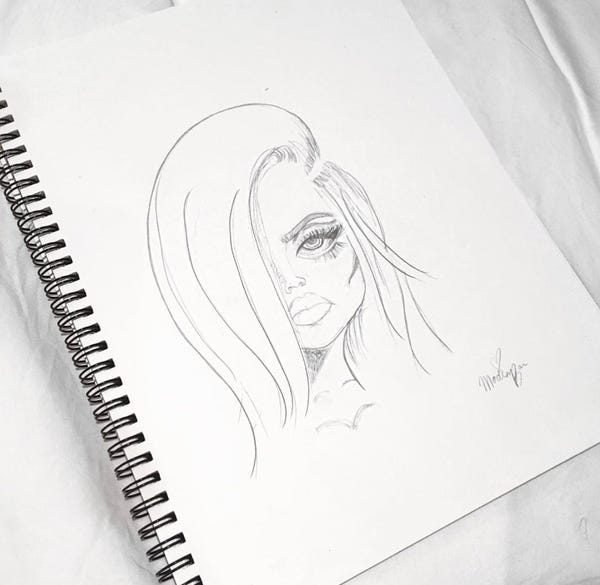 "I've been drawing my whole life, like doodling, but last year I kind of got really into it. I draw girls as like my thing I draw," she said on the "Zach Sang Show" in 2016, adding, "I draw sexy girls. I like to draw girls."

Beer explained that she's tried to draw men in the past but they end up looking like "mutant boys."

She said that her nickname is "Monkey." 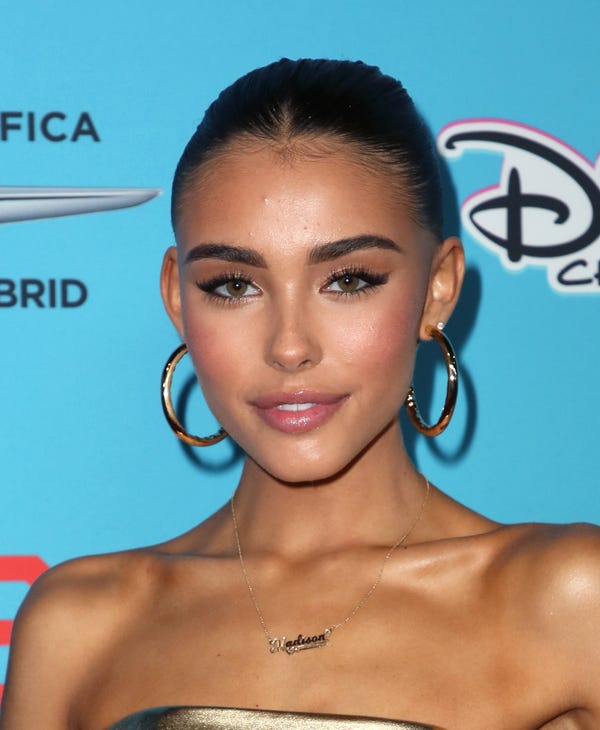 Beer replied, "Monkeys are my favorite animal.. My nickname is monkey cuz i look like one. #monkeyswag."

Beer was a competitive gymnast when she was a child. 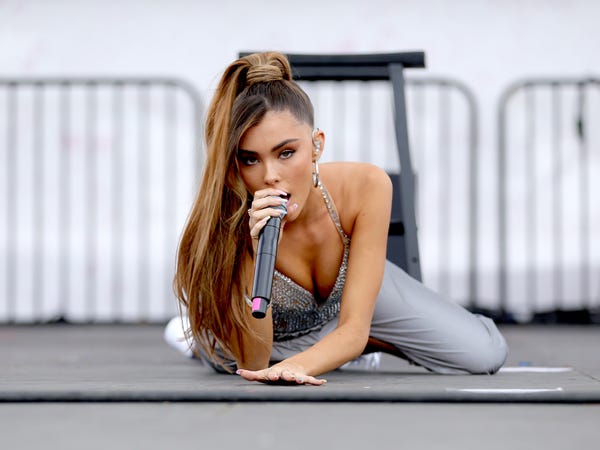 During an interview with AwesomenessTV, Beer revealed that she was a member of a competitive gymnastics team for about six years.

"I was a really competitive gymnast. I loved it so much," she said, explaining that she quit after suffering a bad neck injury.

Beer's voice was used as part of the fictional K-pop group K/DA in "League of Legends." 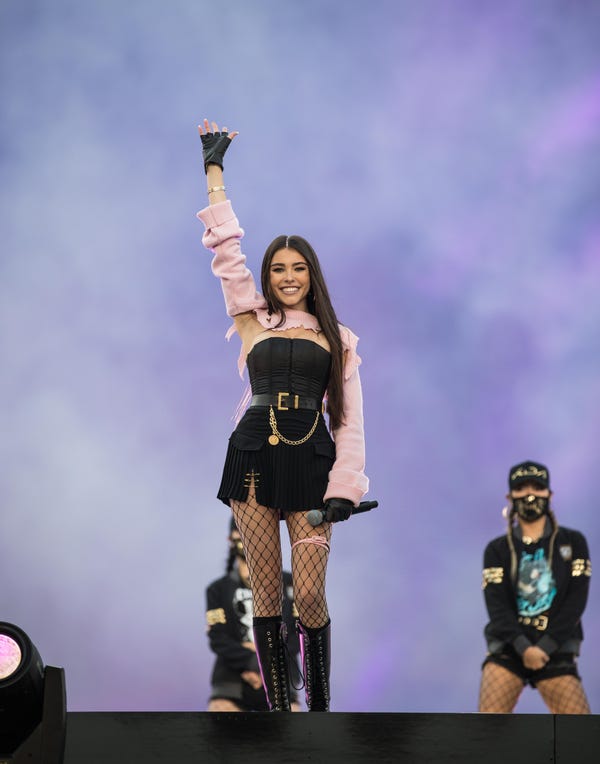 "I was very aware of 'League of Legends' because my brother plays it a lot, but I hadn't gotten the chance to play it before," she told Forbes.