Keanu Reeves, the internet's favorite boyfriend, is also a versatile actor who's appeared in countless films, some of which are available to stream right now.

Fans with access to streaming sites like Netflix, HBO Go, and Amazon Prime Video can choose from Keanu staples like "Bram Stoker's Dracula" and "The Watcher," as well as light-hearted rom-coms like "Always Be My Maybe."

Action junkies can watch "John Wick Chapter 3" and "The Man of Tai Chi," and more recent Reeves movies like "The Bad Batch" and "To the Bone" are also available to stream, too.

Whether you've ran out of self-isolation movies to watch, or just want to appreciate Reeves in all his glory, here are nine Keanu Reeves movies you can stream right now.

Note: Numerous Netflix titles drop off the service monthly, so the availability of titles below may change.

Insider has many movie and TV show lists to keep you occupied. You can read them all here.

"The Bad Batch" is a dystopian thriller that also stars Jason Momoa and Suki Waterhouse. 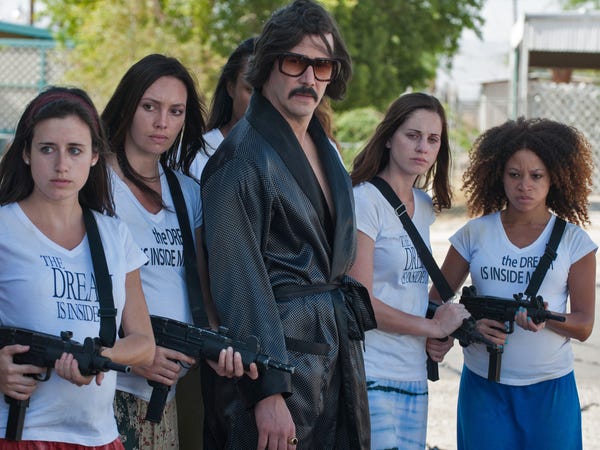 What it's about: "Banished to a wasteland of rebels, a young woman struggles to find her feet among a drug-soaked desert society and an enclave of cannibals."

Why you should watch: The movie itself leaves a lot to be desired, meaning that Reeves is definitely the highlight.

Clad exclusively in luxe bathrobes and big sunglasses, and sporting an impressively '70s mustache, Reeves gives "The Bad Batch" the ethereal yet charismatic villain it so desperately needs.

"To the Bone" focuses on a young woman with an eating disorder. 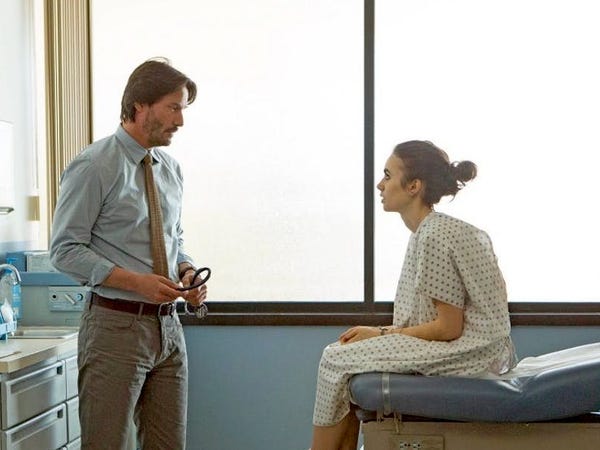 What it's about: "Ellen, a 20-year-old with anorexia nervosa, goes on a harrowing, sometimes funny journey of self-discovery at a group home run by an unusual doctor."

Why you should watch: "To the Bone" does its best to handle its subject matter — eating disorders and body dysmorphia — with grace and humor, but it's Reeves who really gets the message across as the kind and charismatic Dr. Beckham.

As with some of his other successful roles, Reeves' quiet compassion and innate calm lend themselves well to this movie.

Reeves directed (and starred in) "Man of Tai Chi." 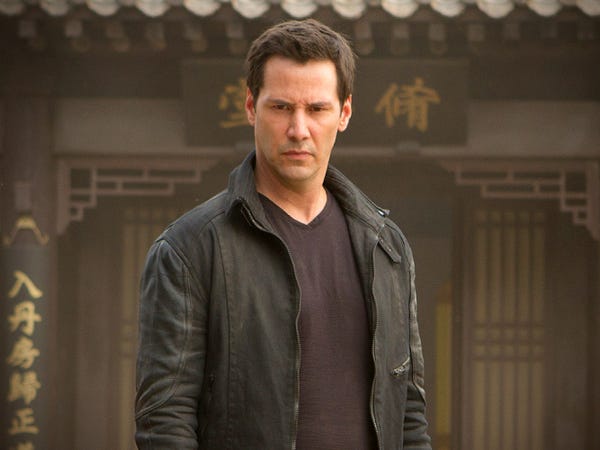 What it's about: "In this kung fu tale set in Beijing, a young man armed with incomparable martial arts skills gets embroiled in the world of underground fight clubs."

Why you should watch: This movie has everything: jaw-dropping stunts, slick action sequences, and a powerful performance by Reeves as the leader of an underground fighting ring.

While there's not a whole lot in terms of plot, the fight sequences are especially intriguing, considering that Reeves and his costar Tiger Chen did most of the stunts themselves.

"Always Be My Maybe" is a heartfelt rom-com with a hilarious appearance by Reeves. 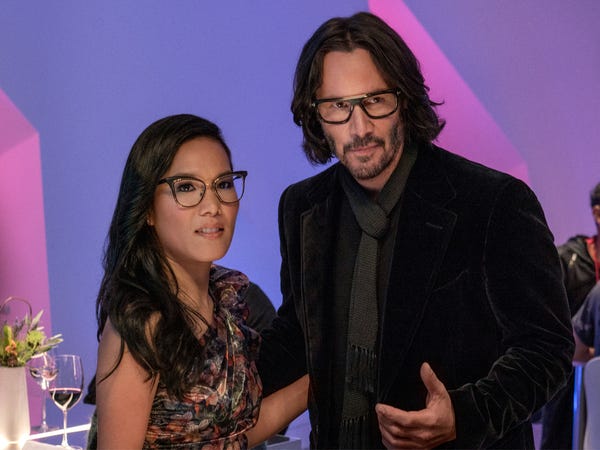 What it's about: "Reunited after 15 years, famous chef Sasha and hometown musician Marcus feel the old sparks of attraction but struggle to adapt to each other's worlds."

Why you should watch: This heartfelt, laugh-out-loud comedy is already pretty perfect, but Reeves totally takes the cake, playing an exaggerated version of himself who ends up competing with Marcus (Randall Park) for Sasha (Ali Wong).

In a departure from his previous roles, Reeves plays a domestic abuser in "The Gift." 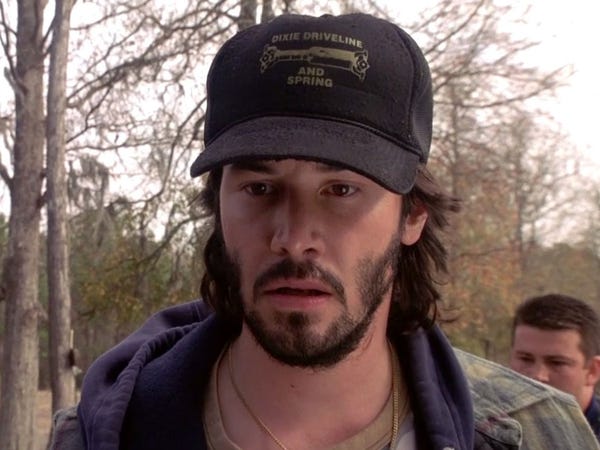 What it's about: "When the authorities find a drowned woman's body, a small-town psychic stars having visions of who committed the murder."

Why you should watch: Even though the ending is pretty unsatisfying, it's really something to see Reeves lean into his role as Donnie, a vicious small-town criminal.

Of course, his character is deplorable and terrifying, but Reeves manages to give Donnie the tiniest ounce of humanity — making the final twist feel a lot more justified.

In "The Watcher," Reeves plays a sadistic serial killer. 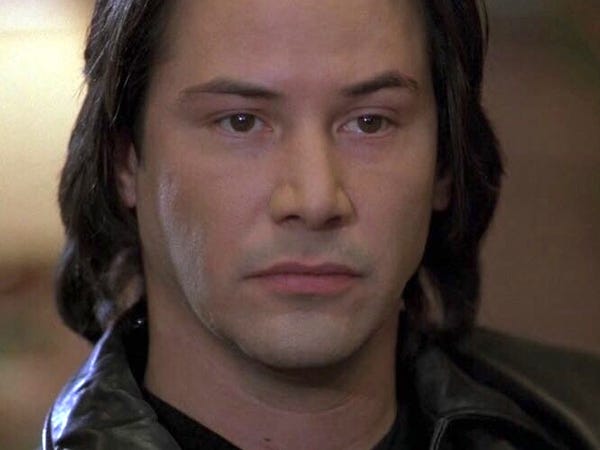 What it's about: "After failing to bust a serial killer, Joel Campbell retires. But the killer won't stop, and begins furnishing new clues designed to drive Joel mad."

Why you should watch: Anyone who thinks Reeves doesn't have range should watch this thrilling crime drama ASAP. As serial killer David Allen Griffin, Reeves is creepy, cunning, and memorable — everything you could ever want from the actor. 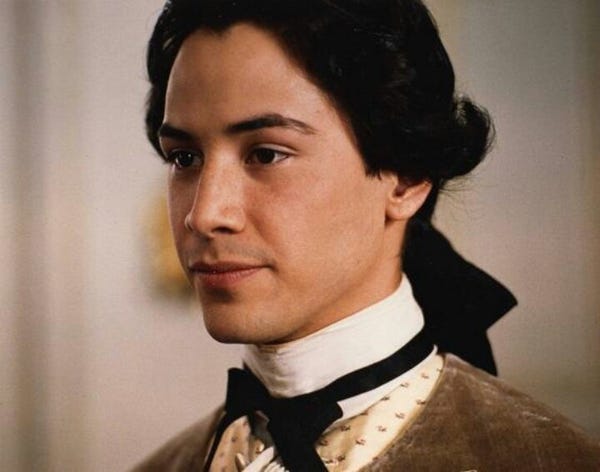 Where to watch: HBO GO

What it's about: "A top cast plays out timeless themes of lust and malice in this opulent tale set in 18th-century France."

Why you should watch: Featuring masterful performances by stars Glenn Close and John Malkovich, and an adorable Keanu Reeves decked out in period costume, "Dangerous Liaisons" is a lush and sexy period drama that, despite its star-studded cast, really lets Reeves shine as the earnest and infatuated Chevalier Raphael Danceny. 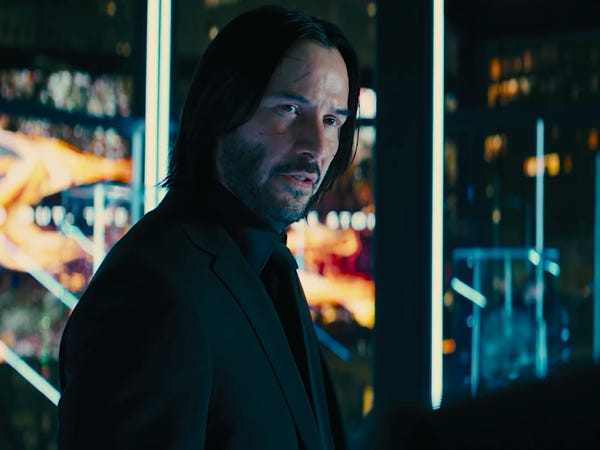 Where to watch: HBO Go

What it's about: "With a massive bounty on his head in the wake of his killing a High Table (the assassin's guild) member, the legendary hit man is left fighting for his life on the streets of New York."

Why you should watch: While it's not the best of the "John Wick" movies (that would be the first one), "Parabellum" is still a worthy installment in the franchise, and lets Reeves do what he does best: namely, killing bad guys and taking names, all while looking cool as can be.

"Bram Stoker's Dracula" is a spooky adaptation of the classic horror story. 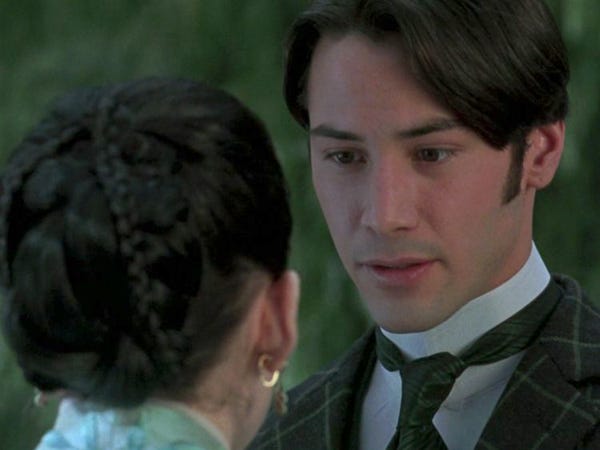 Where to watch: Crackle

What it's about: "An Oscar award-winning horror flick helmed by Francis Ford Coppola so visceral you can practically taste the blood."

Why you should watch: Reeves manages to hold his own amongst A-listers like Gary Oldman and Anthony Hopkins, and his chemistry with costar Winona Ryder is sweet and believable.

Plus, he tries his best at an English accent, and seems totally at ease in period costumes — what's not to like?