CHRISTOPHER STEVENS reviews last night’s TV: Can no one be trusted? I’ve fallen victim to a duplicitous diplodocus!

Into Dinosaur Valley With Dan Snow

Well, that’s yet another childhood illusion shattered. Dippy, the colossal dinosaur fossil that stood guard in the entrance hall of the Natural History Museum in London for decades, isn’t real.

The bones are copies, cast in plaster of Paris. Worse, they don’t even come from a single diplodocus skeleton, but are mixed and matched from at least two sets of remains.

The original is in the Carnegie Museum in Pittsburgh, said Dan Snow on Into Dinosaur Valley (C5). The fossils were first discovered on July 4, 1899, Independence Day in the States — which is why, in America, Dippy is known as the Star Spangled Dinosaur. 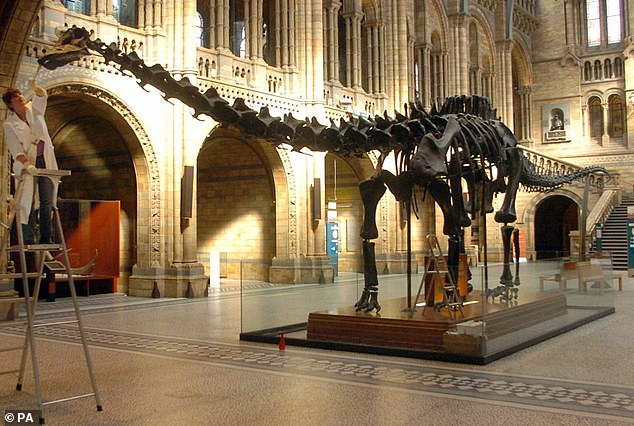 Dippy, the colossal dinosaur fossil that stood guard in the entrance hall of the Natural History Museum in London for decades, isn’t real. The bones are copies, cast in plaster of Paris

It’s fake, it’s manipulated and it’s American. The museum trustees might as well have stuck Kim Kardashian in her undies on a podium at the front doors. A generation of schoolboys would have found that equally memorable.

Dan visited both museums, but he was far happier in the wilds of Colorado and Montana. His real calling is to be an explorer, a frontiersman, but he was born a couple of centuries too late.

Abandoning his 4×4 at the roadside in a deserted mud plain, he donned his wide-brimmed hat and strode off towards the horizon, where a fossil dig was underway.

‘Welcome to Jurassic Park,’ called out a paleontologist and a wistful smile passed across Dan’s face. There’s nothing he’d enjoy more than being chased in a Jeep by velociraptors.

He had the right headgear, like Sam Neill in the movie, but it’s not a good idea to wear low-waisted chinos to an excavation. As he crouched to see the fossils being revealed, we got an unwanted glimpse of ‘dino bum’. 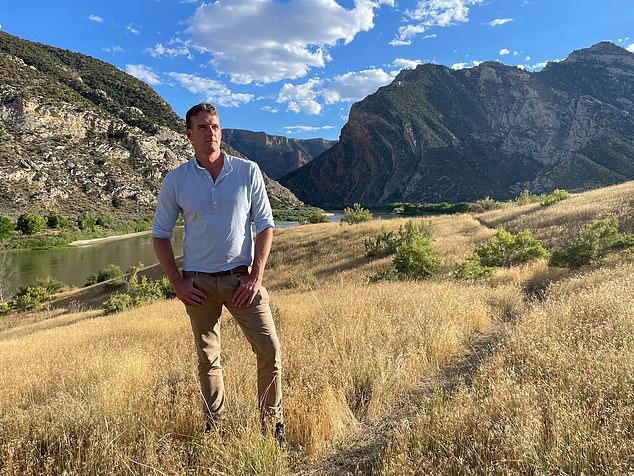 The original is in the Carnegie Museum in Pittsburgh, said Dan Snow on Into Dinosaur Valley (C5). The fossils were first discovered on July 4, 1899, Independence Day in the States — which is why, in America, Dippy is known as the Star Spangled Dinosaur

This 90-minute, one-off documentary was crammed with entertaining anecdotes. I was delighted to learn that a lifelong feud between America’s most famous fossil-hunters, Ed Cope and O.C. Marsh, began when one pointed out that the other had stuck a plesiosaur head on the wrong end of its skeleton — at the tip of its tail instead of its neck.

Some of the finds are as awe-inspiring now as they were 150 years ago, such as the thigh bone of a sauropod, as big as a tree trunk.

Dan was especially struck by the romance of a rusty can, that has supposedly lain untouched in the dust since the beginning of the 20th century. It was dropped by the team that dug up Dippy, his guide claimed. How do they know it wasn’t just the tin from a cowboy’s baked bean supper?

The aura of the Old West was also invoked by a retired Glasgow detective on The Ice Cream Wars (BBC2). ‘The police station in Easterhouse was like Fort Apache, surrounded by bad guys,’ he said.

A gritty, working class sense of humour scoured through this story of gangland enmities in the 1980s, when criminals fought to control lucrative trade on Glasgow’s housing estates.

Ice cream vans sold groceries and tobacco — and heroin, too, according to legend. Police who tried to prevent fistfights between drivers were dubbed ‘the serious chime squad’.

This two-part documentary traced the violence from its slapstick beginnings, when drivers used to squirt raspberry syrup on their rivals’ windscreens. It gummed up the wipers.

But the hostilities became barbaric, with an arson attack on one driver’s flat when petrol was poured through the letterbox. The man died, with five members of his family including a toddler aged 18 months.

Passenger of the week: Adrian Dunbar was chauffeured around Donegal’s country lanes on My Ireland (C5), with the window down and his hair whipping in the wind. He closed his eyes and drank in the air like a happy labrador. Good boy, Adrian!