Erika Girardi is hitting back. The star, who fans may also know as Erika Jayne, clapped back on Twitter after she was heavily criticized online for showing off a dressed down and casual look while out and about. “The Real Housewives of Beverly Hills” star is famous for her uber glamorous appearance and has notably showed off some of the most iconic looks in “Housewives” history since she joined the franchise for Season 6 back in 2015.

The star has also been very open about all the work that goes into keeping her glam look in check, and hasn’t been afraid to admit she spent thousands on her appearance — and we mean thousands. It’s been reported that she supposedly at one time spent $40,000 a month on looking good (which included paying a full on glam squad), though it sounds like it could actually be much more than that.

“That number is a little low, really. It’s the cost of doing business! Other people agree,” she told The Kit when asked about the eye watering figure in 2019. “You get to speak through your hair, makeup and wardrobe. I’m communicating through costume,” she added.

Well, it seems like that may have changed since Erika hit the headlines in late 2020 for being hit with a lawsuit alongside her estranged husband, Tom Girardi. The two were accused of allegedly embezzling money to fund their “outrageous lifestyles” by divorcing (per Page Six).

Read on for what Erika is saying now.

Erika Girardi slammed trolls who called out her casual look 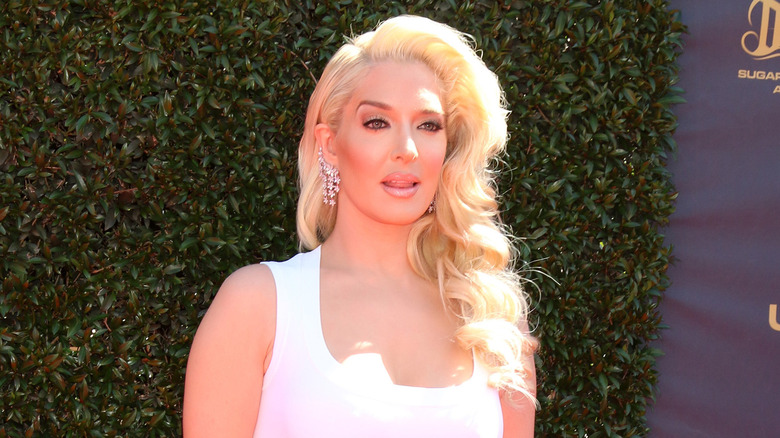 Erika Girardi, aka Erika Jayne, was firmly back in the spotlight after candid snaps surfaced online that showed her pumping her own gas while out in California on June 21. The reality star ditched her signature glam, curve hugging ensembles for a green t-shirt, black leggings, and white sneakers. She wore her blonde hair down and shielded her eyes with white framed sunglasses.

A number of outlets made a point of showing off Erika’s new look. Daily Mail pretty harshly described her as looking “disheveled” with “messy hair,” despite the star still looking great as she opted for comfort.

Well, Erika being Erika, she wasn’t about to take the criticism lying down. The star hit back on Twitter on June 22 after the snaps went viral on social media. “Goodnight Twitter, please be in full glam when pumping gas. Apparently it’s a big deal,” she sarcastically tweeted, alongside an eye rolling emoji.

The message came after the star also retweeted a few messages from fans defending her. One posted a GIF that showed Erika on “The Real Housewives of Beverly Hills,” saying, “It ain’t glamorous man,” to which Erika added, “Seriously though.” Another fan noted, “this has always been her when she’s just hanging with her friends. but go off i guess,” to which Erika wrote, “Exactly.”