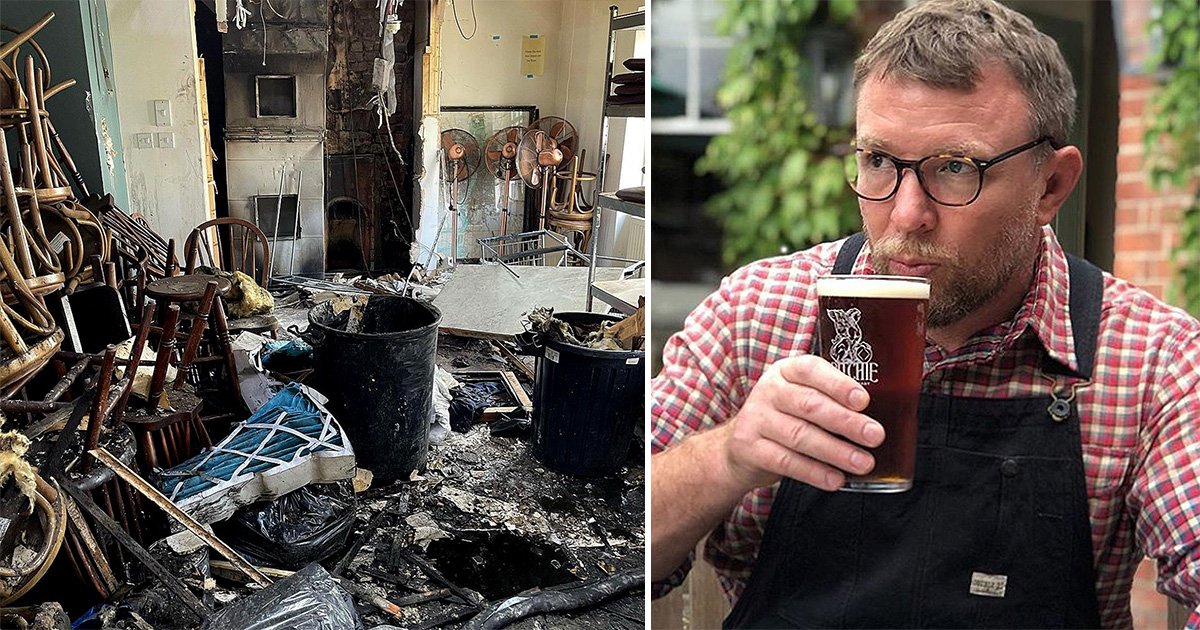 Guy Richie has shared a picture of the devastation caused by a fire to his Lord of the Land pub while expressing his admiration for the London Fire Brigade.

The director, 52, posted a video of firefighters battling the blaze and a photo of the burned out interior of the venue on Instagram on Thursday.

The establishment was left in ruin after 70 firefighters and 10 fire engines attended the scene in Conway Street, Fitzrovia on Wednesday, with the fire believed to have started in the extraction system on the first floor.

In a separate image, the blackened interior of the building could be seen, showing how the flames had wrecked the public house.

The London Fire Brigade arrived at the scene shortly after midday on Wednesday after plumes of smoke were scene billowing from the building.

Station Commander Jason Fisby said: ‘The fire is within the extraction system from the first floor to the roof vent. There are no reports of any injuries.’

LFB also tweeted: ‘The fire is in the extraction system and access to the fire is challenging. We now have 10 fire engines & around 70 firefighters attending.’

Guy, whose £10m home was targeted by burglars in December, opened the pub last year and serves beer from his Gritchie Brewing Company.

The Lock, Stock and Two Smoking Barrels director bought the Mitchells & Butlers business in 2018 after previously owning a Mayfair pub while married to Madonna.

Together, the former couple purchased the Punch Bowl in 2008 for a reported £2.8million, and it was frequented by the likes of David Beckham and Leonardo DiCaprio. However, it was sold in 2013.

In November, the filmmaker hosted the wrap party for his movie Wrath of Man at his Lore of the Land pub.

Alongside footage of their evening, Ritchie wrote in an Instagram post: ‘Last year I spent a great Thanksgiving with some of the Wrath Of Man cast @loreofthelandpub. This year looks a little bit quieter. Wishing my American friends a happy Thanksgiving, no matter how and where they’re celebrating.’