President Biden has delivered countless speeches during his political career, and getting in front of the microphone is all in a day’s work when you’re leading the United States.

However, Biden’s fumbling over his words does not go unnoticed by critics, even though he has openly discussed his stutter, according to CTV News. NYU professor and speech therapist Eric S. Jackson said it’s not uncommon for people with a stutter to be viewed as “slow, less intelligent, or anxious,” CTV News reported. “In the most general sense, stuttering is a person knowing what they want to say, but in that moment, their body breaking down and them not being able to say, and this is due to a combination of genetic, neurological, and environmental factors,” he said to the outlet. He continued, “But the important thing to know about stuttering is that you can’t always see it.”

Jackson believes Biden’s blinking and downward glances are known as “compensatory behaviors” as a way to “jolt” him “out of a moment of stuttering.” Although it appears that Biden makes a conscious effort to practice his speeches, he’s in the headlines for his June 23 speech on gun control. Keep reading for more details. 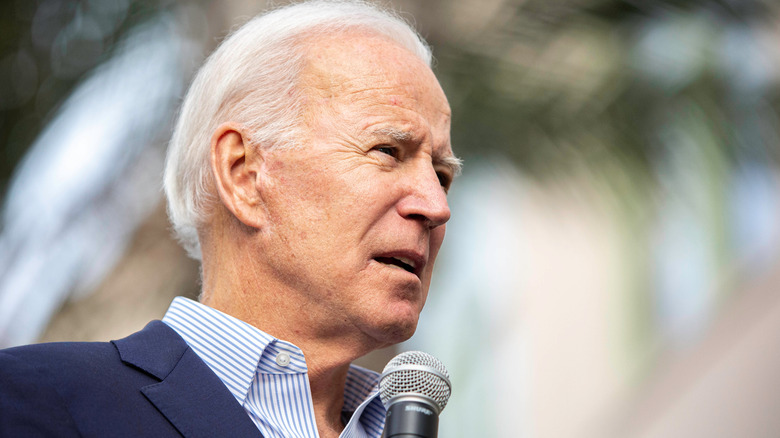 President Joe Biden’s latest speech seemingly did not go over well, and he reportedly “slurred his words,” according to the New York Post’s editorial board. He reportedly could not pronounce “cognitive.” The National Review also criticized Biden’s speech, implying that it was incoherent. However, plenty of other Twitter users called out those who mocked Biden’s apparent stutter.

Biden centered his speech around crime and gun violence, but per the Post, he referred to the ATF as “the AFT.” He went through the Second Amendment and mentioned “the blood of patriots” and said that if someone wanted to take down the government they would need F-15s or nuclear weapons. “Nothing I’m about to recommend in any way impinges on the Second Amendment,” Biden said (via Forbes). “But no amendment to the Constitution is absolute.”

Despite Biden’s apparent stumbling through his speech, many politicians weighed in on the content of his words. Republicans Mike Rogers of Alabama and Mike Waltz of Florida voiced their opposition to the president’s words, while Democrats Diana DeGette of Colorado and Stephanie Murphy of Florida shared their support for Biden’s speech. The words themselves are more important than their delivery, after all.