Skip to content
HomeCelebritiesJohnny Depp and Amber Heard – whose horror story do YOU believe?

Whose horror story do YOU believe? Team Johnny Depp says Amber Heard attacked him and almost cut his finger off, while her side claims he’s a violent drug-using bully who threatened to burn and drown her. Now the courts must decide…

Their toxic split in 2016 — with accusations of domestic abuse, sexual jealousy, narcotics and boozing — was thought to have been one of the most lurid and acrimonious in Hollywood history.

But the ugly story of Johnny Depp versus Amber Heard is far from over. Indeed, nearly four years after the actors separated, they are fighting again in two separate legal actions on both sides of the Atlantic.

Ms Heard, 33, who previously alleged Depp beat her, now says she feared for her life during their relationship and that he choked her and ripped out her hair. His side insist her allegations are ‘a hoax’, that she hit him and went so far as to ‘paint on’ her bruises.

On Wednesday, Depp, 56, was at the High Court in London wearing a three-piece suit, scarf, silver jewellery and dark glasses, for a preliminary hearing.

Disastrously for him, some 70,000 private text messages from his phone were shared, including one from 2013 that read: ‘Let’s burn Amber.’ The case is expected to come to full trial next month. Here, ALISON BOSHOFF examines what revelations are yet to come . . .

The stormy romance that turned into a bitter split

Depp and Heard met in 2009 when she was cast as his love interest in a movie called The Rum Diary.

They were first romantically linked in June 2012, just as Depp was splitting from Vanessa Paradis, his partner of 14 years.

From the outset, it was a tempestuous liaison. By September 2012, Heard had dumped him — apparently finding him too possessive. He wooed her back by sending her a bouquet of roses and a poem every day.

He was smitten, even ‘obsessed’ by Amber, 23 years his junior, who has been described by one friend as being ‘a strong, out bisexual woman’. 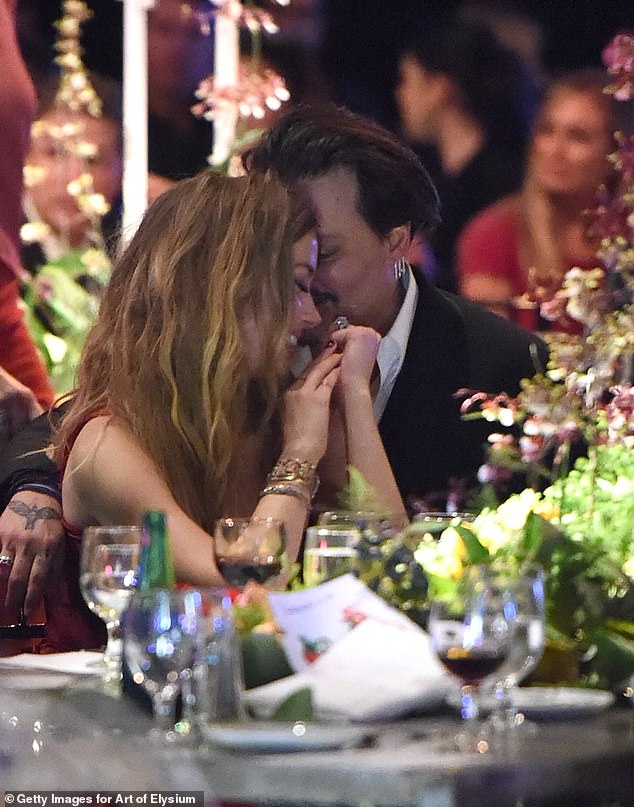 Before she began dating Depp, she had a long romance with a female photographer named Tasya van Ree, and is currently in a romance with cinematographer Bianca Butti.

In May 2013, Depp bought a ranch in Nashville, Tennessee, for them to live on together, and by January 2014 they were engaged.He told an interviewer: ‘She’s a wonderful girl. She’s sharp as a tack. A southern belle and sweet as can be, and very good for me.’

He even said he hoped they could have children together. The couple married in front of 24 guests on the beach on his Caribbean island.

Was marrying her the cause of his mid-life crisis, or a symptom of it? Certainly their marriage coincided with a down-turn in his fortunes. Depp, who became a famous hell-raiser during his vodka and cocaine years with model Kate Moss, started drinking again in 2014 after a sober period.

His 2013 film The Lone Ranger was a big budget flop, as were the gangland thriller Black Mass and comedy drama Mortdecai.

The filming of Pirates Of The Caribbean: Dead Men Tell No Tales in Australia was even more of a disaster. Filming was halted while Depp had emergency treatment on his hand, allegedly injured during a row with Heard.

The couple also ran into trouble in 2015 after being caught trying to smuggle their dogs Pistol and Boo illegally into Australia on a private jet. Depp and Heard posted an excruciating video apologising for breaking Australia’s quarantine laws, and advising travellers to respect them.

She filed a restraining order against him a month later, saying she was ‘extremely afraid’ of the star.

Heard filed for divorce 15 months after their February 2015 marriage and three months later it was all over.

Their divorce became final in early 2017, Heard receiving a $7 million settlement — paltry against Depp’s £400million fortune. She also had to pay her own legal fees.

She nonetheless donated the sum to the American Civil Liberties Union ‘with a particular focus to stop violence against women’.

A joint statement was released which ran: ‘Our relationship was intensely passionate and at times volatile but always bound by love.

‘Neither party has made false accusations for financial gain. There was never an intent of physical or emotional harm. Amber wishes the best for Johnny in the future.’

A wealth of new evidence looks certain to be aired, among it possibly a 30-minute audio tape, released to the media in August 2018, in which Heard seems to admit to ‘hitting’ Depp.

She tells the actor that she cannot promise that she will not ‘get physical again’.

A spokeswoman for Heard said: ‘Anyone familiar with the dynamics of domestic abuse would immediately recognise what is really going on here.

‘Throughout the extended tape recording that Johnny Depp vindictively turned over to the Press, Ms Heard repeatedly attempts to placate Mr Depp, ignore his accusations and force him to acknowledge what was really happening in their relationship.’

More fresh evidence will come from the cache of 70,000 text messages that Depp’s former legal team accidentally shared with News Group Newspapers. At the preliminary hearing at the High Court, the court heard a selection of those text messages, which Depp reportedly sent to his friend, actor Paul Bettany.

The actor allegedly wrote in November 2013 — two years before they married — ‘Let’s burn Amber.’ Later on the same day, he reportedly wrote: ‘Let’s drown her before we burn her!!! I will f*** her burnt corpse afterwards to make sure she is dead.’ 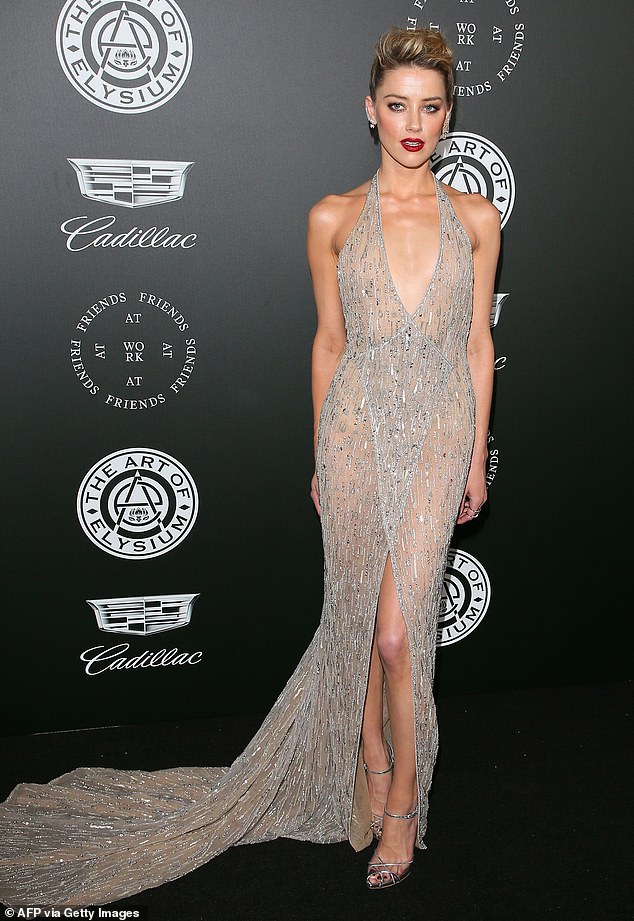 The court also heard another rambling text from Depp: ‘I’m gonna properly stop the booze thing darling. Drank all night before I picked Amber up to fly to LA this past Sunday . . . Ugly, mate . . . no food for days . . . powders . . . half a bottle of whiskey, a thousand Red Bull and vodkas, pills, two bottles of champers on plane and what do you get . . . an angry aggro Injun in a f***in blackout screaming obscenities and insulting any f*** who got near. I’m done. I am admittedly too f***ed in the head to spray my rage at the one I love . . . for little reasons, as well I’m too old to be that guy — but pills are fine!!!’

The newspaper’s barrister Adam Wolanski QC called the messages ‘very damaging’ to Depp’s cases. He explained that they corroborated an account given by Heard of an argument on a private jet from Boston to LA, during which Depp allegedly kicked her and threw a boot at her before passing out.

Depp’s lawyers deny the account, calling it ‘part of an elaborate hoax to generate positive publicity for Ms Heard’.

The trial is set to rake over various marital rows, including one over a painting.

Wolanski said: ‘The claimant was drunk and high on drugs, angry at Ms Heard because she had hung up a painting. It is claimed that he hit her so hard that blood from her lip ended up on the wall.

‘The claimant sent her a message referring to that evening as a “disco bloodbath” and a “hideous moment”. ’

Wolanski insisted the texts shed a light on Depp’s mental state, and misuse of alcohol and drugs. Depp’s barrister, meanwhile, insisted there was no ‘smoking gun’ that proved Depp assaulted Heard.

Depp is suing News Group Newspapers, the parent company of The Sun, over a 2018 article alleging he abused Heard during their turbulent 18-month marriage.

The legal case has reopened lurid claims of domestic abuse in Depp’s marriage to Heard, which ended in 2017.

Referring to claims that Depp physically assaulted Heard, the actor’s barrister David Sherborne said on Wednesday: ‘These are extremely serious criminal allegations made against Mr Depp by Ms Heard and he has a right to have himself publicly vindicated.’

The lawyer went on: ‘It is black and white. One person is lying and one is not. We say it is Ms Heard, and Mr Depp is 100 per cent clear about that.’

The High Court hearing is scheduled to begin on March 23. Both Depp and Heard will attend.

Some of their friends and associates are also expected to fly to London to give evidence, others may give testimony via video link.

The second lawsuit, taking place in the U.S., is a civil defamation suit in which Depp is suing Heard personally for $50 million.

It was sparked by her writing an article in The Washington Post in 2018 which appeared to talk about his alleged abuse against her without referring to him by name.

The piece was titled: ‘I spoke up against sexual violence — and faced our culture’s wrath. That has to change.’ Depp filed a lawsuit against her in March 2019. The complaint argued it was clear Heard was referring to Depp in the column, even though it didn’t name him.

The suit added that Depp has suffered financial losses because of the accusations, including being dropped from his role as Captain Jack Sparrow in the Pirates Of The Caribbean film franchise.

This case is due to be heard from August 3.

She hit me/He hit me

Depp’s lawyers say they have ‘overwhelming video, photographic and eyewitness evidence’ that will clear his name. He alleges Heard was the aggressor and once stubbed a cigarette out on his face.

‘She was the perpetrator, and I was the victim. While mixing prescription amphetamines and non-prescription drugs with alcohol, Ms Heard committed innumerable acts of domestic violence against me,’ said Depp in his court complaint.

His lawsuit also describes an incident in which Heard allegedly ‘shattered the bones in the tip of Mr Depp’s right middle finger, almost completely cutting it off’ when she threw a glass vodka bottle at him in Australia. 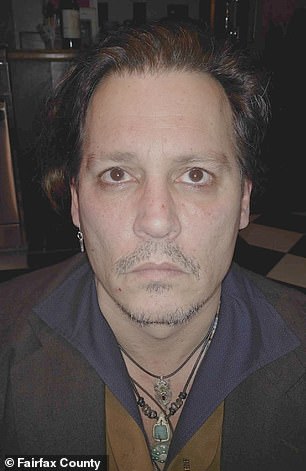 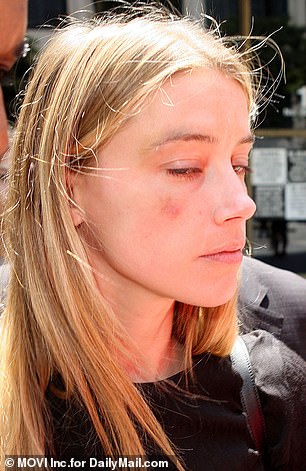 Her claim describes how Depp repeatedly slapped and abused her.

She claims he started abusing drugs and alcohol in 2012 and became ‘a totally different person’. She added: ‘We called that version of Johnny “the monster.” ’

Among the allegations are that a month into their marriage, he embarked on a three-day ecstasy binge in Australia, and during an argument over drug-taking allegedly slapped her and punched her to the ground. He then threw a glass and a table at her.

She also claims he threw her phone into her face and a neighbour intervened.