LeBron James’ children have serious talent, and not just at hoops. His daughter Zhuri fearlessly led her family in a TikTok dance session where she showed off her killer moves.

It’s always a treat when LeBron James gets together with his kids for a TikTok dance video. This time around his adorable six-year-old daughter Zhuri led the session, set to DJ Shawny‘s “Go Daddy Go.” She mouthed along the lyrics to the opening lines as she did a dance routine to the beat of the song. Zhuri pumped her arms, swung them on either side of her body and then when the line came about, “Now pass it to my brother, let’s go” she motioned behind her with her hands for her brothers to follow her as she hopped offscreen.

The video was a family affair, as mom Savannah shimmed across the screen, followed by the couple’s sons, Bryce, 13, and Bronny, 16. Their NBA superstar dad LeBron, 36, brought up the rear, holding up his hands to his chest and seeming to do a series of bunny hop moves, which you can watch in the below video.

Zhuri sure has grown up! She wore her hair in long braids in the video, and donned a white t-shirt with a colorful pink tulip print on the front. Zhuri had on tan leggings, which were perfect to bust out dance moves in. There appeared to be a bunch of balloons on the ceiling that were just out of the camera’s frame, as their curly strings could be seen hanging down into the top of the video. It looked like the family TikTok dance might have been part of a Mother’s Day celebration, as LeBron posted the video to Instagram the day after the holiday on May 10. 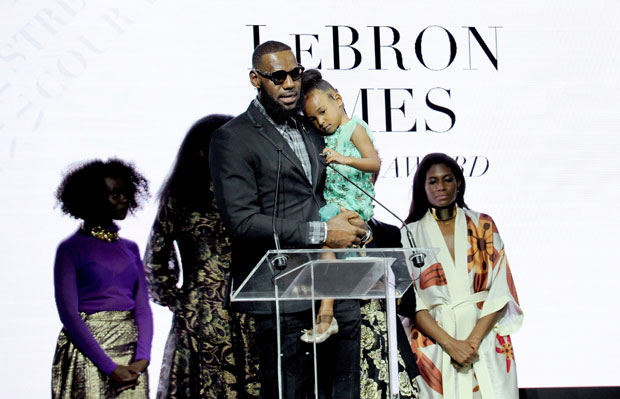 Zhuri proved to have quite a fan club among the Lakers superstar’s Instagram followers. User @wslam cheered, “WE STAN QUEEN ZHURI,” while @nnekaogwumike noted, “This is Zhuri’s world, we’re just living in it.” Fan @briah_2014 commented, “Zhuri never disappoints!!!” while @janikabates gushed, “I freaking love this family!!!”

LeBron and his family definitely provided plenty of amazing dance content during the 2020 COVID-19 home lockdown. Everyone took part in the viral dance challenge to Wiz Khalifa & Ty Dolla Sign’s song “Something New” on March 22. They also joined together to crush a routine to MC Hammer‘s Can’t Touch This. As fan @thehoopfilms so accurately pointed out in the new TikTok video led by Zhuri, “The James family got moves,” as they’re still dancing as a crew even with quarantine being over.