Skip to content
HomeCelebritiesLeona Lewis Speaks Out Against Michael Costello

Leona Lewis is speaking out against Michael Costello.

The “Bleeding Love” singer, 36, took to Instagram Story on Tuesday, claiming the fashion designer humiliated her at a 2014 charity event and left her with body insecurities for years. Lewis’ comments came one day after Costello accused Chrissy Teigen of bullying. ET has reached out to Costello for comment.

“I usually don’t speak on subjects like this. But honestly I feel that I have to say something as I’ve dealt with years of insecurity from it. I don’t condone any kind of bully behavior and I’m sorry for what Michael Costello went through,” she began. “I wanted to share my experience in 2014. I was asked to take part in a fashion show to raise money for charity. Michael Costello was assigned as my designer. As an excited young woman, I flew all the way to New York and was so honored to work with him because I adored his dresses.” 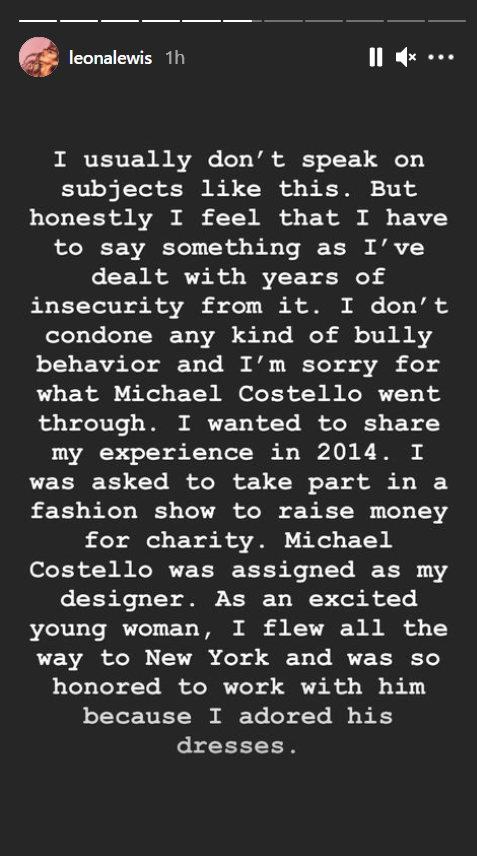 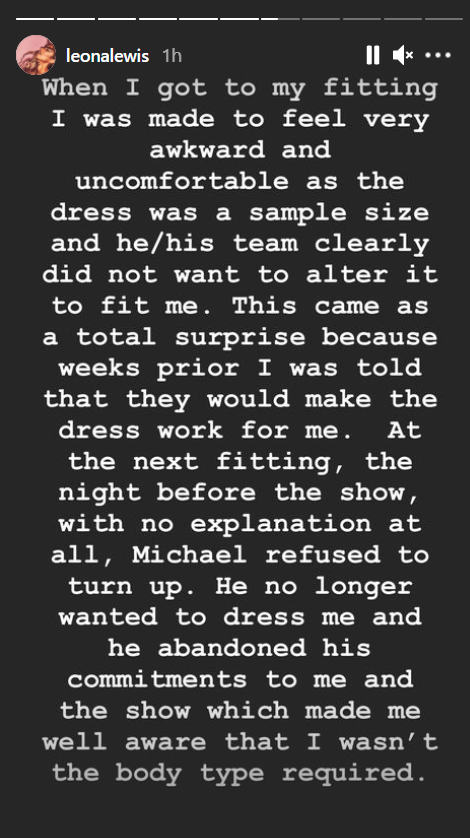 She continued by claiming that when she got to the fitting she “was made to feel very awkward and uncomfortable as the dress was a sample size and he/his team clearly did not want to alter it to fit me.”

“This came as a total surprise because weeks prior I was told that they would make the dress work for me. At the next fitting, the night before the show, with no explanation at all, Michael refused to turn up,” she claimed. “He no longer wanted to dress me and he abandoned his commitments to me and the show which made me well aware that I wasn’t the body type required.”

Lewis added that she was “so embarrassed and deeply hurt” because she didn’t look like a model size and was “not permitted to walk in his dress.” Lewis said she then had to sit in the audience and tell reported lies about why she wasn’t walking in the show. 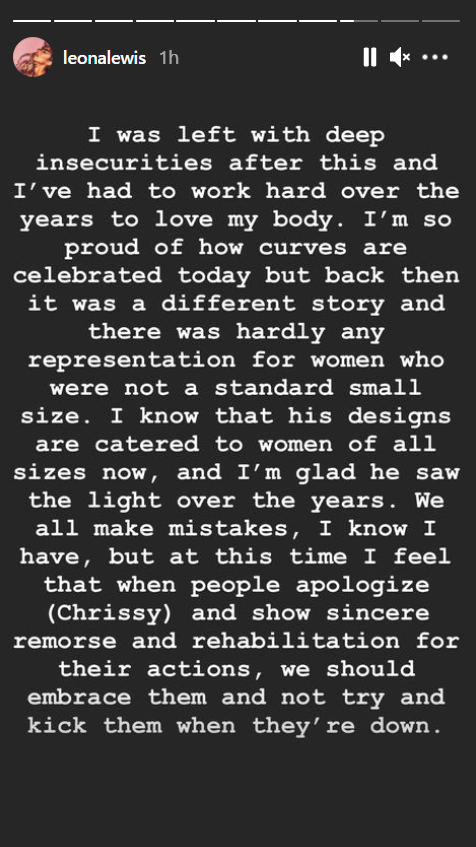 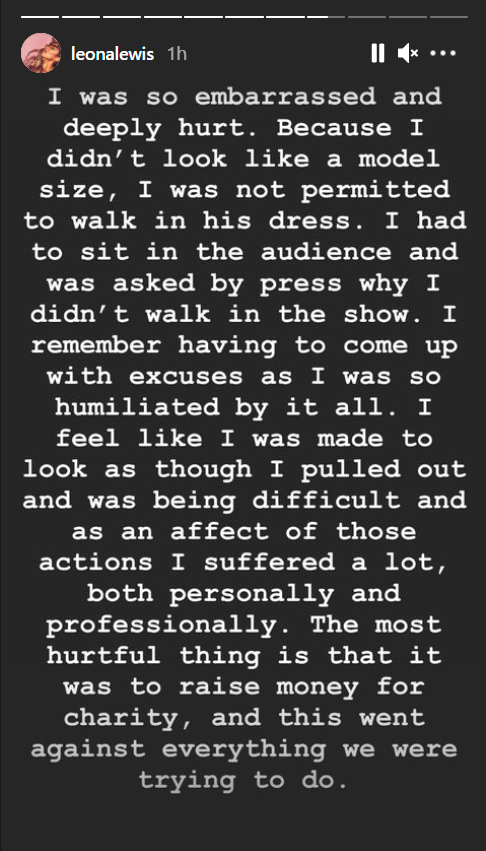 “I suffered a lot, both personally and professionally. The most hurtful thing is that it was to raise money for charity, and this went against everything we were trying to do,” she wrote. “I was left with deep insecurities after this and I’ve had to work hard over the years to love my body.”

She added that she’s glad that Costello’s clothes now cater to women of all sizes and that people all make mistakes. However, she couldn’t stay silent after Costello’s accusations against Teigen.

“I’m not discounting Michael’s experience as that is an awful thing to go through and I wish him so much love and healing. I’m sure this will come as a shock as I never told him how this made me feel,” Lewis shared. “But the pot calling the kettle black in this situation doesn’t sit right with me. Bullying comes in many different forms. We need love, we need accountability, we need forgiveness, none of us are perfect.” 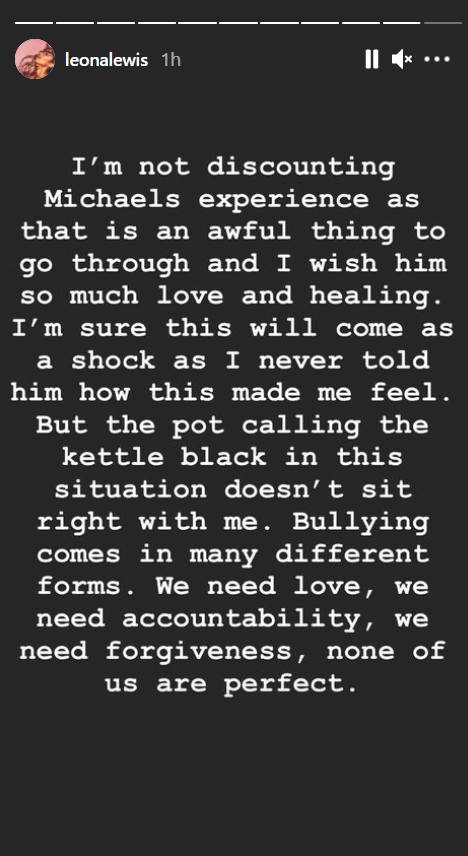 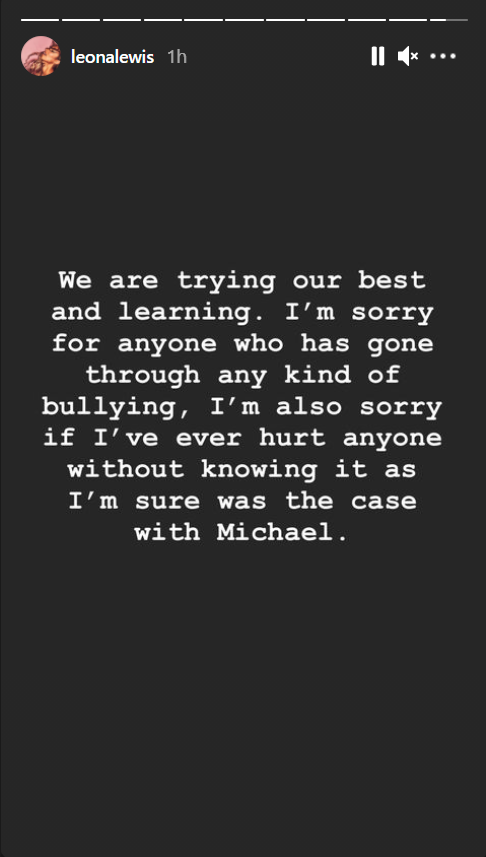 Shortly after, Costello took to Instagram Story to address the singer’s comments.

“No dis, no shade, no hate. I love you and your music I still follow you but not sure what happen,” Costello wrote alongside a screenshot of Lewis in a red gown. “I’ve reached out to you personally and have 7 emails from the last 4 years and these past 9 weeks from your team and stylist still requesting looks. Last email 05/17/21.”

He added that he’s still a fan and “not coming for you,” suggesting that they talk about what she was feeling at that time because he thought she was happy. 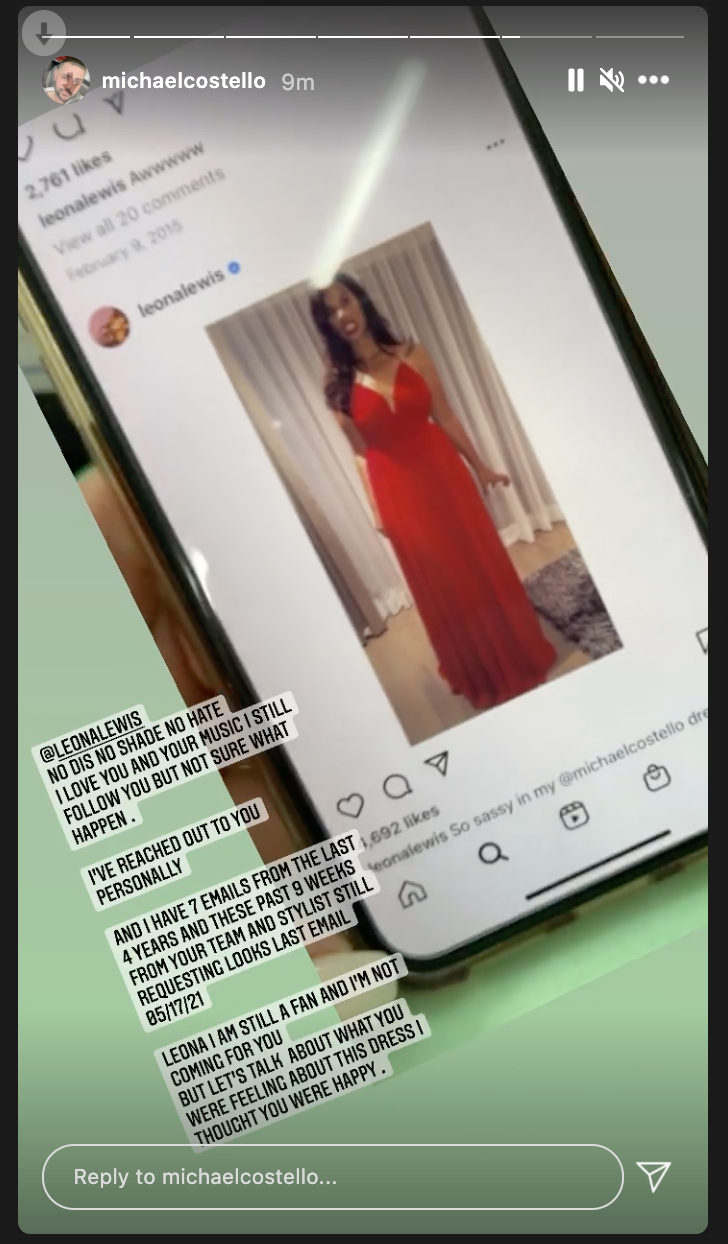 He also posted a screenshot of a photo of the two together, as well as showed an email from her stylist requesting a look.

“If I made you feel bad in 2014 but you still wore my dressed and request them, can we try and figure out what got lost in translation,” he added in part. 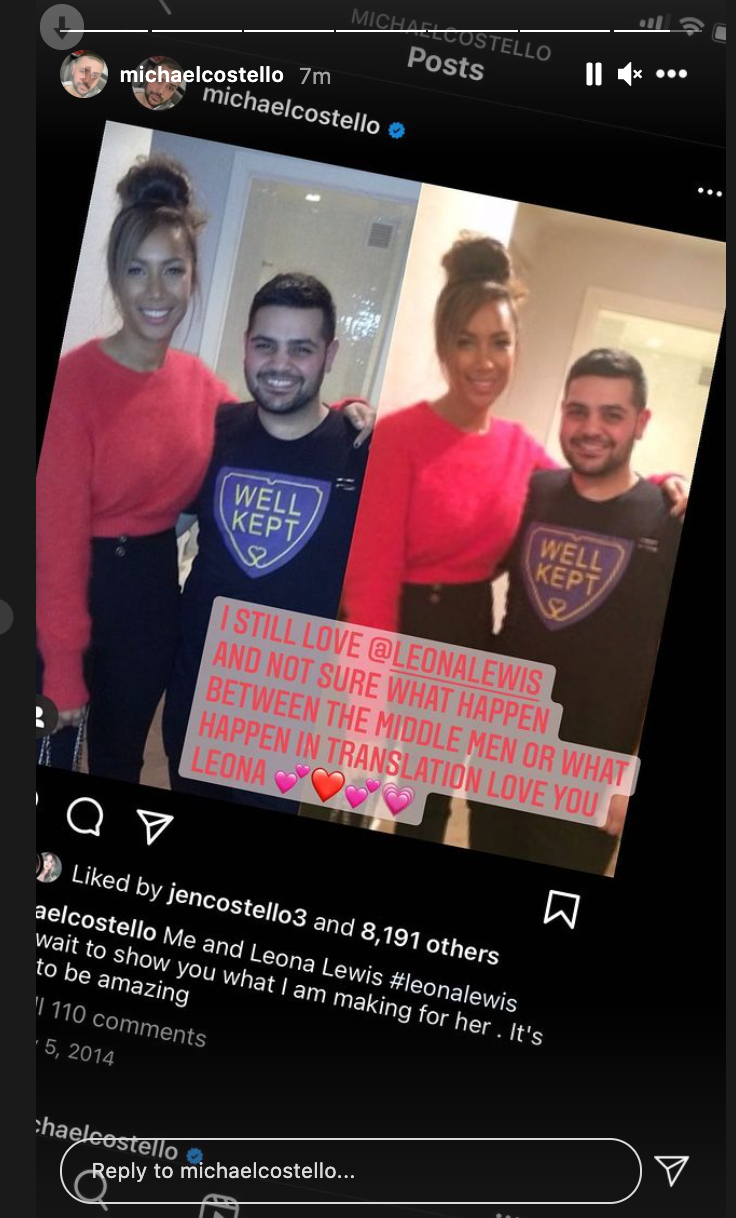 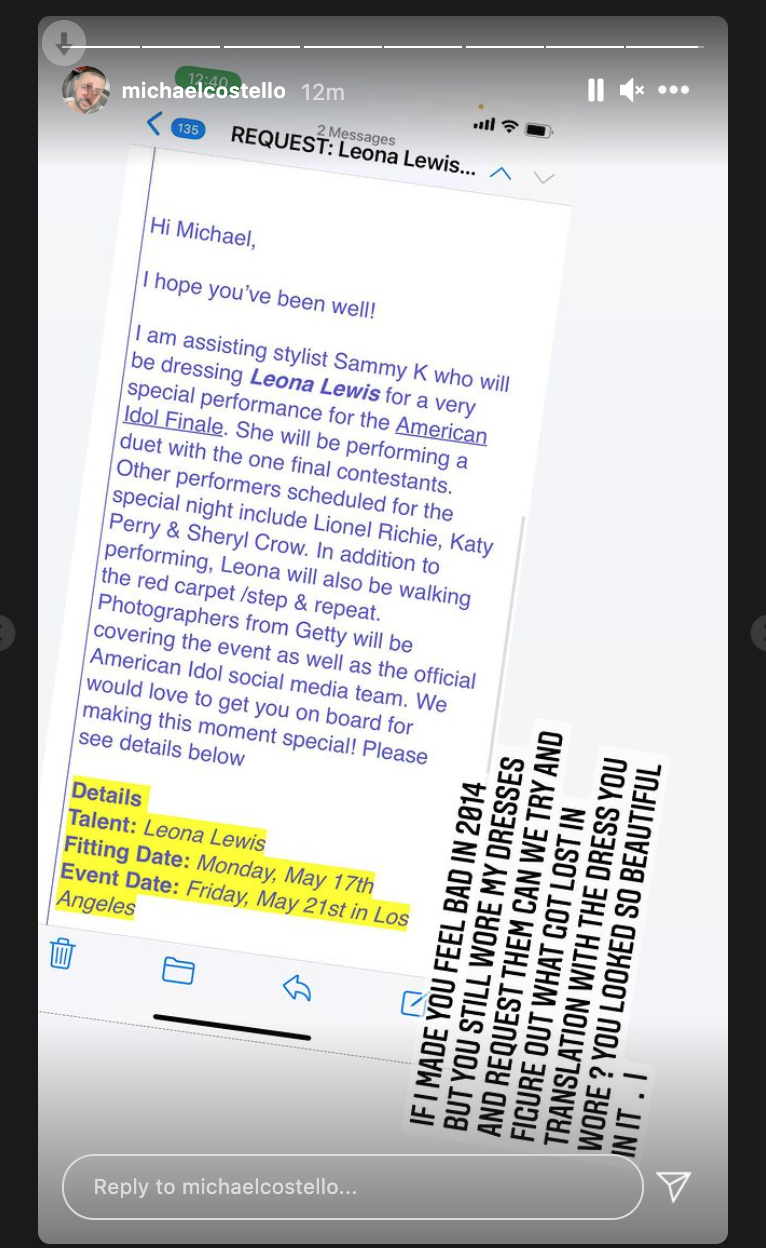 On Monday, Costello opened up about how alleged bullying by Teigen and her stylist, Monica Rose, made him suicidal. After sharing his claims against Teigen, Costello said that he still hadn’t heard from Teigan, adding in a statement to ET, “I want to be clear – I do not wish ill on anyone. We are all works in progress and we deserve the opportunity to prove that we can do better. But progress takes time. We must show through actions that we have changed. After all, actions speak much louder than a 10-minute apology written on a notepad.”

“However, nothing takes away from the years of trauma being bullied and blacklisted in the industry has left me. I am not out for revenge. I only wish to speak my truth because I have been silenced for so long,” he continued. “I’m still waiting for Chrissy Teigen and anyone who bullied me to reach out to me. If they truly acknowledge that their actions are wrong, I welcome them with open arms to have a real conversation.”

In her Monday post, Teigen said she’s “in the process of privately reaching out to the people I insulted.”

“I understand that they may not want to speak to me,” she wrote. “I don’t think I’d like to speak to me. (The real truth in all of this is how much I actually cannot take confrontation.) But if they do, I am here and I will listen to what they have to say, while apologizing through sobs.”

For more of Teigen’s apology, watch the video below.