Never Have I Ever is officially back in July!

Netflix just revealed exactly when we can expect the second season of the Maitreyi Ramakrishnan-led comedy series.

Never Have I Ever‘s season two will be out on July 15th, and the season trailer will be out NEXT Thursday (June 17).

The cast of the show – Maitreyi, Darren Barnet, Jaren Lewison, Lee Rodriguez, Ramona Young, Poorna Jagannathan, Richa Moorjani, and Megan Suri – as well as creators Mindy Kaling and Lang Fisher, will take part in a fan-focused event featuring games, a fan Q&A, and teaser clips, all leading up to a live debut of the season two trailer. Check out the invite below! 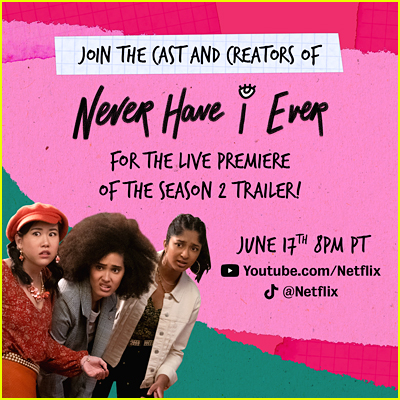 If you missed it, there are two new additions to the cast this upcoming season!

A post shared by Never Have I Ever (@neverhaveiever)