On the anniversary of John Lennon’s fatal shooting, the remaining Beatles – Paul McCartney and Ringo Star – joined John’s widow, Yoko Oko, to reflect on the ‘great joy’ he brought to the world.

“A sad, sad day but remembering my friend John [Lennon] with the great joy, he brought to the world,” Sir Paul McCartney posted on Dec. 8, the 40th anniversary of John Lennon’s death. The “Imagine” singer was shot and killed in front of his New York City apartment on this day in 1980. Paul, 78, observed this solemn anniversary by sharing a black and white picture of him and his fellow Beatle sitting side-by-side. “I will always be proud and happy to have known and worked with this incredible Scouser! X love Paul.”

“Tuesday, 8 December 1980, we all had to say goodbye to John peace and love John,” tweeted Ringo Starr, the other surviving member of the Fab Four. Ringo, 80, also shared a picture of him with John, both Beatles sitting on the front bumper of a car. To celebrate the life and legacy of John, Ringo made a simple request: “I’m asking every music radio station in the world sometime today play ‘Strawberry Fields’ Forever. Peace and love.”

John’s widow, Yoko Ono, was by his side with him when Mark David Chapman gunned him down in the archway of The Dakota on Manhattan’s Upper West Side. The killing came hours after Mark’s first encounter with Lennon outside the Dakota, one where Chapman got Lennon to sign a copy of his album, Double Fantasy.

“The death of a loved one is a hollowing experience,” Yoko tweeted on the anniversary of her husband’s murder. “After 40 years, [John’s sons Sean Lennon and Julian Lennon] and I still miss him.” She quoted her late husband’s song “Imagine” (“Imagine all the people living in peace”) while sharing an infographic that claimed, “over 1,436,000 people have been killed by guns in the U.S.A.” since John’s shooting. 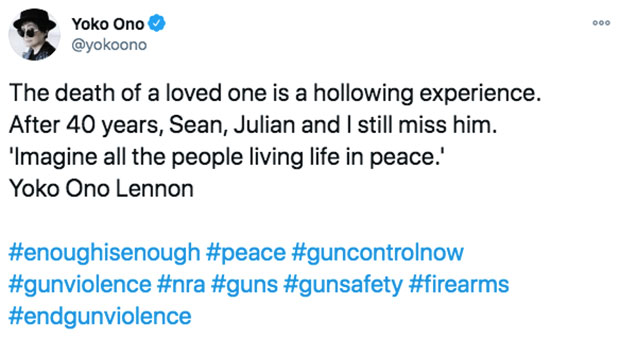 Julian Lennon – the 57-year-old son of John and his first wife, Cynthia Lennon – posted a picture of his father with the message, “As Time Goes By…” His half-brother, Sean, 45, shared a family photo featuring John, Yoko, himself, and older brother Julian. 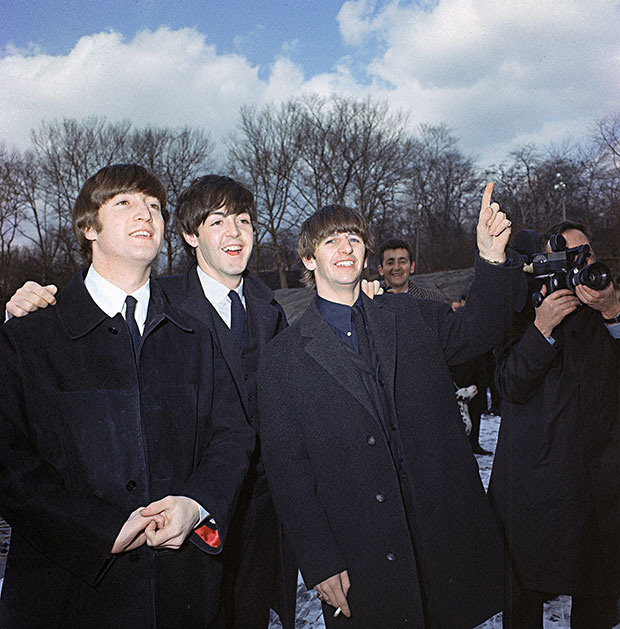 In August, Mark David Chapman, 65, was denied parole for the 11th time, per Rolling Stone. Mark was sentenced to 20 years to life in 1981, after pleading guilty to killing Lennon. In the 2020 parole plea, Mark stated that he’s since “found Jesus” and has felt “more and more shame” for the crime with each passing year. He also reportedly said he’s willing to serve his penance in jail “however long it takes, forever.”

Chapman, a fan of the Beatles, was reportedly incensed with John’s comments about how the Beatles were “more popular than Jesus.” In the lead-up to the murder, Chapman became obsessed with the art of Todd Rundgren and the novel, The Catcher in the Rye. While these have been theorized as to why Mark shot John Lennon, he said in a 2010 interview that he did it for notoriety.

“I felt that by killing John Lennon I would become somebody, and instead of that I became a murderer, and murderers are not somebodies,” said Chapman, per The Guardian. Eight years later, he expounded on how he struggled with going through the killing. “I was too far in. I do remember having the thought of, ‘Hey, you have got the album now. Look at this, he signed it, just go home.’ But there was no way I was just going to go home.”