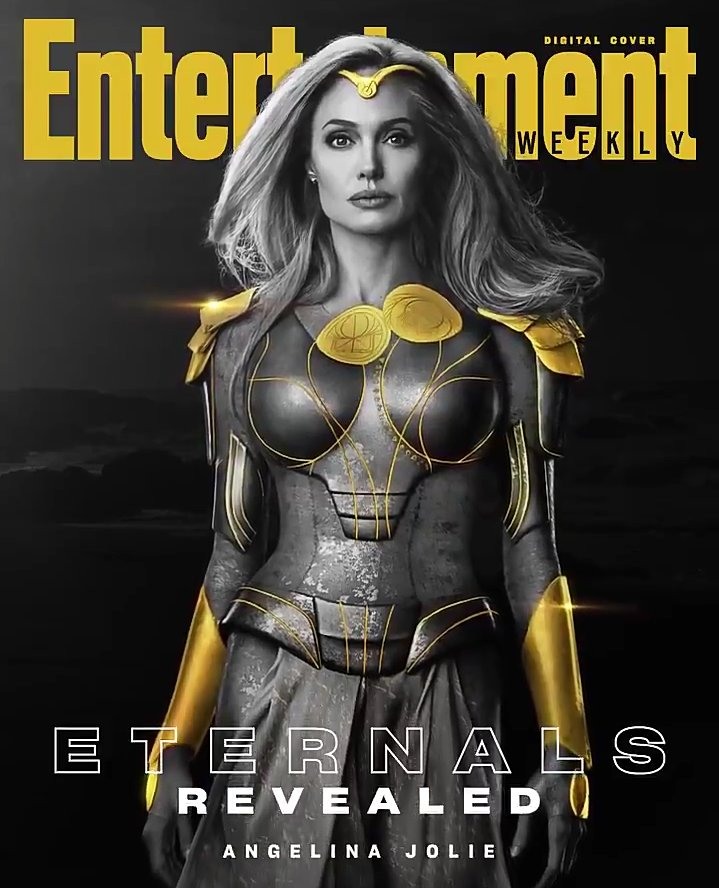 I still say that Marvel’s The Eternals is nothing more than a fancy version of The History Channel’s Ancient Aliens. That’s all! The Eternals are fancy aliens who travel to earth at the dawn of civilization and decide to “help” humans become more civilized and sh-t. Like, they teach them about irrigation and architecture and probably weaponry as well. Still, I will see this mess, if only for Angelina Jolie, Kumail Nanjiani, Gemma Chan and Richard Madden. And the others!

This week’s Entertainment Weekly devotes their issue to individual covers for all of the Eternals’ characters. Gemma as Sersi, Salma as Ajak, Richard as Ikaris, Angelina as Thena, Kumail as Kingo, Brian Tyree Henry as Phastos and more. You can see all of the individual character posters here, and you can read EW’s exclusive cover story here. Here are some of the Angelina-specific parts:

Jolie on watching the film come together: Jolie is certainly no stranger to blockbuster projects, but even she was surprised by the scale of Eternals. “It’s certainly the biggest thing I’ve ever done,” she says. “As somebody who’s directed, to watch the production try to manage it, it was a huge thing to take on.”

On Thena: The acrobatic Thena is one of the group’s elite warriors, and she can manifest weapons out of thin air. To prepare, Jolie undertook ballet training to capture her effortless grace, as well as teaching herself how to use various weapons — most of which were added in digitally in post-production. “It is one of the weirdest things to train for because you’re throwing things, grabbing things, breaking things in half,” she explains. “You feel a little nuts. You’re just throwing your hand out as if you’re thinking, ‘Is that a sword? Is that a spear? Is it a lasso? What am I doing?’ Then you get into it and it gets really fun, but it’s a puzzle.”

Why she took the role: “I just wanted to be a part of this family. I have a slightly unconventional family myself, so it felt familiar.”

The Giraffe: In all, the cast says they were surprised by how quickly they meshed, bonding both on screen and off. (At one point, Jolie threw a Halloween party for the cast and crew, dressing up herself as a giraffe.)

Angelina is such a mom, my God. Organizing a Halloween party and dressing like a giraffe? Mom move. I bet she passed out candy and complimented every costume. That EW piece was more comprehensive than I was expecting and I feel like I have a better grasp on the story, and how the Eternals function and what they’re supposed to be doing. It also sounds like Gemma Chan has the meatiest storyline, and she gets to be part of a love triangle between Richard Madden and Kit Harington. Hot??

Oh, and Marvel dropped the “final trailer” for The Eternals this morning. Marvel heard the fans’ complaints about “why didn’t the Eternals get involved with the Snap,” etc. So they cut a trailer half-way explaining it. Angelina looks amazing! So does Richard Madden. 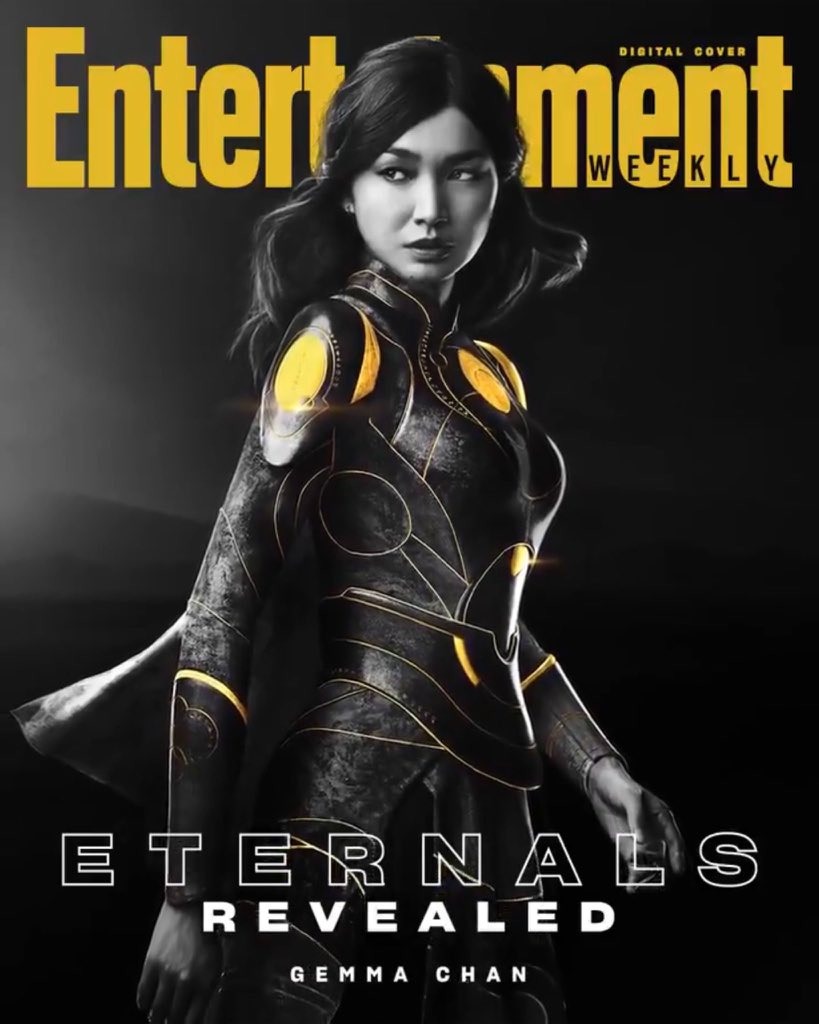 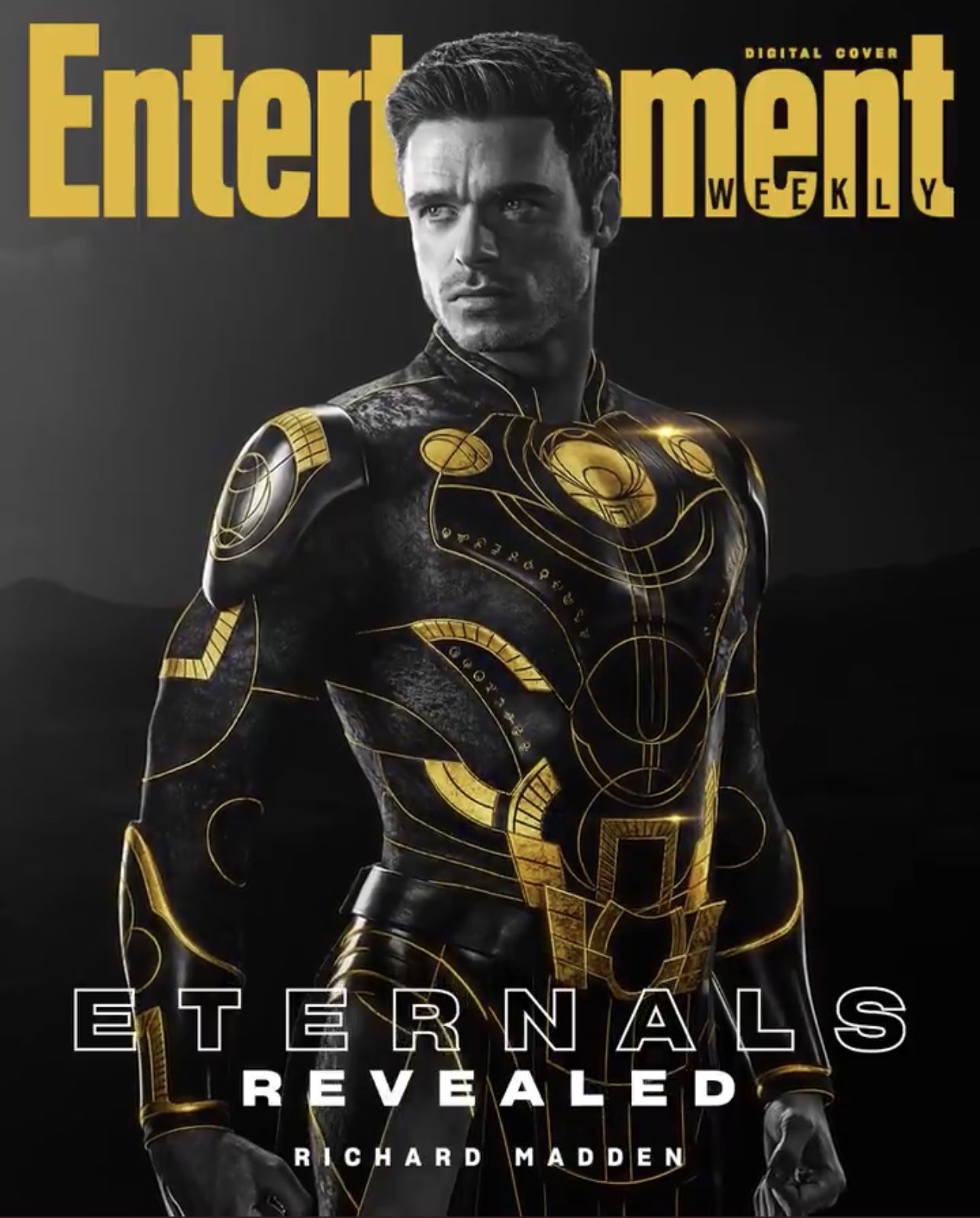