English comedian and actor Sean Lock has died from cancer at the age of 58, per The Guardian. Lock was perhaps famous for being a team captain on the British comedy panel show “8 Out of 10 Cats,” appearing on 105 episodes (per IMDb). Per the outlet, he also found success with appearances on shows such as “The Big Fat Quiz of the Year,” “QI,” “Have I Got News for You,” and “The Last Leg.”

Off the Kerb Productions told The Guardian that the comedian died at home with his family. “Sean was one of Britain’s finest comedians, his boundless creativity, lightning wit and the absurdist brilliance of his work marked him out as a unique voice in British comedy,” his agent said in a statement. “Sean was also a cherished husband and father to three children. Sean will be sorely missed by all that knew him,” which was evidenced by the reactions of his fellow comedians.

Per the BBC, comedian Bill Bailey said that Lock’s loss was “heartbreaking” and that he was a “true original, a wonderful comic.” Lock’s fellow captain on “8 Out of 10 Cats,” Joe Richardson, also tweeted about his death. “I idolised Sean as a comic long before I became a comedian myself and 10 years working alongside him didn’t diminish that in the least. An incredible comic brain and a truly unique voice,” Richardson tweeted, adding that Lock was an “undisputed, undefeated, carrot in a box champion.”

Sean Lock had a celebrated career as a comedian 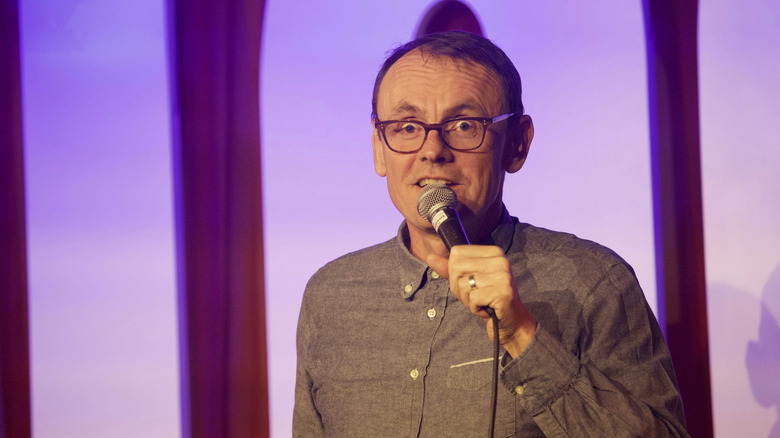 Per The Guardian, Sean Lock is from Surrey, and didn’t pursue comedy right away. In fact, he reportedly left school in the early 1980s and started working on “building sites,” during which he was overexposed to the sun — causing him to develop skin cancer, per the BBC. However, Lock’s health condition did not stop him from pursuing what he was so good at, which was making people laugh.

The English comedian’s take on comedy saw him being nominated for the Perrier comedy award for his show “No Flatley, I am the Lord of the Dance” at the Edinburgh Fringe in 2000, The Guardian noted. He’d also tour around the U.K, putting on shows. In addition to his career as a comic and actor, Lock was also a writer on various U.K. shows, per IMDb, including the popular “Never Mind The Buzzcocks,” as well as “15 Storeys High” and “TV Heaven, Telly Hell.”

According to The Guardian, Lock’s close friend and and comedian Lee Mack noted that “what made him appealing as a viewer was that he’d make you feel like “you were with your mate down the pub and he was making you laugh.'”