I’d never thought I’d say this, but Prince Harry and Bon Jovi are collaborating. The duo recently met in London to visit Abbey Road Studios — aka, the most famous recording studio in the world — to record a song for the Invictus Games. Since the team up seems to good to be true, fans are skeptical about whether Prince Harry will actually sing a song with Bon Jovi or not.

Prince Harry and Meghan Markle may have stepped down from royal duties, but they’re still busier than ever with their philanthropic work. In 2014, Prince Harry founded the Invictus Games, which is an international sporting event for injured, wounded, and sick armed forces members and veterans, and this year, the Games will take place in the Netherlands in May.

To commemorate the special occasion, Prince Harry invited Bon Jovi to record a song for the Games. On Friday, Feb. 28, the two stars met at Abbey Road Studios, which is where the Beatles famously recorded their albums. The guys seemed to enjoy their time there, as they even posed in front of the iconic Abbey Road Studios crosswalk. 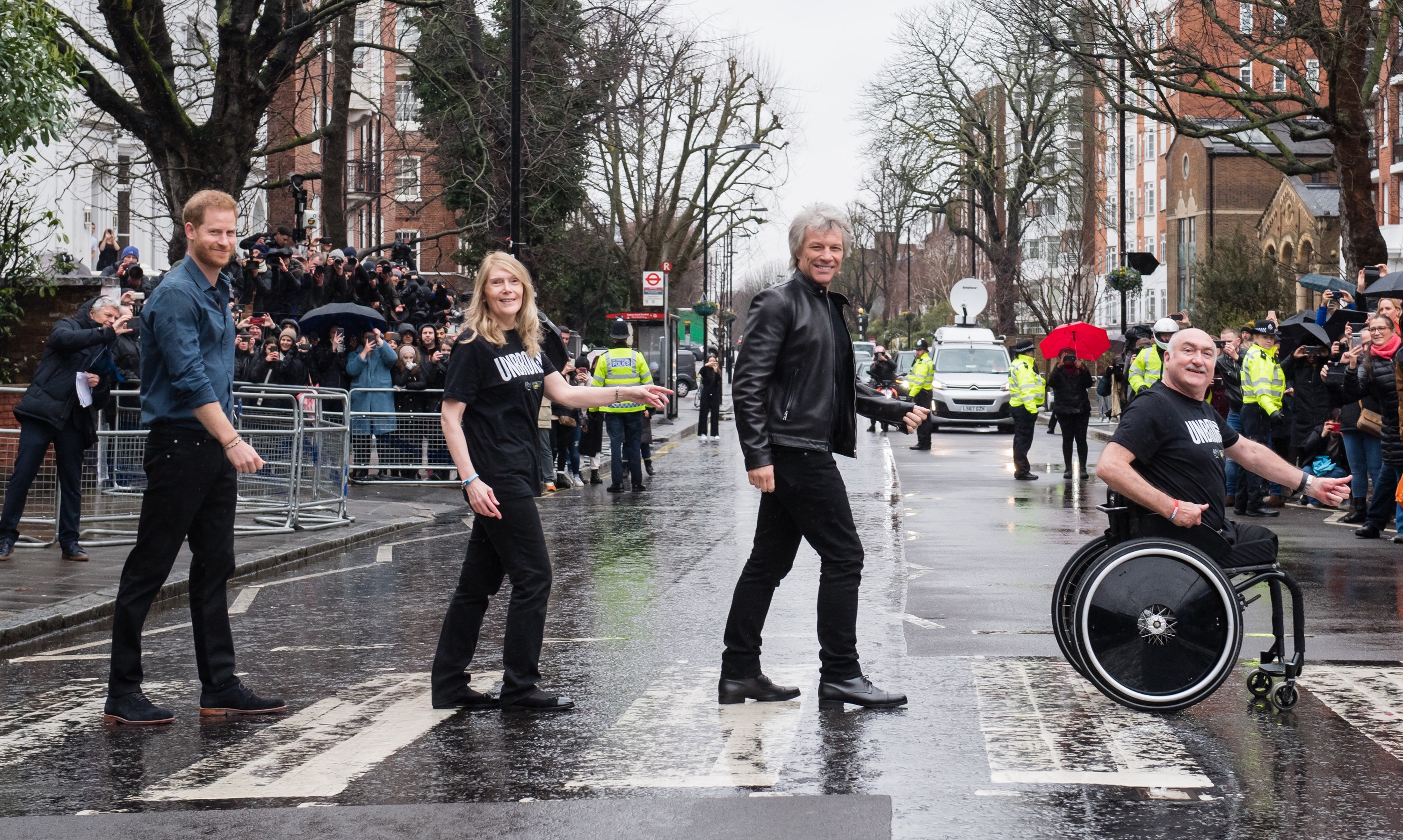 The pair recorded a version of Bon Jovi’s "Unbroken," which the New Jersey native released last year to honor veterans. According to PEOPLE, Bon Jovi joked his collaborator is the "Artist Formerly Known as Prince."

I said I’ll give it a shot…[Sound On ?] • Stay tuned for more to come later… #WeAreInvictus

Then, the Sussex IG account posted another video, but this time, only the Choir performed. As it turns out, Prince Harry didn’t actually sing with Bon Jovi. Instead, they gave the spotlight to the Choir.

"Although The Duke was unable to sing, leaving the vocals to the professionals, the special single that was recorded in Studio 2 where The Beatles recorded 11 out of their 13 albums, and will be released in March in support of the @WeAreInvictusGames," the account captioned the video.

Testing, testing?… • Recorded inside Abbey Road Studios, home to The Beatles and other music legends, The Duke of Sussex joins Jon Bon Jovi and the Invictus Games Choir for a special live session in aid of the Invictus Games Foundation. The song being played, called ‘Unbroken’, was created by Jon Bon Jovi to shine a spotlight on those veterans living with Post Traumatic Stress Injury (PTSI), to honour their service and acknowledge the strength of the Armed Forces community. The Duke and JBJ are both strong supporters of the military community, with The Duke founding the Invictus Games in 2014. The Invictus Games Choir, made up of wounded, injured and sick veterans and serving personnel from all services and different ranks of the UK Armed Forces, have come together to use the power of music to aid their recovery. Although The Duke was unable to sing, leaving the vocals to the professionals, the special single that was recorded in Studio 2 where The Beatles recorded 11 out of their 13 albums, and will be released in March in support of the @WeAreInvictusGames. Video © SussexRoyal

Prince Harry may have not sung on the track, but his involvement was truly appreciated.