Skip to content
HomeCelebrities'Younger': Molly Bernard Looks Back on Her Favorite Lauren Episodes

What initially started out as six lines in the pilot has blossomed into a scene-stealing and groundbreaking character for Molly Bernard, who has played Lauren, the always supportive, sex-positive millennial publicist, in all seven seasons of Younger.

With each new season, Lauren became increasingly more pivotal to the show. Not only has she helped Kelsey (Hilary Duff) and Liza (Sutton Foster) through their many personal and professional crises, she has also introduced audiences to the bad pancake theory, defined what it means to be a diva, uttered several iconic lines and became the first major openly pansexual character on TV, helping to expand the visibility and inclusion of the LGBTQ+ community onscreen.

Lauren “is a kooky, one-of-a-kind pansexual character who is not tokenized,” Bernard happily notes to ET, adding that “one of the great things about playing Lauren is that she is so effervescent and she’s very much herself.”

Acknowledging how quickly the writers on the series found Lauren’s voice and understood her as a performer, Bernard says “there was just some incredible chemistry among the writers and myself. And I think early on, they picked up on my vocal cadence. And I remember in season 2, when I saw that they were writing my isms in, I died. I was just like, ‘This is the most flattering thing.’”

Now that Younger is coming to an end, Bernard is looking back on her favorite episodes as Lauren and digging into why each of them are standout moments for both the character and her as an actor. 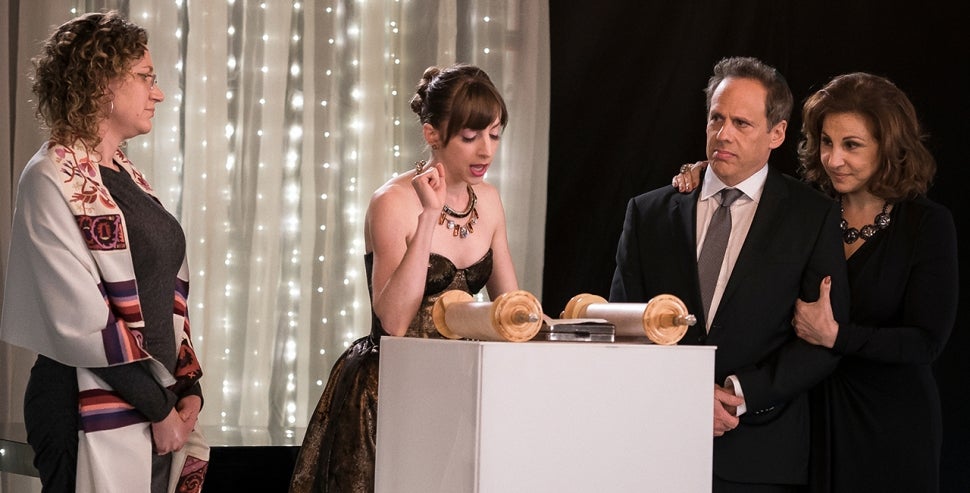 For Bernard, “Hot Mitzvah” marks a major turning point for her on Younger. After joining as a guest star in the beginning, “suddenly I realized, ‘Oh sh*t, I’m a cast member on the show. Like, I’m legit a part of the show,’” Bernard recalls. “And I remember reading that script and thinking, ‘Holy f**k, this is so cool.’”

In the episode, Lauren throws herself a “hot mitzvah” to make up for her disappointing bat mitzvah. During the party, she celebrates with Liza, Kelsey, Josh (Nico Tortorella) and Maggie (Debi Mazar) by putting MDMA into their drinks. It’s the first time audiences see that Lauren has a bit of a wild streak, but also a great sense of humor.

Bernard also notes that “she loves her family [played by Kathy Najimy and Josh Pais] and her family loves her,” which is important to the foundation of Lauren’s self-loving and self-celebratory nature. “Those parents love and celebrate her and they don’t care who she’s dating or who she’s with,” she adds.

It also doesn’t hurt Bernard became close friends with Najimy, who reappears in the final season. “She is an extraordinary person and we kind of fell in love that season,” Bernard shares. “We have maintained a really amazing friendship. And she’s still in my phone as ‘Mom.’” 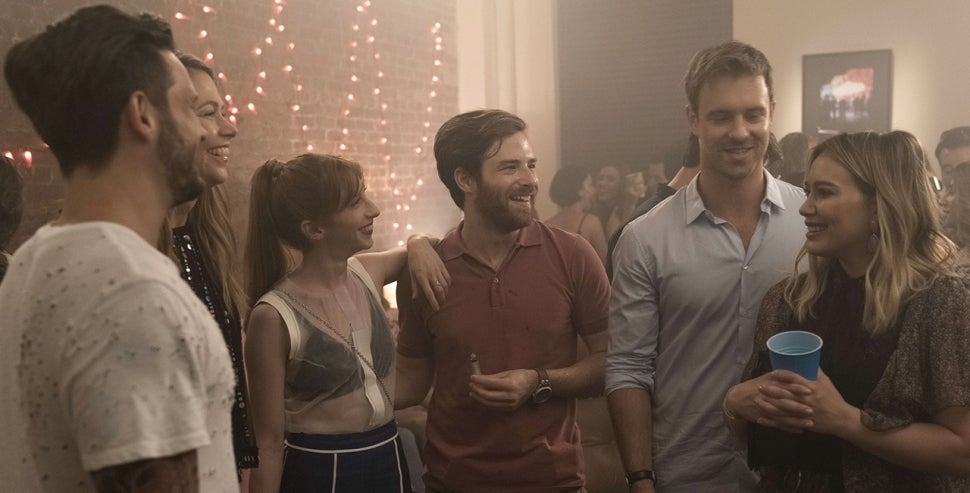 After Kelsey meets a great man named Lucas (Sean Kleier), Lauren tells her to go on a rebound before dating him while explaining how the bad pancake theory works. Later, at a party thrown by Lauren’s then-boyfriend, Matt (Ben Rappaport), and his medical buddies, Kelsey discovers Lucas lives on Roosevelt Island and Lauren encourages her to “tram slam him” because he turned out to be a bad pancake after all.

“I’m kind of a nerd, so, especially in the early days, I took everything Lauren did and said so seriously. I remember agonizing over exactly how I would say ‘tram slam him,’” recalls Bernard, who realized it needed to be said like a lieutenant giving an order. “I have to be ordering Kelsey. I can’t suggest it.”

“I forgot that Max came in so early,” Bernard notes. While his time on the series was brief, it was another opportunity to see “Lauren doing her own thing,” she says, recalling how Lauren jumped from Maggie to Max. “What stands out to me is she’s not taking her own advice about the bad pancake theory.” 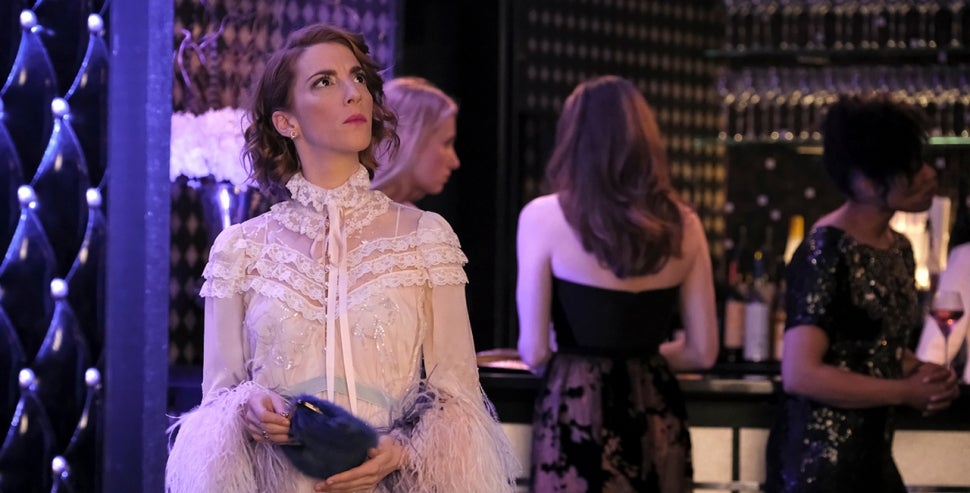 Lauren officially becomes Kelsey’s after securing her the maverick award at Glamour‘s Women of the Year honors. She also pursues a job at Empirical by flattering Diana (Miriam Shor), who just started dating Enzo (Chris Tardio). And it’s Lauren who realizes that he once starred in a pornographic film.

“I love this episode for so many reasons,” Bernard gushes, revealing that she and Shor were “chomping at the bit” to film their scenes together. “It was so much fun for us and we were so ready and thirsty to do it.”

Not only did this episode plant the seed for a special dynamic between Lauren and Diana that would play out for seasons to come (“It’s so foundational for what then happens later in the season and in the show”), but it also introduced Lauren’s most notable catchphrase: “Diva.”

“It’s definitely the first time that diva comes out to play and then diva’s here to stay,” Bernard quips. 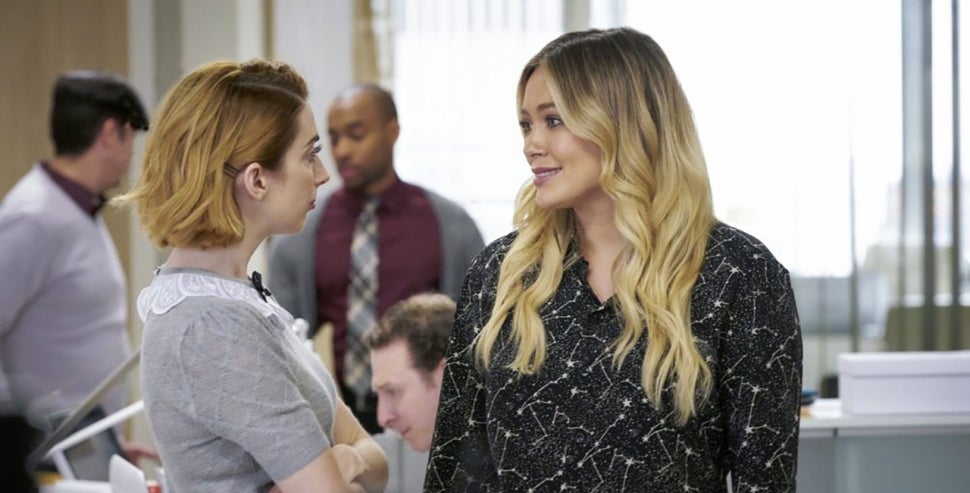 For most of the episode, Kelsey is still reeling from being asked to step down as publisher after a social media gaffe and Lauren, as always, is there to help prop her back up. Bernard notes how “Lauren is there every step of the way, rooting for her, pushing her, cheering Kelsey on.”

She adds, “Lauren is a champion. She’s a cheerleader. And you know, I wish I had a Lauren [in my life].”

It’s also an example of what Bernard thematically loves about Younger: “Our show celebrates tight, close multi-generational female friendships,” which is not something always seen on TV.

Later, when the girls throw Diana a surprise bachelorette party, Lauren takes control by taking Diana to Inkburg to get a tattoo. And if there’s one reason this episode stands out for Bernard, it’s because she delighted in having to get out of the giant stretch pink limo and yelling, “Get in the Hummer, b***h!”

“It was my favorite day on set,” she says, recalling that creator Darren Star and others were on set and being surprised that they let her “gutturally scream it. Like, I lowered my voice 10 octaves and went for a full mountain scream.”

Shot on location outside of Bryant Park in Manhattan, where they would film many of their outdoor scenes over the years, Bernard reveals that a friend of hers happened to be walking nearby when he heard her scream. Recognizing her voice, he came over to see what was happening and realized it was Younger.

“It was really fun. I love shooting in New York,” Bernard continues, explaining that the city really is a character on the show and moments like this exemplify why. “We’ve all seen drunk people on the streets, screaming, having fun with their friends at all hours of the night in New York, doing wild and crazy sh*t. It’s such a true New York moment.” 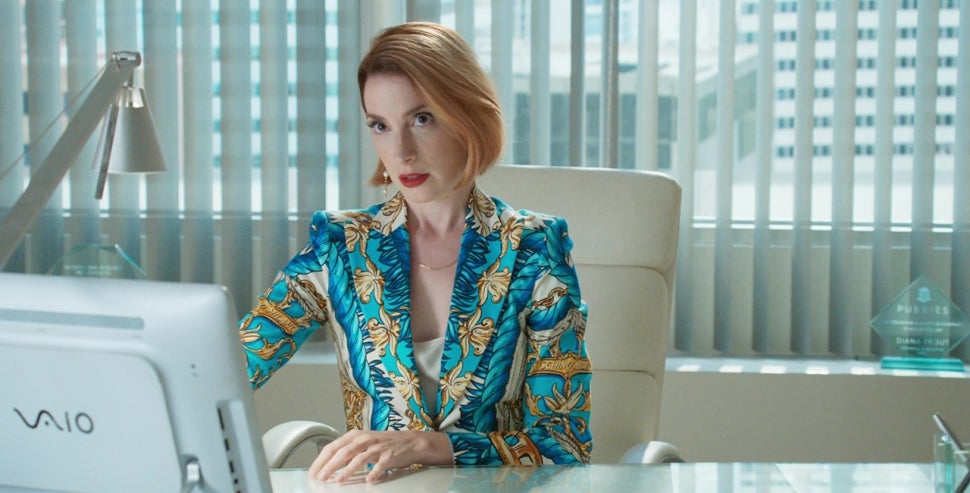 The final season opens with Lauren discovering that Charles had proposed to Liza during Diana’s wedding. And while Diana is on her honeymoon, Lauren is going to fill in for her as head of marketing at Empirical.

“We shot this season during the pandemic and so, sadly, Miriam didn’t join us,” Bernard says, explaining how her absence led Lauren to “babysit” Diana’s office. “I imagine there was some pivoting from what the season was going to be when Diana was going to be in it to whatever it had to change to… It is maybe a stroke of luck that the writers planted that seed [in season 5] because it worked out so well.”

Bernard adds, “There’s something so touching about how overly serious that Lauren takes her position,” especially considering how much love and adoration she has for Diana. “Lauren has hearts for eyes for Diana.”

From this episode on, the character is ultimately living out one of her deepest fantasies, stepping into Diana’s world, wearing her necklace and being a diva. “It’s amazing that her fantasy doesn’t include any romance, right? It’s just about being a diva and an actual like b***h boss,” Bernard continues, adding, “I love that that’s her M.O.”

Although it came with bittersweet feelings, for Bernard, it was a chance to pay “homage to the brilliant Miriam Shor in my Diana moments this season.”

Younger is now streaming on Paramount+.