We might not be getting Justice League 2, but Zack Snyder has revealed more of his plans for the two movies that would have completed his five-movie DC ‘trilogy.’

It’s well known now that after the events of Zack Snyder’s Justice League where the heroes defeated Steppenwolf, his master Darkseid would have made his way to Earth. His victory would have led to the Knightmare sequence we’ve seen in Man of Steel and the Snyder Cut.

However, the efforts of The Flash in manipulating time would have given Bruce Wayne a warning (the one we saw in Batman v Superman) that would have altered the course of events. The dark future would have been avoided, before one final battle between our heroes and Darkseid in the third Justice League movie.

That might sound familiar from the events of Avengers: Infinity War and Avengers: Endgame, but it’s worth remembering that Justice League was made in 2017 before both of them. (Had events played out differently, we might have said Endgame was like Justice League 3.)

There is actually one extra element to Snyder’s planned Justice League arc that we didn’t see coming though: Superman and Lois Lane’s son would have eventually gone on to become the new Batman.

Snyder confirmed to Vanity Fair that Lois Lane is actually pregnant in Zack Snyder’s Justice League, a storyline he had to cut in 2017 before he left the movie.

We briefly see a pregnancy test on her nightstand, but that’s the only hint in the movie to the future storyline. “It was going to be Lois and Superman’s son,” Snyder added. “He doesn’t have any powers, and then he was going to end up being the new Batman.”

But hang on, why would the SnyderVerse be in need of a new Batman? Well, Batman was going to make the sacrifice play in Justice League 2 to save Lois.

We knew that it was the death of Lois that saw Superman become susceptible to the Anti-Life Equation. As hinted at by Joker in the new Knightmare sequence in Zack Snyder’s Justice League, it’s actually all Batman’s fault that Lois died and he had promised Superman to keep her safe while Supes battled Darkseid. 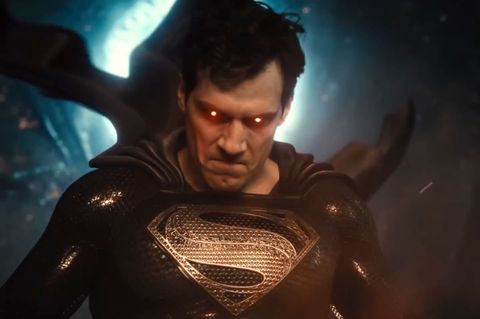 However, after Lex Luthor tells Darkseid that Superman’s weakness was Lois, Darkseid kills her after Batman hesitates and fails to protect her because they were in an argument. It all feeds into Snyder’s original plan for Bruce Wayne and Lois to have had a romantic relationship after Clark’s death.

This romantic subplot wasn’t added back into Snyder’s new version of the movie, but understandably, Batman would have still felt guilty for Lois’s death, which led to Superman turning evil and killing everybody. The Knightmare sequences have all been a tease of Superman hunting Batman down to avenge her death.

Once past Bruce realises what will happen if Lois dies, he chooses to sacrifice himself and alter the timeline, avoiding the dark future.

With the future saved and the heroes finally triumphant against Darkseid, we would have also seen a flashforward to Clark and Lois taking their now grown-up son to the Batcave to get him to take up the Batman mantle.

“Twenty years later, on the anniversary of [Batman’s] death, they take young Bruce Kent down to the Batcave and they say, ‘Your Uncle Bruce would’ve been proud if you did this’… something like that,” Snyder concluded.