What better way to spend Thanksgiving than rewatching some of the most memorable holiday TV episodes? Us Weekly has put together a list of eight must-watch episodes — from Marshall Erikson’s epic “Slapsgiving” song to Chandler Bing accidentally blurting out “I love you” to Monica while she’s wearing a turkey on her head. 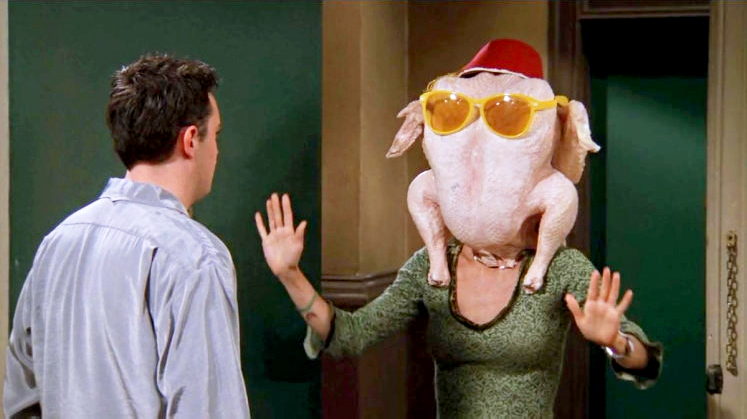 Friends: “The One With All the Thanksgivings”
Season 5, Episode 8
As the group recall past Thanksgivings, Monica reveals she overheard Chandler call her fat, leading to her epic transformation the following year. She was also responsible for cutting Chandler’s toe off. She tried to cheer him up by putting a turkey on her head — with sunglasses.

Turkey Time! Thanksgiving Movies to Watch Between Cooking and Feasting

Boy Meets World: “Turkey Day”
Season 4 Episode 10
The Hunters and the Matthews are forced to sit down together for a holiday meal, realizing that they have very little in common. Ultimately, the parents end up connecting thanks to Shawn and Cory reminding them they were raised to welcome everyone from all walks of life.

How I Met Your Mother: “Slapsgiving”
Season 3 Episode 9
While Lily tries to have the perfect Thanksgiving dinner, Barney is too worried about the third slap from Marshall — as he should be. Once Marshall finally does it after dinner, he then sings “You Just Got Slapped,” which is guaranteed to get stuck in your head.

Gossip Girl: “Blair Waldorf Must Pie”
Season 1 Episode 9
Through flashbacks, viewers see that a drunk Serena met Dan for the first time on Thanksgiving day when she nearly got hit by a cab. That’s a memorable holiday as Blair gets to celebrate with both her parents and it ends with a water fight with her best friend and then-boyfriend Nate.

Monica-Approved! How to Make Dishes From ‘Friends’ Thanksgiving Episodes

Buffy the Vampire Slayer: “Pangs”
Season 4 Episode 8
Buffy tries to have the perfect Thanksgiving, not knowing that Angel has secretly returned to Sunnydale and is basically following her or her own safety. Spike spends the episode tied to a chair and starving. Bonus: watch Angel’s “I Will Remember You” afterward — it’s a follow up to this episode, where Buffy visits him in Los Angeles on the spinoff. 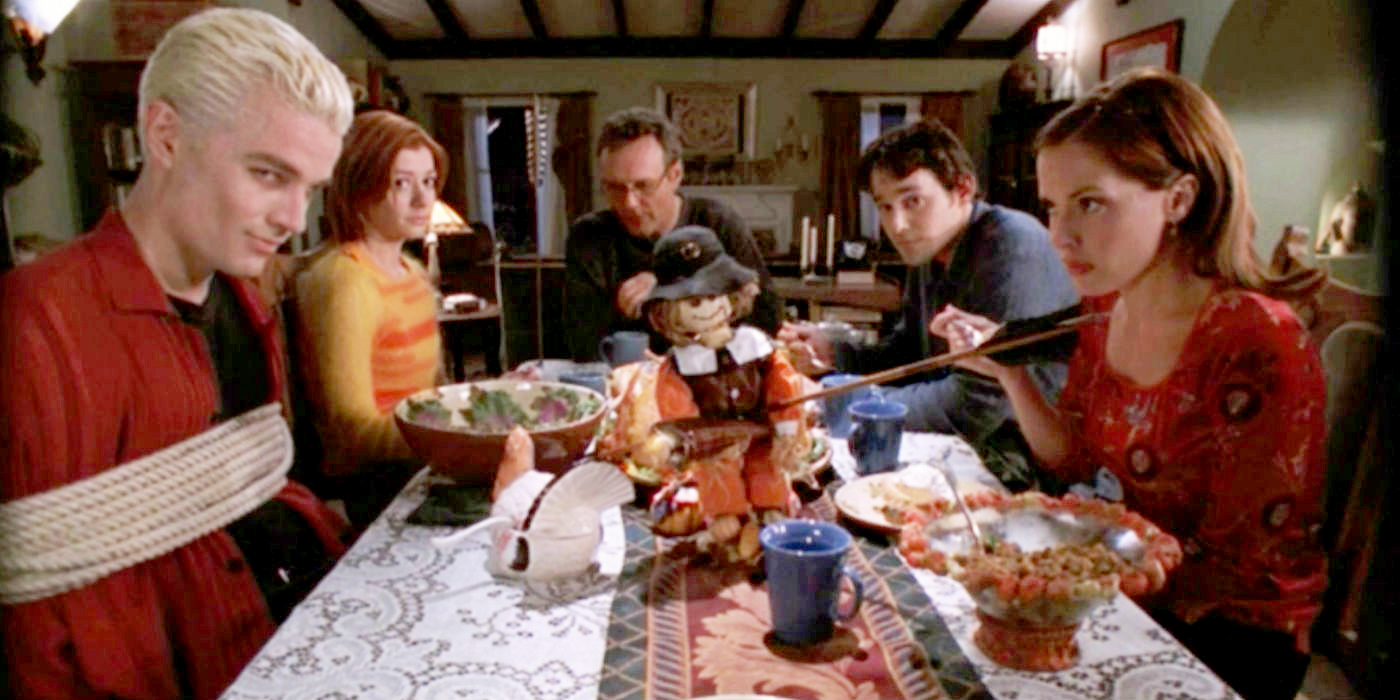 Friends: “The One With the Rumor”
Season 8, Episode 9
Who doesn’t want to see Brad Pitt on Friends? In this Thanksgiving episode, the formerly overweight Will (Pitt) joins for dinner and reveals that in high school, he and Ross were in “The I Hate Rachel Green Club”. They also made up a rumor about her being a hermaphrodite.

Glee: “Thanksgiving”
Season 4, Episode 8
Kurt and Rachel decide to stay in New York City instead of going home for the holiday and are joined by her on-again off-again beau, Brody. However, they also get a surprise visit from Sarah Jessica Parker’s Isabelle Wright and “have a Kiki.”

Dawson’s Creek: “Guess Who’s Coming to Dinner”
Season 3, Episode 8
This underrated episode is the only time the entire group of friends and their families all sit down around a table together. Things get awkward when Dawson crosses a line with Jen’s mom and Pacey and Jen decide to extend their friendship to add “benefits.” The episode ends with a nice bonfire — even though it would be freezing by a creek in November in Massachusetts.

Seinfeld: “The Mom and Pop Store”
Season 6 Episode 8
Remember when Bryan Cranston appeared on Seinfeld? This episode focused on George buying a used car he believes Jon Voight once owned. He later finds out the previous owner was not Angelina Jolie’s father but actually someone named John Voight — a friend of Dr. Whatley (Cranston).