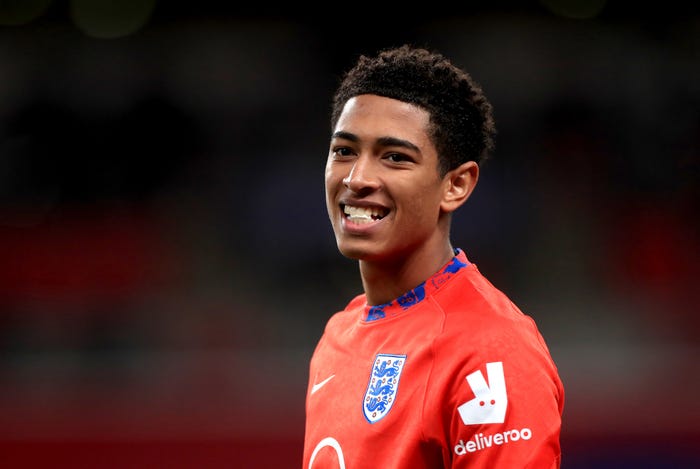 An English soccer player who made his debut for the national team is so young his manager had to make sure he had finished his homework before he played.

Jude Bellingham became England's third youngest ever player when he stepped out as a second-half substitute against Ireland on Thursday night aged just 17 years and 137 days.

Before he entered the field at Wembley, ITV pundit Sam Matterface told viewers that England boss Gareth Southgate had to ensure Bellingham had completed his schoolwork prior to the match.

Southgate confirmed after the 3-0 friendly win that that was indeed the case.

"It is a requirement for a young player of that age to do a certain amount of education every day," said Southgate. "So we have been helping him to fulfill that. That is standard practice for our younger teams as well."

Bellingham, who left Birmingham City for Borussia Dortmund in the summer, looked understandably nervous after coming on, but soon eased into the action, displaying some neat touches, which pleased Southgate.

"I thought he was a little nervous at the start," Southgate said.

"It was such a big occasion. One of the hardest things is to fit in with the rest of the group. You are training and working with players who, in Jude's case, he has only seen from afar because he is playing abroad as well.

"But you could see the longer he got in and the more touches he got the more confident he got. It was a special moment for him and his family. It was exactly what we hoped to be able to give him – some training with the team, experience of working with top professionals and then a small taste of the game which will be really good for his development."

Bellingham was delighted too, tweeting after: "What an amazing feeling! Too many people to thank from [Borussia Dortmund], England and [Birmingham City] in particular for getting me to this point.

"It's been some journey so far, can't wait to keep working hard and creating more moments like this."

Harry Maguire opened the scoring for England on the night in the 18th minute when he headed home from close range, before Jadon Sancho, Bellingham's Dortmund teammate, made it 2-0 with half an hour played.

Dominic Calvert Lewin then scored from the penalty spot just after the break to round off a comfortable win.

England next plays Belgium in the UEFA Nations League on Sunday.