Skip to content
HomeLifestyleA year on, is the NRL’s no-fault stand down rule working as intended?

Legal practitioners can come across as outright tossers for a million different reasons, including if they are too enthusiastic in parroting from the Idiots Guide to Lawyers' Latin. In this instance however, maybe it's appropriate to phrase things using the dead language; to try and illustrate just how ancient, and cardinal the principle of expeditiousness is, in dispensing justice. 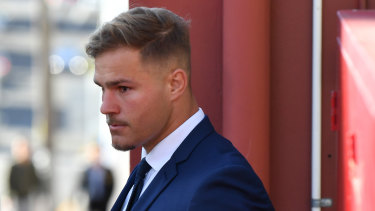 Jack de Belin’s rape trial has been hit by delays and is now set down for November.Credit:AAP

De Belin could stand trial in November; by some miracle, the markedly overstretched criminal court system could find an earlier date. The trial could be delayed, again. Who knows.

It's anything but uncommon in New South Wales for a charged person to have to wait two years before being afforded an opportunity to face their accusers. Even on charges which, if proven in court beyond a reasonable doubt, will change the course of many lives. Statistics published by the NSW Bureau of Crime Statistics and Research illustrate that, in the period from 2014 to 2018, the average wait time in District Court criminal cases, between arrest and trial, was greater than 700 days.

In the intervening period until his trial takes place, de Belin must enjoy the unmitigated presumption that he is an innocent person. That is a standard required in a society such as ours. But this column is not about that.

Instead, it's about the imperative of consistently and objectively asking the question of whether the NRL's no-fault stand down rule, and the application to de Belin's situation, is fair.

That's to be distinguished from the question of whether the rule is legal – in May 2019, the Federal Court of Australia decided that the NRL's new rules didn't amount to an unlawful restraint of trade, because the no-fault stand down, as applied in the circumstances, was reasonably necessary to protect the NRL's legitimate interests. Including important commercial interests – it's noted, the game’s governing body has reported a profit north of $30 million over revenue of half a billion, for the financial year ending October 31, 2019.

Further, the court determined that the NRL hadn't engaged in misleading or deceptive conduct or unconscionable conduct, each outlawed by the Australian Consumer Law; nor had the NRL tortiously interfered in the playing contract between de Belin and the Dragons, as a result of the imposition of its rule.

There isn't any element of measuring fairness per se, in analysing whether a restraint of trade is unlawful; whether a person has engaged in misleading or deceptive conduct, or even whether a person behaved in a way constituting unconscionable conduct. But a year on, isn't it at least reasonable to ask whether the NRL's no-fault stand down rule is, in hindsight, fair?

The NRL's new rules regime – contrary to the employment interests of players generally – was introduced with great haste in late February 2019. It's contended, in separate but presently unresolved proceedings commenced by the Rugby League Players' Association, that the NRL rules were enacted in the absence of necessary consultation with the RLPA, in turn contravening the collective bargaining agreement covering the RLPA, its members and the NRL.

The no-fault stand down rule is rooted in the premise that, once a player is charged with a serious criminal offence, the continued participation of that player in the NRL will damage the best image, interests and welfare of the professional game. The rule provides for a self-executing and immediate standing down of a player charged with a serious crime; however, a residual discretion exists to stand down a player, if a player is charged with any offence. A standing down of a player operates until all criminal proceedings are concluded.

One has to wonder whether the excision of de Belin from playing rugby league has actually rendered him any less omnipresent.

Twelve months ago, right before the NRL introduced its no-fault stand down provisions, I squarely advocated in this column that the balance of convenience no longer rested with allowing players to be included in professional rugby league pending the outcome of any serious criminal charges laid against them. I concluded that those players ought to be removed from participation, in the interim.

On that basis, you might think I'd be at least content, in that the no-fault stand down rule is consistent with what I'd petitioned for. But if you've drawn that conclusion, you're not on the money. What concerns me, much more, is fairness. Fairness to de Belin; fairness to his club; and fairness to the game and its players.

If de Belin's criminal trial doesn't start until November, by then he will have sat on the sidelines for two seasons. He will celebrate his 30th birthday at the commencement of the 2021 NRL season – if he's able to play, that's not a young age for a professional rugby league player.

De Belin's employment with the Dragons ends on October 31, 2020. He has no prospect whatsoever of any professional playing future after that until his criminal proceedings are decided one way or another. The Dragons won't try and re-contract him, and the inescapable truth is that the NRL wouldn't register the contract even if the club did the opposite.

If convicted, a new NRL contract for 2021 and beyond will be the least of de Belin's concerns. But regardless, the rivers of gold will run bone dry come Halloween. If he is adjudged not guilty, it's difficult to conclude other than to say that de Belin has no bargaining power in any future contract negotiations; two years on the sidelines will destroy his market value.

Yet the analysis of fairness doesn't end there. De Belin would've likely been the first player selected last year in the NSW State of Origin team, had he been available. Though St George Illawarra were afforded partial salary cap dispensation for the period of de Belin's forced layoff – to allow for the Dragons to replace him, in the elite squad – the compensation fell wickedly short of dollar-for-dollar equity. Add to that, the actual task for a club of replacing a player of de Belin's ilk on no notice, is an almost insurmountable task.

Moreover, one has to wonder whether the excision of de Belin from playing rugby league has actually rendered him any less omnipresent. Analyse the media's coverage of rugby league, and social media jibber-jabber. The player is not much less associated with the Dragons, the NRL or the game, simply because he is being paid to not turn up.

A year on from first suggesting that the NRL needed to fix its broken system, I agree with the judgment of the Federal Court, that the no-fault stand down rule is legal. I have a problem with it being enacted without due consultation; I have a real problem with retrospectively fitting the rule to smother conduct, alleged to have happened before the rule was even conceived.

On balance, the no-fault stand down rule is necessary, and on that basis reasonable, although it's only with the application of the rule to real situations that you can observe the actual consequences. The rule is inherently unfair in how affected clubs are compensated, with a view to putting them back in a position where they were, but for their player being removed from their service.

Other aspects of the application of the rule appear to have not been thought through – say a 25-year-old player, earning $1 million a year on a contract with a year to go, is forcibly stood down. Say that player then doesn't play for three years (and has no football income for the last two), until he succeeds in defending whatever he is charged with. He then wishes to resume playing.

How exactly is it planned that a player in that position will be reintegrated? Should he be compensated for monetary loss? Who pays?

Maybe that's no different to an athlete resuming after a long doping ban; but in the case of the doper, he or she was guilty of something and should rightly be penalised.