There’s no doubt who the villains are in Hunters (Amazon, all episodes available now) but it’s not always easy to spot the good guys. That’s because the vigilante gang on the trail of Nazis in 1977 America have a penchant for torturing the war criminals they unearth before killing them.

Sure, that blurs the line between monster and monstered a little, but they can rationalise it away as the price to be paid for settling old scores on behalf of six and a half million Holocaust victims. 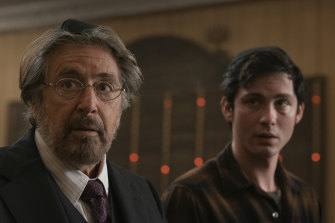 Al Pacino as Meyer Offerman and Logan Lerman as Jonah Heidelbaum in Hunters.Credit:Amazon

It’s heady stuff, morally and historically challenging, but with an odd dash of escapist revenge fantasy too.

With Al Pacino as chief Nazi hunter Meyer Offerman and Logan Lerman as his youngest recruit, Jonah Heidelbaum, Hunters can be mordantly, sadistically funny in its 1970s scenes. But in the wartime flashbacks it is relentlessly grim. How could it be otherwise?

It owes an enormous debt to the world of comic-book superheroes (many of whose creators were Jewish), to Tarantino’s ultra-violent Inglourious Basterds, and to the political horror-comedy mash-up of Jordan Peele (who serves as executive producer here). But the key to Hunters is the notion of memory – and the imperative of keeping it alive once victim-survivors can no longer bear witness.

“There are so many survivors who are not with us,” series creator David Weil, whose grandmother made it out of Auschwitz, has said. “The community has grown smaller and it was a love letter to my grandmother.”

Early in the movie-length first episode, Meyer gives Jonah a tour of his research facility, filled with classified files on Nazi doctors and scientists who were brought to America after the war by the US government (which really did happen), and interviews with survivors of their cruel experiments. The room is built in the shape of an upside-down ship. It is, Meyer explains, “an ark, to guard from extinction today’s endangered species – memory, truth.”

It could be unremittingly bleak, but Weil leavens his drama with plenty of humour, intrigue, cartoonish (and not-so-cartoonish) violence, and even a little romance. It ticks pretty much every diversity box – the hunters include an Asian-American Vietnam vet, a self-loving actor, an African-American woman, a blonde nun (played by Australian Kate Mulvany), and a cosily domestic Jewish code-breaking couple. They are pursued by FBI agent Millie Morris (Jerrika Hinton), who is black, Catholic and lesbian.

That puts everyone at odds with Travis (Greg Austin), a young American hitman whose devotion to the Nazi cause has nothing to do with being German and everything to do with the idea of racial purity.

The show is clearly allegorical, as much about American racism and xenophobia today as in the 1970s. “This show is really a question,” Weil has said. “It’s, ‘What do you do?’”

I’m presuming he doesn’t really think the answer is to find them and fillet them. But this kind of revenge fantasy does make for a more viscerally satisfying watch than legal proceedings at The Hague might. Such are the pleasures, and limitations, of the televisual medium. 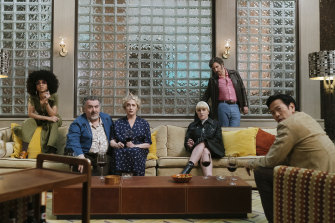 The gang’s all here: The Nazi hunters team ticks plenty of diversity boxes.Credit:Amazon

There has already been some pushback against the series for the liberties it takes with the facts. The Auschwitz Museum tweeted that inventing scenes such as the bloody chess match of episode one “is not only dangerous foolishness and caricature, it also welcomes future deniers. We honour the victims by preserving factual accuracy.”

Weil has, quite reasonably, replied that his series is not a documentary. It is, rather, a bold attempt to honour the victims without being bound by factual accuracy, so as to bring the past to life for a generation that might otherwise be inured to it.

It’s a risky game, fraught with contradictions. But it makes Hunters a fascinating watch.