Swimming's governing body FINA faces a new wave of athlete backlash if it doesn't modify the results from last year's World Championships in South Korea after Sun Yang's eight-year ban from the sport.

Already under heavy fire for allowing Sun to swim in the first place, FINA will now come under increasing pressure to void Sun's gold medals in the 200m and 400m freestyle and elevate the placegetters – one of which was 400m silver medal winner Mack Horton. 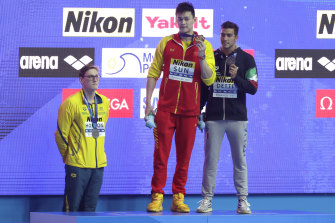 Mack Horton refuses to share the podium at last year’s world titles in South Korea with Sun Yang, who has since been banned for eight years.Credit:AP

Chinese hero Sun has been handed a hefty suspension that has ended a career that spanned two Olympic Games and three gold medals. He was a multiple world champion, with two of those coming from the highly dramatic 2019 instalment in Gwangju, South Korea.

He beat old sparring partner Horton in the 400m and was promoted to 200m gold after Lithuanian Danas Rapsys was disqualified for moving on the blocks.

In its ruling, CAS said it did not have reason to recommend Sun's medals be stripped in the wake of the fateful aborted drug test, in which a security guard smashed a vial of blood at his home in China in 2018.

But FINA has the power to alter the placings from the event, one which most competitors thought Sun had no business being at in the first place given his matter was pending with CAS after WADA appealed the initial ruling of a FINA doping panel, which took no action.

A lot of people would say 'Sun is a cheat, good on you Mack, you stood up for what you believe in' … If you get punished for doing that, you are being denied that opportunity to speak out.

Stars like South African Chad Le Close have urged a full review of Sun's medals since his original 2014 doping ban, in which he was suspended for just three months – served in secret – following a positive test for a banned stimulant.

Le Clos finished second in the 200m in Rio and wants his gold medal. While other swimmers have treaded carefully around the Sun Yang result, in public at least, Le Clos has no such concerns with speaking his mind.

"It's not only about me, it's about James Guy who got fourth in that race and whoever came ninth and 17th missed out on Olympic semi-finals and finals. It's a snowball effect," Le Clos told CNN.

"At the end of the day, you're killing generations of swimmers by not punishing these drug cheats. It's not for me to judge but of course I deserve that gold medal. I feel like they [FINA] should go back and have a look at some of the stuff that has happened."

He is hardly alone in that sentiment. Sources within the Australian and international swimming community say there is once again growing anger towards FINA, the beleaguered custodian of the sport that has been pounded from pillar to post over the past 12 months.

Athletes were in direct revolt ahead of the rebel International Swimming League after FINA threatened to blacklist them from Olympic competition if they competed. Swimmers like Adam Peaty and Cate Campbell were ready to openly defy that edict and the ISL went ahead has planned towards the end of last year.

But with FINA's overly friendly relations with Sun and Chinese swimming an open secret within the sport, the resentment and lack of faith has continued to fester and will only build should FINA resist altering the World Championship medals.

CAS said in its summary that because Sun was clean during tests at the World Championships meet and after the aborted test, they could not recommend the medals being stripped. FINA said it had 'noted' that judgement and 'also noted CAS's provisions with regard to the modification of competition results'.

Few believe FINA will have the courage to stand against China and deny Sun's medals but more non-action will only intensify the resentment many swimmers harbour to an organisation that openly covets Chinese support of the sport and and its economic clout.

Not everyone in Australian swimming believes the matter to be so clear cut. Former Olympic coach Laurie Lawrence said he could easily see why swimmers would demand change but unless there was explicit proof that Sun was doping during the event, it was difficult to act.

"I can see why they would be aggrieved. I'm on Mack's side but am loathe to point the finger say 'you were on drugs'. Because I don't know for certain," Lawrence said.

"But he was clean at the meet and clean after the initial test. And FINA said he could swim. So you can see that point of view. It's a fascinating one."