Former Victorian premier Ted Baillieu has urged the Liberal Party to introduce quotas to get more women elected to Parliament, as a growing chorus of Coalition leaders and MPs say the idea should be considered. 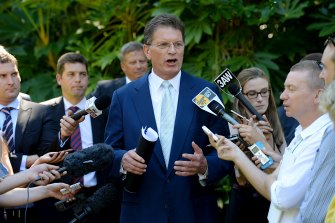 Ted Baillieu, pictured here at the end of his premiership in March 2013, has urged the Liberal Party to introduce quotas. Credit:Pat Scala

Mr Baillieu said he supported quotas and there were “plenty of different ways to introduce it. We shouldn’t be shy about exploring those options,” he said.

The Victorian Liberal Party’s top decision-making body will likely discuss the merits of introducing quotas for female candidates at its meeting on Thursday night, as part of a broader discussion about boosting the low proportion of women in its parliamentary ranks.

A senior Liberal source, who spoke on the condition of anonymity to freely discuss internal matters, said it was time for the Liberals to introduce quotas. “This has been going on forever and we just don’t seem to be preselecting them, and enough’s enough.”

Mr Baillieu said female candidates and MPs needed to be better supported, as he also called out the “bullies” in the party who had pushed successful women out of politics.

“I know there are a lot of women who I would regard as highly capable whose experience in the party was made so uncomfortable they walked away,” he said. “[Achieving gender equality] is also about calling out some of the shocking behaviour of former purported leaders in the party.”

The federal Coalition has been reeling after accusations of sexual assault emerged over the past month, including former staffer Brittany Higgins alleging she was raped by a male colleague in Parliament House.

In an emotional press conference on Tuesday, Mr Morrison said he was “very open” to the idea of introducing quotas for female MPs.

Mr O’Brien said female representation in the party was “not good enough” and the Liberals must “do better”. 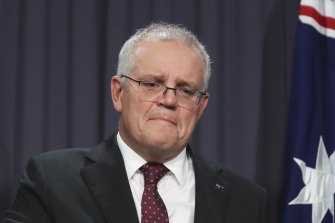 A visibly distressed Prime Minister Scott Morrison at a press conference in Canberra on Tuesday.Credit:Alex Ellinghausen

Former Victorian Liberal MP Andrea Coote, who headed the Women to Win group in 2016, said the Liberal Party needed to be “absolutely and utterly” debated in the current climate.

“The notion of quotas is a very emotive concept for the Liberal Party, but I feel it needs to be heartily debated and I’m really pleased to see the Prime Minister and Leader of the Opposition openly discussing it,” Ms Coote said.

In the federal arena, senior frontbenchers Marise Payne, Karen Andrews, Sussan Ley and Melissa Price along with a number of female MPs also said it was time to consider quotas.

NSW federal Liberal MP Trent Zimmerman said he wanted the party to adopt mandatory quotas of 50 per cent female candidates on Senate tickets then look to boost women in the lower house, but other male MPs on the government’s benches were reluctant to advocate for a formal policy, with many pointing out their grassroots members would not agree.

Labor introduced quotas for women running in winnable seats in the mid-1990s, which has led to almost half the federal caucus being female compared with just a quarter for the Coalition.

At a state level, Labor’s caucus is 48 per cent women, compared with the Liberals’ 22 per cent.

However, it would likely be more difficult for the Liberals to establish female quotas than the Labor Party. The ALP often picks its candidates in deals between factional operatives, meaning those officials can work to ensure enough females are picked. But Liberal candidates are generally are chosen in grassroots local preselections, where a field of candidates are voted on by local branch members.

Individual state branches of the Liberal Party have the power to implement changes such as quotas. The reform would likely need to be voted on at a meeting of the party’s state council, and would likely face stiff resistance from sections of the party.

Our Morning Edition newsletter is a curated guide to the most important and interesting stories, analysis and insights. Sign up here.