Bette Midler had a few choice words for Piers Morgan on Twitter Saturday after the British broadcaster came for Meghan Markle and Prince Harry’s royal titles over the weekend.

Morgan got riled up after the Duchess of Sussex joined the “When All Women Vote” virtual hangout on Thursday, where she spoke about voter suppression and the importance of the upcoming election in the U.S. “We all know what’s at stake this year,” she said.

The event was organized by the United States of Women, an advocacy group for gender equality, and When We All Vote, a nonpartisan initiative to encourage voting, and Meghan did not mention a political party or a candidate. But Morgan felt that the duchess got too political.

“The Queen must strip the Sussexes of their titles. They can’t remain as royals & spout off about foreign elections in such a brazenly partisan way,” he wrote.

Though the Duchess of Sussex didn’t respond to Morgan, Midler got the job done in just three little words: “Oh, fuck off.”

While there is no law barring members of the British royal family from voting and they support causes that could implicate government policy, senior members are expected to remain clear of electoral politics. The queen, in particular, must remain politically neutral.

Between that tradition and the attacks that Meghan has regularly faced in the British tabloid press, it’s no surprise that other U.K. commentators also leaped to criticize her. Dan Wooten, executive editor of The Sun, tweeted that the duchess was “now actively campaigning against Donald Trump.”

But Midler wasn’t the only one to come to her defense,

In response to Wooten, actor Jameela Jamil wrote that the royal family might be “more embarrassed” by Prince Andrew, “who was besties with a sex trafficker, than an American supporting women voting in her own country, and loosely referencing the importance of general democracy which is being threatened here currently.”

Andrew stepped back from royal duties in November of last year following a disastrous BBC Newsnight interview that discussed his ties to convicted sex offender Jeffrey Epstein. The prince has been accused of raping a minor who was allegedly trafficked by Epstein, although Andrew has repeatedly denied all allegations. 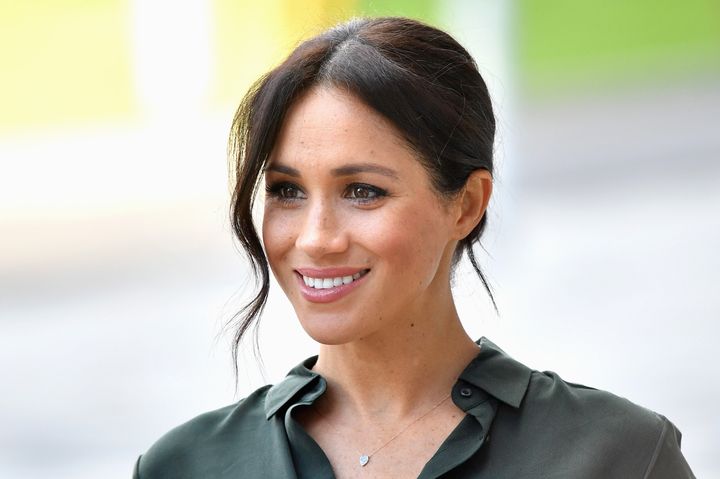 Before marrying into the royal family, the future Duchess of Sussex made her political views known. During an appearance on “The Nightly Show with Larry Wilmore” prior to the 2016 election, Meghan referred to Donald Trump as “divisive” and “misogynistic.”

Since stepping back as a senior working member of the royal family this year and settling into a new role beyond palace walls, Meghan has been actively encouraging Americans to exercise their right to vote.

“I also know that so many men and women have put their lives on the line for us to be heard,” she added. “And that opportunity, that fundamental right, is in our ability to exercise our right to vote and to make all of our voices heard.”

Subscribe to HuffPost’s Watching the Royals newsletter for all things Windsor (and beyond).