A prominent newspaper columnist. Multiple Indigenous leaders. Doctors, academics and scientists. All of them, in recent weeks and months, have been subject to subpoenas, investigations, or other more implicit efforts to silence the criticism they’ve leveled against the government of Brazilian President Jair Bolsonaro, the far-right leader who has ramped up his authoritarian tactics as his own political future has become increasingly uncertain.

For most of his presidency, Bolsonaro has enjoyed an iron grip on Brazil’s political narrative, able to whitewash potential scandals or change the discussion with a single tweet or rambling appearance on Facebook Live.

But that grip is loosening: A congressional investigation into his denialist and conspiratorial handling of the COVID-19 pandemic, which has killed 450,000 Brazilians, now dominates morning newspapers and nightly newscasts. Rates of deforestation in the Amazon and attacks on Indigenous tribes, issues that have turned Bolsonaro into a global pariah, have attracted increasingly negative attention at home, especially now that Bolsonaro’s environmental minister is under investigation over illegal timber exports to the United States. And the reemergence of Luiz Inácio Lula da Silva, a popular former president who is positioning himself to pursue the presidency again next year, has largely solidified Brazil’s leftist opposition, creating a countervailing force around a leader skilled at capturing the attention of the Brazilian public and the world. 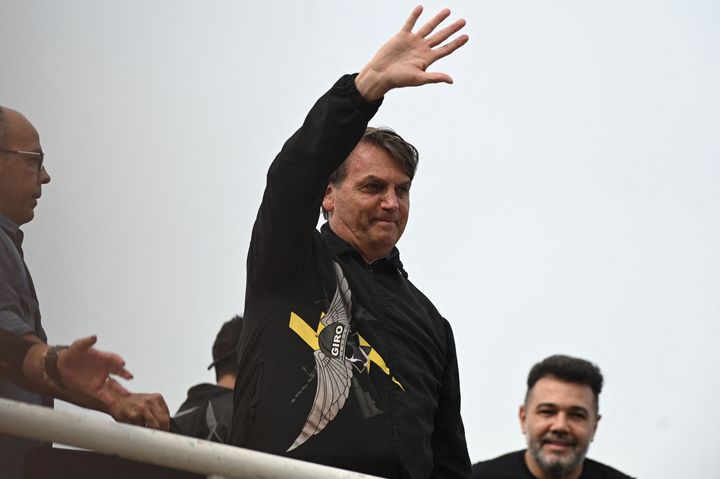 With his approval ratings at the lowest levels of his presidency and early polls projecting a resounding defeat to da Silva next year, Bolsonaro and his allies have responded the only way they know how: by trying to silence criticism instead of dealing with the problems that generate it.

“We’re seeing the same thing we’ve been seeing from early on, which is this mix of bullying and intimidating civil society, opposition leaders, and academics,” said Oliver Stuenkel, a professor at the Getulio Vargas Foundation in São Paulo. “It’s becoming more intense right now, but it’s conversely related to and caused by his growing difficulties politically. He’s cornered. That leads him to make these absurd sort of attacks. He’s making purposefully outrageous claims in an attempt to wrest back control.”

As COVID-19 worsened in Brazil again this spring, briefly turning the country into the epicenter of the pandemic, scientists and doctors across the country challenged Bolsonaro’s refusal to endorse social distancing, mask wearing, or other practices meant to slow the spread of the virus. Many who did so also faced threats of retribution, especially when they held positions at public hospitals or universities: Earlier this year, officials from the Bolsonaro government threatened to fire Pedro Hallal ― an epidemiologist at the Federal University of Pelotas who has advised Brazil’s health ministry and coordinates the country’s COVID-19 research project ― after he called Bolsonaro “despicable” during an online panel, Science Magazine reported.

In March, police in Brazil used a law passed under its former military dictatorship to detain protesters who called Bolsonaro’s pandemic response “genocidal.” In early May, Brazil’s Indigenous affairs agency, FUNAI, opened an investigation into Sônia Guajajara and Almir Suruí, two prominent Indigenous leaders who have been critical of the government’s handling of the pandemic and its impact on Indigenous populations. Both received subpoenas from the federal police over accusations that they had defamed the president and the government by criticizing his approach to the pandemic. In a documentary posted online, Reuters reported, Guajajara accused Bolsonaro of genocide for leaving Indigenous tribes unprotected as the virus spread across Brazil. 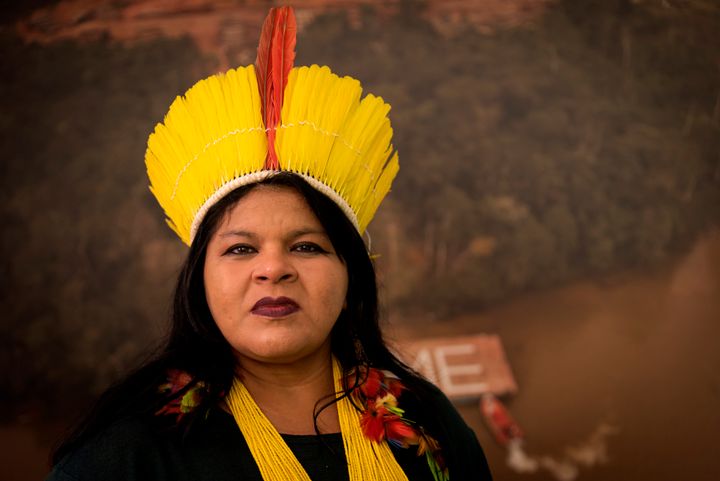 A Brazilian court blocked police from continuing the investigation into the two Indigenous leaders. But even before the subpoenas, Bolsonaro had overseen “a total setback to the constitutional guarantees of Indigenous peoples and the environment,” Joênia Wapichana, the only Indigenous member of Brazil’s National Congress, told HuffPost. Now, “in addition to being cruel, he denies and tries to criminalize voices critical of his government.”

The further weaponizing of FUNAI ― an agency specifically charged with advocating for and protecting Brazil’s tribal peoples ― into a tool to legally target Indigenous leaders is another significant rupture for the country’s democratic institutions. The agency has been largely co-opted, Indigenous leaders say, by Bolsonaro allies and appointees who, like the president, want to target tribes and their lands.

Illegal land invasions from miners and loggers have increased, along with attacks on Indigenous people, who have suffered from the dueling crises of deforestation and the pandemic. At least 1,000 Indigenous people have died from COVID-19, according to a recent study, which also suggested that the government has undercounted the number of deaths.

“The difficulty we are having is not only financial difficulty, but political difficulty,” said Caetano Scannavino, the head of Projeto Saúde e Alegria (The Health and Happiness Project), an Amazon-based nonprofit that works closely with many Indigenous tribes and environmental organizations. “We are treated like an enemy. We are trying to help, so help us help them, not the opposite. We are not fighting against the government, we are fighting against the virus.”

Indigenous killings during disputes with land raiders have also spiked. Twice this month, wildcat gold miners have fired on members of the Yanomami Tribe in northern Brazil; at least two children drowned trying to escape one attack, and five other people were injured, according to tribal leaders, who say the Bolsonaro government’s refusal to enforce laws against illegal mining and logging operations has fueled the attacks. After the Brazilian Supreme Court ordered the government to increase its protection of the Yanomami and other tribes in the region, wildcat miners on Thursday attacked police and raided a village of the Munduruku tribe.

‘A Clear Attempt’ To Intimidate The Press

Bolsonaro has attacked and belittled journalists and columnists who have questioned him throughout his presidency. His allies have adopted his practices and absorbed the belief that they can use the tools of government to go after their critics. This week, Brazil’s Senate police opened an investigation into Celso Rocha de Barros, a prominent political columnist at the Folha de S.Paulo newspaper, after he wrote a column accusing Bolsonaro allies in the Senate of trying to cover up the government’s pandemic misdeeds during the congressional inquiry.

The column, which called for Bolsonaro’s imprisonment for overseeing a “mass murder,” blasted Bolsonaro for pushing the anti-malarial drug chloroquine as a COVID-19 treatment, despite clinical trials that have shown it does not prevent illness or death from the virus. Rocha de Barros alleged that the two Bolsonaro allies who ultimately requested the probe into him were “trying to disrupt the investigation” into Bolsonaro’s handling of the pandemic “by lying about medicine.”

Rocha de Barros said that he will not cooperate with the investigation, which he regards as illegitimate and outside the scope of the Senate Police’s responsibilities.

“It is a clear attempt at intimidation,” Rocha de Barros told HuffPost. “I do not think the Bolsonaristas have much hope that these investigations will proceed, or that they will obtain decisions favorable to them in court. The important thing is to create inconveniences for their targets in order to discourage other people who could also criticize them.”

“Classic authoritarianism,” he said. “This shows how the Bolsonaristas, who have always called themselves critics of the politically correct, do not accept being called anything they dislike. They are snowflakes.”

It’s not a coincidence that Bolsonaro is lashing out over COVID-19 and deforestation simultaneously: He sees denial of the pandemic and rampant environmental exploitation, especially of protected Indigenous lands, as crucial to the resurgence of the Brazilian economy, and thus to his presidency. But Brazilians are souring on him more than they have at any point during his time in office, and it seems clear that  Bolsonaro feels more vulnerable now than ever before.

The congressional inquiry has already elicited damning details about Bolsonaro’s handling of the pandemic. During a hearing this month, a Pfizer executive testified that the company initially offered to supply Brazil with vaccine doses last September, but didn’t receive a response from Bolsonaro’s government for more than two months. Later offers were similarly ignored. (The Pfizer vaccine is now available in Brazil, which has fully vaccinated roughly 15% of its adult population. Bolsonaro has repeatedly mocked the need for COVID-19 vaccines.) 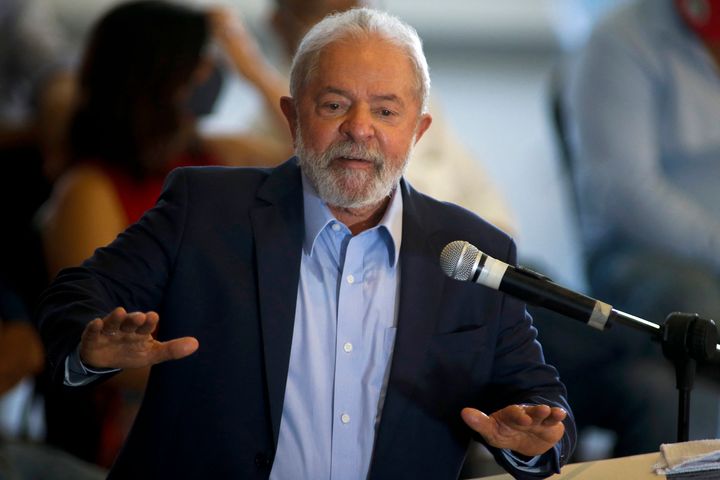 The inquiry is not likely to lead to Bolsonaro’s impeachment, even if more than half of Brazilians now favor that outcome. But his handling of the pandemic may ultimately doom his presidency. In 2018, Bolsonaro won the election by weaponizing corruption and anger at the Brazilian establishment, and especially at da Silva and the Workers’ Party, which had governed Brazil for most of the prior two decades. Now Bolsonaro himself is the symbol of a failing government, and da Silva (who is eligible to run for office again after his corruption conviction — which was the result of judicial impropriety — was annulled) is already attempting to capitalize on the fact that anti-Bolsonarismo has, for now, become a stronger political force than anti-Workers’ Party sentiment was three years ago.

Eighteen months before the election, da Silva has not formally launched his campaign. But he’s clearly positioning himself to run with a heavy focus on Bolsonaro’s handling of the pandemic and the economic crisis it has created. He has promised to get Brazil, once a global leader in vaccinations and response to infectious diseases, healthy and growing again. And da Silva, who oversaw Brazil’s rapturous economic growth during the 2000s, looks like a credible, stable alternative even to many Brazilians who once swore they’d never again vote for the PT, as the Workers’ Party is known.

Last week, former President Fernando Henrique Cardoso, an icon of Brazil’s elite center-right who defeated da Silva in two presidential elections in the 1990s, met with his former adversary and said that he would support da Silva over Bolsonaro in a head-to-head matchup. So, it seems, would a majority of the country: da Silva led Bolsonaro, 55% to 32%, in a recent poll conducted by the country’s most reputable pollster. (The poll asked about a potential one-on-one match-up; Brazilian presidential elections require a two-person run-off if no single candidate wins a clear majority in the first round.)

Bolsonaro still has time to shift the narrative. His government has already resumed the coronavirus-related relief payments that helped millions of Brazilians avoid poverty early in the pandemic and bolstered Bolsonaro’s support during another self-inflicted political crisis last year. But Bolsonaro is, at his core, the authoritarian he looks like in his most desperate moments, and he never manages to keep another costume on for very long.

Bolsonaro’s most prominent targets aren’t likely to suffer from his and his allies’ heavy-handed efforts. Courts blocked the investigation into Guajajara and other Indigenous leaders, and tossed out the subpoenas. Rocha de Barros is one of Brazil’s best-known columnists and has the backing of its largest newspaper. Many of Bolsonaro’s loudest critics are insulated enough by major institutions and organizations ― universities, newspapers, or, in Guajarara’s case, the Articulation of Indigenous Peoples of Brazil, the major tribal rights organization she leads ― that can shield them from official blowback.

But there has already been a chilling effect on those who lack that sort of institutional support, or who just want to avoid the headaches that come along with criticizing the president publicly.

Many academics, NGOs and newspapers in Brazil rely heavily on government funding, increasing the pressure to stay silent if only to avoid problems. Bolsonaro’s supporters, already prone to attack anyone who criticizes the president, are likely to follow his lead ― and push their leader and his allies toward even more aggressive responses to future criticism.

“It sends a message to everybody else that you don’t want to get into trouble, and it’s really not worth it,” Stuenkel said. “So unless you’re super committed, you just don’t want to mess with these guys.”