Skip to content
HomeLifestyle‘Built on gut-feel’: Smooth FM’s rise from the ashes to ratings juggernaut

Eight years ago, Nova's secondary radio station was on its knees. After dwelling in the ratings doldrums for years and undergoing two failed rebrands in two years, Paul Jackson was handed the poisoned chalice of launching Smooth FM.

Mr Jackson, Nova Entertainment's chief programming and marketing officer, knew the station had to start strongly. He gave himself six months knowing if he failed, he might be hunting for another job. 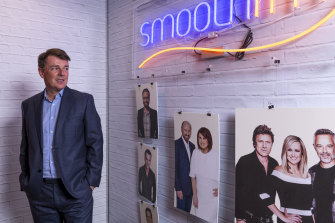 "We knew if we didn't start well we'd probably never get it off the ground. There was a lot of cynicism about the business trying its third attempt to launch something," Mr Jackson said.

Eight years on, Smooth FM has risen from the ashes to become a ratings juggernaut, finishing 2019 as the top FM station in Sydney and second in Melbourne.

Smooth FM beat its Sydney competitors KIIS and WSFM in all eight ratings periods to finish the year with a 9.3 per cent audience share, 0.5 percentage points ahead of KIIS. Despite a strong start to 2019 in Melbourne the audience dropped to 8.5 per cent, behind Gold 104.3 which recorded 11 per cent in the December survey.

"More than research, the brand the station has been built on gut-feel," Mr Jackson said.

The competition were playing pop or rock, and they had boisterous hosts who talked a lot. Smooth FM would swim against the stream.

"The way we frame it as 'more music and less talk' is it's the radio station you can tune into and there's not going to be a lot of clutter," he said. "We're very clean, easy listening. Hopefully a station that makes people feel good too," he said.

'Change the music to fit the mood'

For a radio executive, Mr Jackson takes a very hands-on approach and doesn't hesitate to change the mix of music if it doesn't feel right.

"We self-analyse and we're pretty self-critical," he said.

"If it's a really hot day we didn't expect or a really rainy day we really do play everything quite emotively and change the music to fit the mood."

Despite a relaxed and affable demeanour, Mr Jackson has one unbreakable commandment: never speak while music is playing. The poster on his office wall – "Don't talk over music" – reinforces the station's unofficial motto.

"That's been something we've been stringent on from day one," Jackson said.

"We've got to see it from the listener's perspective. If they're having a tough day at work or picking the kids up from school, they don't want the presenter talking all over the music. We want people singing along and getting lost in the moment."

The hunter vs the hunted

After helping build a station from scratch, Mr Jackson now finds himself trying to defend a lead.

"It's a totally different mentality," he said.

Resisting the temptation to look over his shoulder, Mr Jackson instead focuses on what he can control.

"There are other radio stations playing more of the music that only Smooth played for a number of years," he said. "We just have to run our own race."

One of Smooth FM's clear strategies in running its own race has been celebrity endorsement, with global superstars Michael Buble and Robbie Williams among those to front advertising campaigns.

"We've never paid for anyone to come and endorse the station or work with us," he said. "They do it because they want airplay on the radio stations, it's very powerful for them."

Ahead of the first period of radio ratings for 2020 being released next week, Mr Jackson admits to being "always nervous" the morning the results are announced.

"I have this philosophy of let's not react to any one survey, even when it's so good you go, 'Can that be right?' Try break the year down into two halves, you average the first four [surveys] and average the last four, take a broader view," he said.

On that metric, Smooth FM won the first half of 2019 in Sydney, finishing 1.2 per cent ahead of KIIS before the gap closed in the second half. In Melbourne Smooth FM narrowly won the first half before Gold 104.3 opened up a 2.3 per cent gap, setting the station an early challenge for 2020.