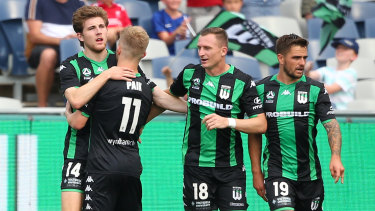 But the 25-year-old Burgess made a mockery of that barren record on Sunday, finding the net three times in a golden 18-minute spell late in the opening half.

The victory saw United snap a four-game winless streak as they breathed new life into their finals push.

The A-League's newest club now sit seventh on the table, with seven games to play.

In contrast, hapless Central Coast remain rooted to the bottom of the ladder following a seventh successive loss. 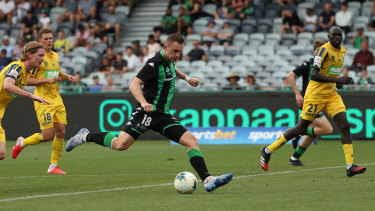 Talisman Besart Berisha opened the scoring for United on Sunday in the eighth minute, powering a header past Mariners keeper Mark Birighitti after Connor Pain was fouled on the edge of the box.

Central Coast were briefly back on level terms in the 20th minute when Chris Harold successfully converted from the penalty spot after a handball by Western's recent Japanese signing Tomoki Imai.

Then up stepped Burgess, whose three goals came in the 25th, 30th and 43rd minutes.

Remarkably that wasn't the end of the first-half action, with Gianni Stensness scoring for the Mariners with a spectacular bicycle kick in the 45th minute to reduce the deficit to two goals.

The second half was a more pedestrian affair, although the home team still managed to find the back of the net on two more occasions.

Andrew Durante bundled the ball across the line in the 60th minute to restore Western's three-goal advantage.

Birighitti then produced two of the best saves of the game to deny the impressive Pain in the final half hour.

Berisha rounded out the scoring in the 87th minute, tapping home a cross from Josh Risdon.

United’s last home match of the season in Geelong was watched by a very small crowd.

Their two remaining home fixtures will be at Mars Stadium in Ballarat.