Public health experts are recommending that the US resume using Johnson & Johnson’s coronavirus vaccine, after immunizations were halted to investigate reports of rare blood clots.

A Centers for Disease Control and Prevention advisory committee voted 10 to 4, with 1 abstention, on Friday that use of the shot should resume. US health regulators will warn people who get the vaccine that there’s a risk of unusual clots in women under 50.

Overall, the panel said the benefits of the shot, in terms of preventing hospitalizations and deaths from COVID-19, far outweigh the risks.

A handful of experts said they thought the panel should have issued an explicit warning to women under 50 about the risk of clots.

Committee member Dr. Sarah Long said she voted no because she thinks her panel should provide more guidance to younger women.

Officials have identified 15 cases of the unusual blood clots

“This is an age group that is most at risk that is getting this vaccine predominantly to save other people’s lives and morbidity, not their own,” Long said. “And I think we have a responsibility to be certain that they know this.”

Use of the vaccine had been paused since April 13, amid reports that several people who’d gotten the shot had developed a rare type of blood clot, along with a drop in their platelet levels. Platelets are the part of your blood that binds together to form clots.

Officials have identified 15 cases of these clots, called cerebral venous sinus thrombosis (CVST), in women who’d received the shot. Three of the women have died. (A 16th case, in a young man, was observed during J&J’s clinical trials).

“These events are rare, but they are serious,” committee chair Dr. Jose Romero said at the end of the meeting.

“It is our responsibility as clinicians to make sure that women understand this risk, and when possible that they have an alternative [Moderna, Pfizer] at the same site that you’re administering the [J&J] vaccine.”

The risk of clotting is highest for women between the ages of 30 and 39, according to data presented to the committee Friday.

“The last 11 days, to me, have been reassuring, because we haven’t identified hundreds of cases across the US,” said Dr. Grace Lee, an associate chief medical officer at Stanford Children’s Hospital, who serves on the committee.

The FDA will change the label on J&J’s shot

Public confidence in the vaccine has dropped significantly in the week and a half since this pause began. Just 19% of Americans would now be willing to get the shot, according to data presented to the advisory group Friday. 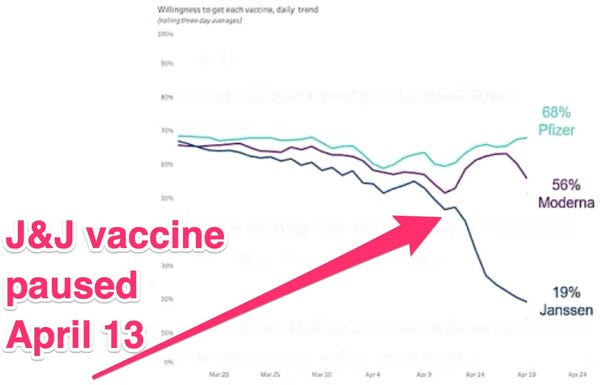 J&J representatives said the company’s shot should be reintroduced because it holds up well against virus variants that are spreading in the US. The vaccine is also given as a single shot and can be stored in standard refrigerators. That makes it easier to give to people who are homebound, homeless, scared of needles, or incarcerated.

Before the federal pause, 6% of Americans overall said they’d prefer to get a one dose coronavirus vaccine, a statistic that held true regardless of a person’s age, sex, or income. 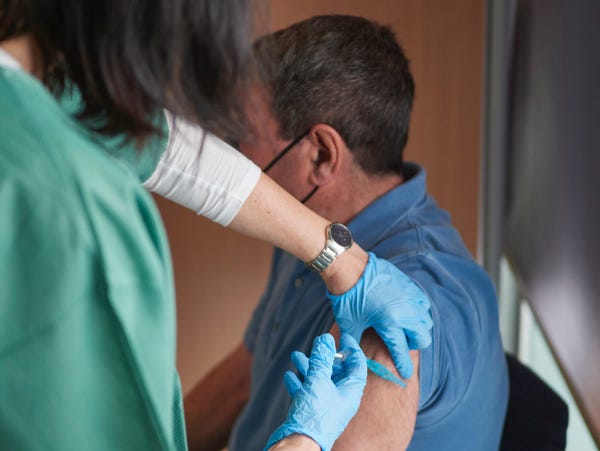 These unusual cases of CVST clots in patients with low platelets have not been meaningfully connected in any way to the messenger RNA vaccines from Pfizer and Moderna. J&J’s shot is also significantly cheaper than both Pfizer and Moderna’s mRNA vaccines, making it a critical tool in fighting back the virus worldwide.

Without J&J’s vaccine, the CDC’s Dr. Sara Oliver estimated it would take 14 days longer to immunize all adults in the US.

The FDA will need to update the emergency use authorization for J&J’s vaccine with the new warning information. That’s expected to be done early next week, according to Amanda Cohn, the executive secretary for the CDC’s vaccine advisory committee.