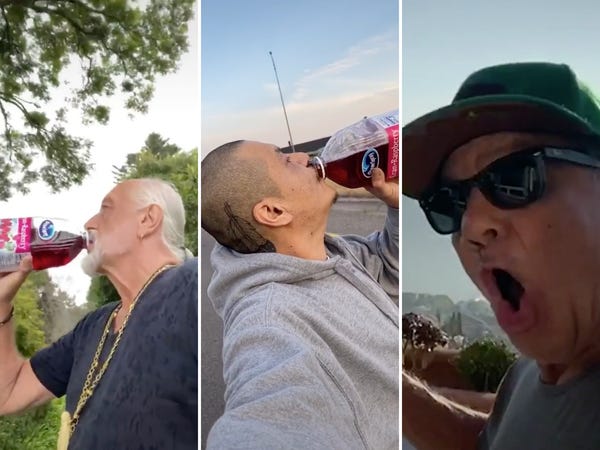 Nathan Apodaca, a.k.a. @420doggface208, has taken over the internet with a video featuring his longboard, a jug of Cran-Raspberry juice, Fleetwood Mac's "Dreams," and some of the best vibes on TikTok.

Apodaca, 37, originally posted his "Dreams" video on September 25, and in the weeks since it's blown up on both TikTok and Twitter. The creator, who was a star on TikTok even before the video went viral, told Insider that he filmed it after his car broke down on the way to work.

The video has brought new attention to the 1977 "Dreams," landing it a spot back on the Billboard Hot 100 singles chart at No. 21, and also attracted the attention of Ocean Spray, who gifted Apodaca with a new truck.

Here are some of the other notable celebrity recreations of the instant classic.

Later, Fleetwood joined a BBC broadcast with Apodaca, telling him, "We owe you… it's so joyous and fun."

Tom Hayes, the CEO of Ocean Spray, also recreated Apodaca's video in what seems to be the first and only post on his TikTok account. Ocean Spray also gifted Apodaca with a new truck.

In the caption of his video, Hayes wrote, "Did we just become best friends? @mickfleetwood @420doggface208"

Dr. Phil, whose TikTok presence has in the past led to him begging people to stop calling him "Daddy," also recreated the video. In his version, captioned simply with "Afternoon vibe," he cruised around in a golf cart while sipping on Cran-Raspberry Ocean Spray.

Renowned comedy duo Cheech & Chong also recreated the video on TikTok, captioning it, "Sorry we're late to the party @420doggface208, you forgot to pick us up in that new truck man!"

Late-night host Jimmy Fallon recreated Apodaca's video on TikTok, rolling down a hallway with a face shield on, later dumping the cranberry juice on the shield itself.

While not quite a conventional celebrity, Montana Lt. Governor Mike Cooney recreated the video and posted it on Twitter with the caption "montana dreams." According to The New York Times, Apodaca regularly makes trips to Montana to visit his daughters.