MasterChef Australia judge Jock Zonfrillo has revealed his simple creamy pasta recipe using just five ingredients – and why you should always rest your dish before serving.

Cacio e Pepe is a Roman pasta dish which translates to ‘cheese and pepper’. 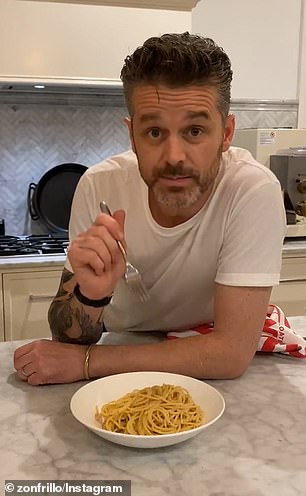 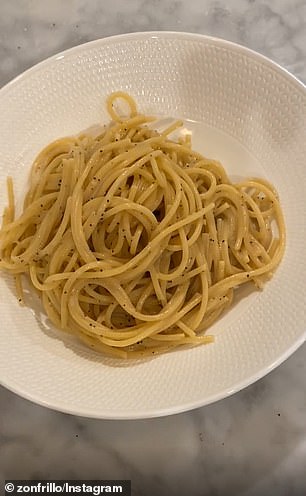 In a large pot of boiling salted water, Jock added a teaspoon of plain flour to create a ‘starch’.

‘When pasta comes in a packet, dried, it doesn’t have any residue flour. Now when I make pasta through a pasta machine, it has a little bit of flour and when you cook the pasta, the water becomes starchy because of the excess flour,’ Jock explained.

‘Because there’s no flour on your [dried, store-bought] pasta, you’re going to struggle to get starchy water. My nonna used to get a teaspoon of plain flour into a bowl and whisked with a little bit of cold water. Then pour it into the pasta water.

‘What that does is emulate what it would of been like to have fresh pasta inside the water. Now the water is actually starchy.’

Once the starch has been created, he cooked the dried spaghetti until al dente.

He said you should always reserve some of the ‘starchy’ pasta water because it adds a ‘velvety texture’ to the sauce.

Meanwhile, he grated the pecorino cheese into a bowl and set aside.

‘It’s really important you’re using pecorino cheese, should be made from sheep’s milk. It can’t be parmesan,’ he explained, adding ‘the finer you can grate the cheese, the better.’

In a tall beaker, he poured 300 grams of boiling pasta water before using a stick blender to blend the liquid. Jock then added two handfuls of cheese to the water, and continued blending. Next, he added the rest of the cheese into the water.

‘What that is going to do is melt the cheese and emulsify into the pasta water and that’s going to give you the perfect, smooth, delicious Cacio e Pepe sauce,’ he said.

After draining the spaghetti, Jock poured a quarter of a cup of reserved pasta water back into a pot over low heat.

Jock then transferred the peppery spaghetti into a large bowl before adding in the cheese mixture he prepared earlier.

‘The reason I like to blitz the sauce is because it’s an easy way to do it and it gives you a silky, soft, smooth pasta,’ he said.

Once the pasta is coated in the sauce, Jock said you need to let it ‘rest’ for a minute to prevent the dish from going ‘clumpy’ and ‘starchy’.

‘For me, this is easily one of the best pasta dishes in the world,’ he added. 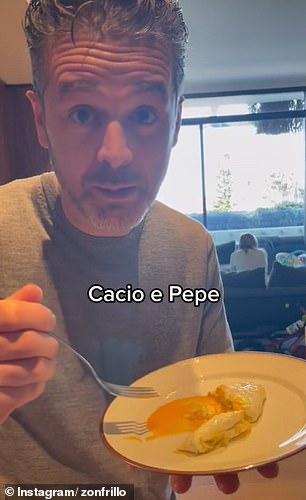 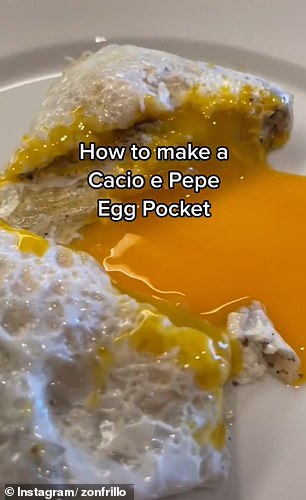 In a heated non-stick pan with oil, pour egg white in, moving the pan around to create an omelette.

Place yolk carefully in the centre, then sprinkle a generous amount of pecorino cheese over the top, followed by black pepper.

To create a square-shaped pocket, fold the sides into the centre.

To make the egg pocket, the top chef separated the egg white from the yolk.

In a heated non-stick pan with oil, Jock poured the egg white in, moving the pan around to create an omelette.

He placed the yolk carefully in the centre, then sprinkled a generous amount of pecorino cheese over the top, followed by black pepper.

To create a square-shaped pocket, he folded the sides into the centre.

After plating up the dish, Jock used a knife to cut through the egg white to show the runny yolk.

His video has since been viewed more than 165,000 times on Instagram and 11,000 times on TikTok, with many saying they couldn’t wait to make it at home.

‘Oh my god yum… I’m making this in the morning,’ one wrote.

‘Simple yet delicious, I’ll definitely try it today,’ another said, while one added: ‘That looks so delicious. I’m so trying this for tea tonight not breakfast. Thank you, that is all, goodbye.’