‘And a new meme is born!’ Twitter goes wild over video that captures Celine Dion’s VERY bemused reaction when a fan starts serenading her in New York

A video of a fan singing to Celine Dion as she watches out from the back of an SUV has gone viral — all due to Celine’s very relatable reaction.

Freida Solomon, a 22-year-old singer from Short Hills, New Jersey, spotted the 51-year-old icon outside the Four Seasons in New York City this week, and couldn’t resists the opportunity to show off her own vocal chops for the star.

But while Celine was actually quite complimentary to Freida — and even gave her a quick fist bump — a clip of the serenade that seems to show her unimpressed reaction has gone viral. 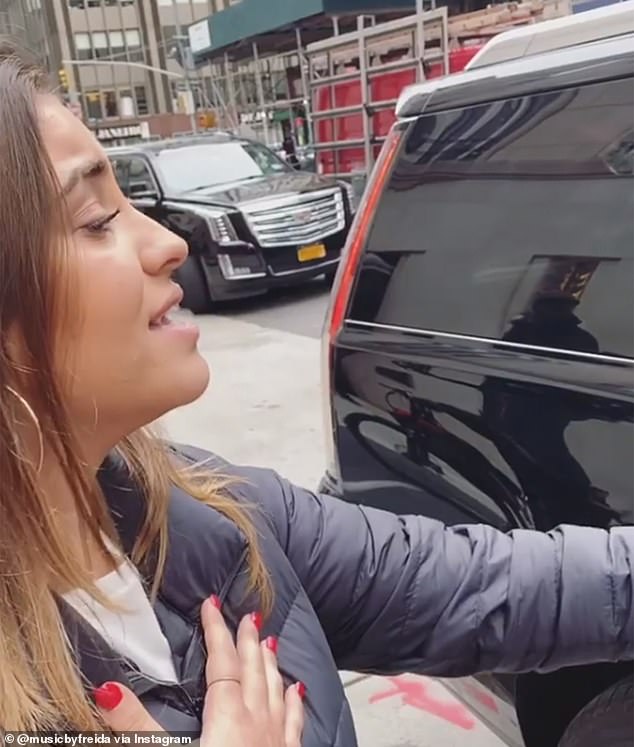 Her moment: A fan named Freida Solomon sang to Celine Dion outside the Four Seasons in New York City this week 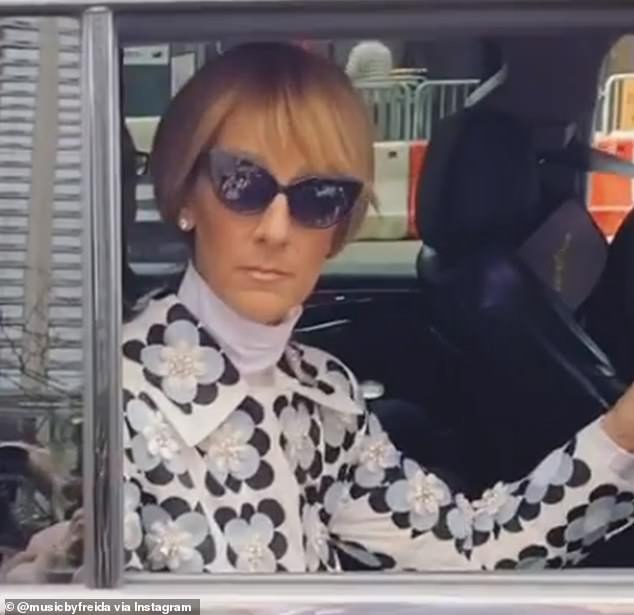 Music: Celine, sitting in the back of an SUV, watched her through the window and listened 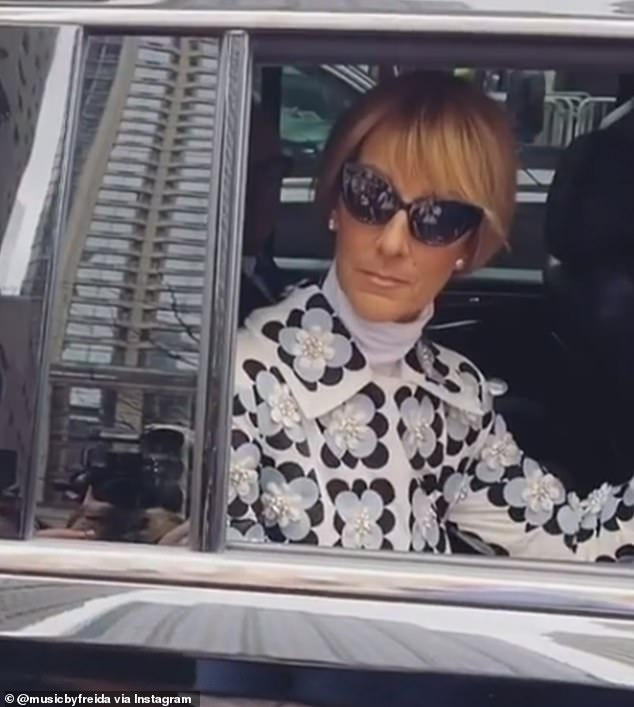 Not a fan? A shortened version of the clip seems to show Celine reacting with a bemused or unimpressed expression

In the viral clip, Freida is mid-song, belting out a chorus from Celine’s 2002 single I Surrender.

The camera then pans to Celine, who sits in the back seat of a black SUV wearing a stylish 8 Moncler Richard Quinn floral coat and dark sunglasses.

As the clip spread around social media, viewers zeroed in on the reaction, interpreting it to mean that Celine was totally unimpressed and wanted to get away.

‘Celine Dion is an absolute mood here,’ wrote another, while a third tweeted: ‘The strength in her jaw to keep that straight face is WOW.’

One quipped, ‘and a new meme is born’ — and sure enough, dozens of people have shared screenshots of Celine’s face in that particular moment, writing things like ‘judging you in French.’

Even Ariana Grande shared the image, but without comment.

The video in its entirety, though, tells a different story. When Freida started to sing, Celine gives her all of her attention, listening intently to the song.

A few seconds into the serenade, Celine’s car starts to pull away — and the Grammy winner tells her driver ‘don’t go’ so she can continue to listen.

When Freida finished, Celine cracked a smile, and even put her arm out the window to give her a fist bump.

‘Thank you so much for that,’ Celine tells her sweetly, still smiling. ‘You’re beautiful. Thank you for singing to me.’

‘You’ve sung for me my whole life,’ Freida replies. 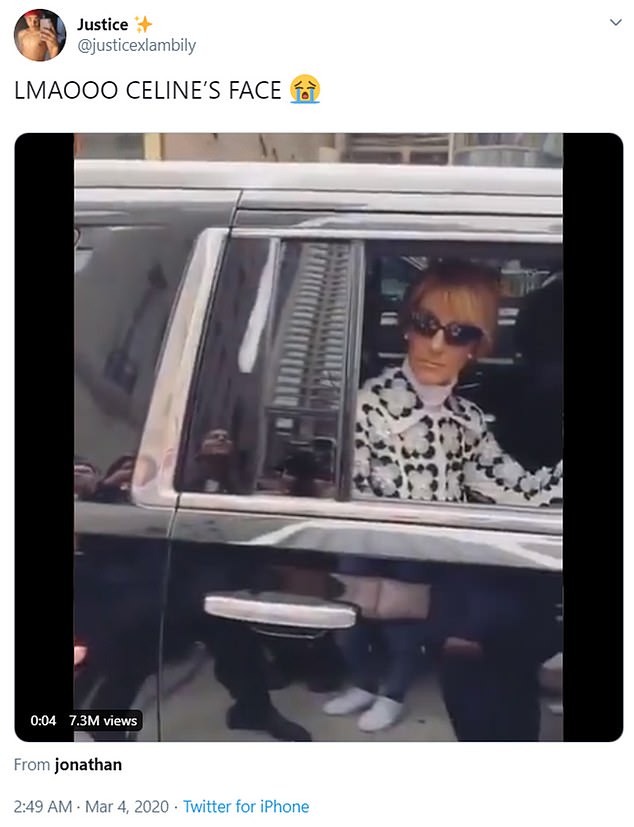 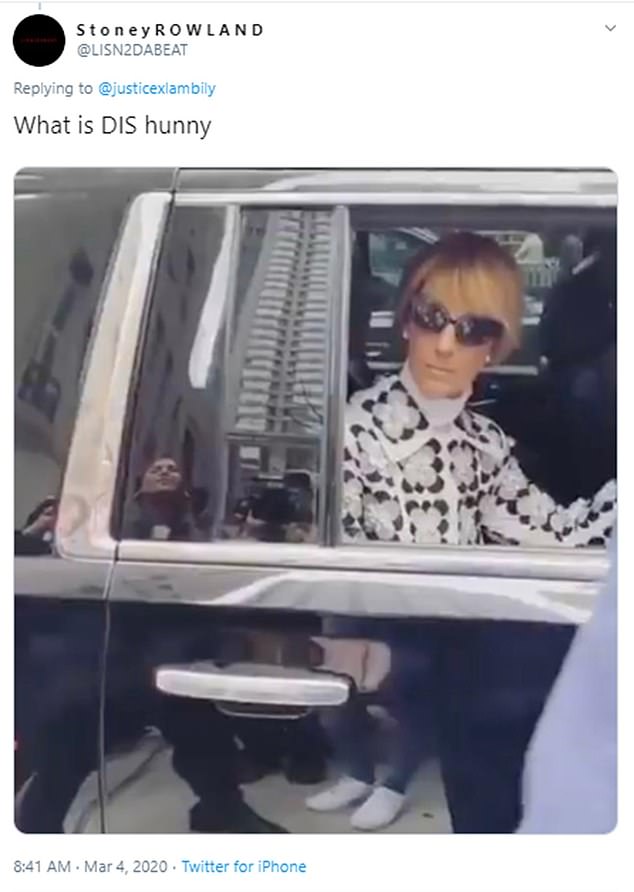 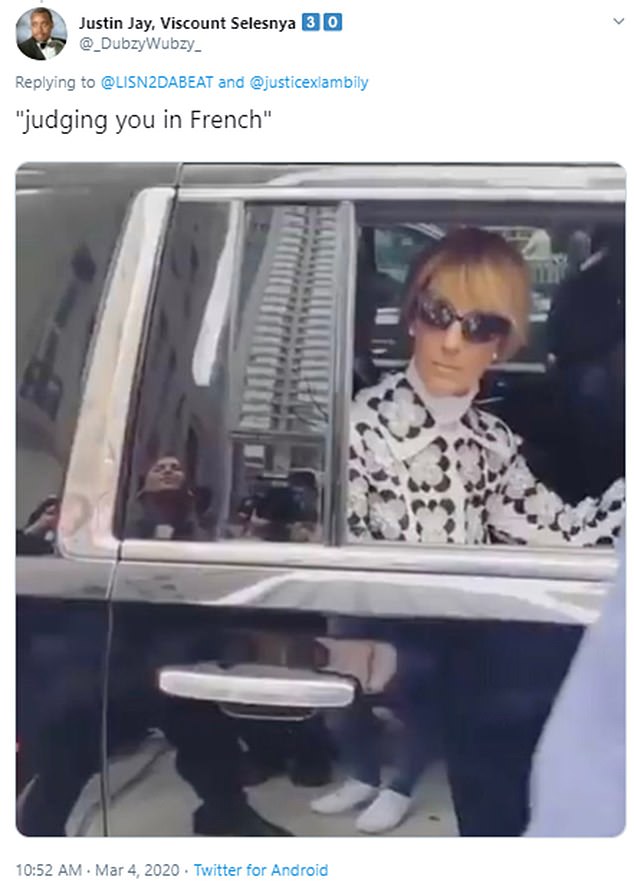 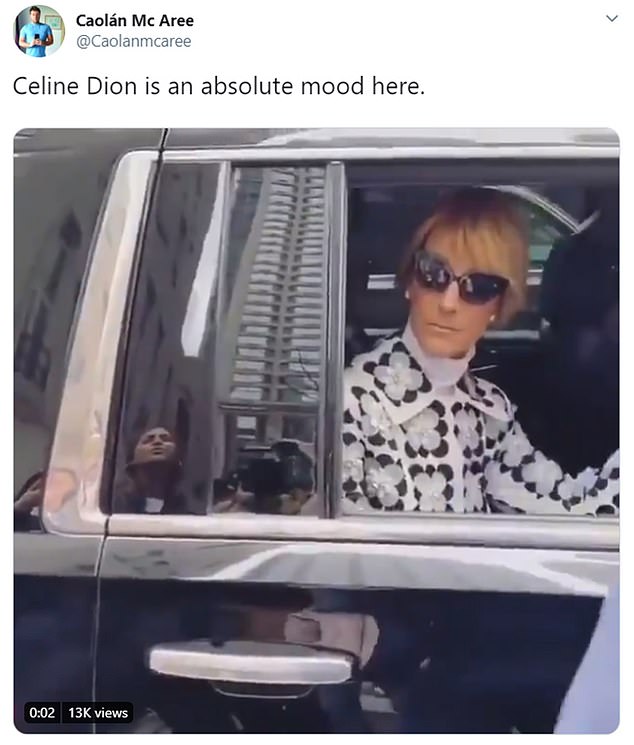 Viral: As the clip spread around social media, viewers zeroed in on the reaction, interpreting it to mean that Celine was totally unimpressed and wanted to get away

Celine continues to share sweet words before waving and blowing a kiss as she pulls away.

Freida is thrilled by the interaction.

‘[I’ve] been singing her songs and listening to her since I was little, so this was too good of an opportunity to pass up,’ Freida told E! News. ‘And she was so gracious, I couldn’t resist… I’ve loved her and her music for years and had to stay to see her.

‘When she went into her car and closed the door, I knew I lost my chance at speaking to her. But then I asked her to roll down her window, which she did. I told her how I grew up listening to her sing with Andrea Bocelli and how she’s been an icon in my life and out of nowhere I started singing “I Surrender,” one of her most famous songs.

‘I can’t believe I got a moment like that in my life,’ she added.

Though Freida has faced some mockery for the shortened version of the clip, she is excited by the reaction and grateful for the positive feedback. 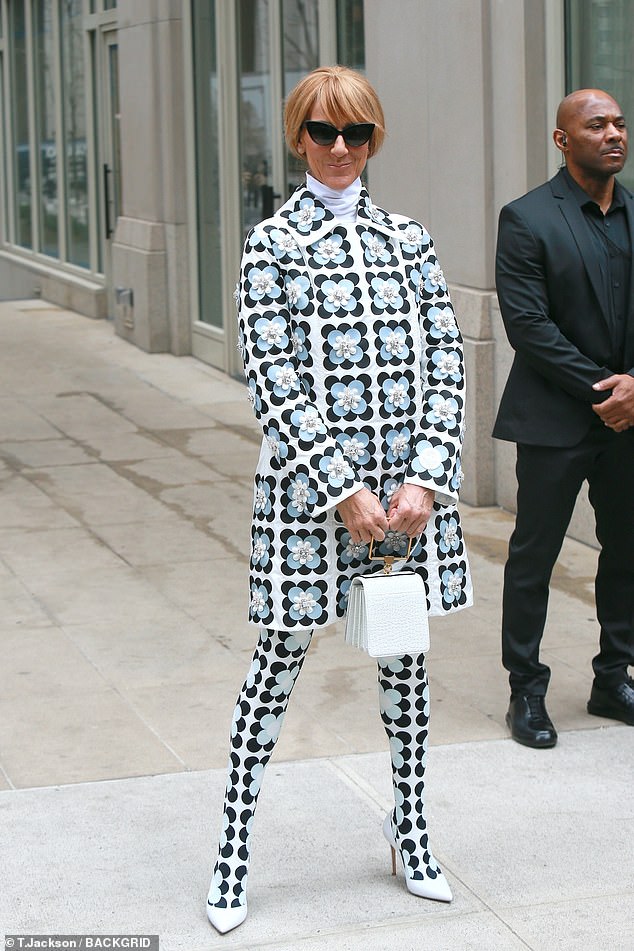 Crooner: Celine, pictured on March 3, has been in New York for a series of concerts 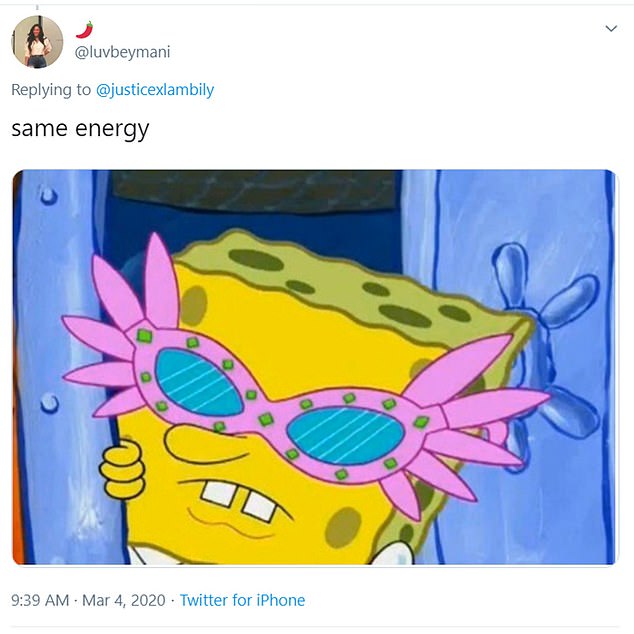 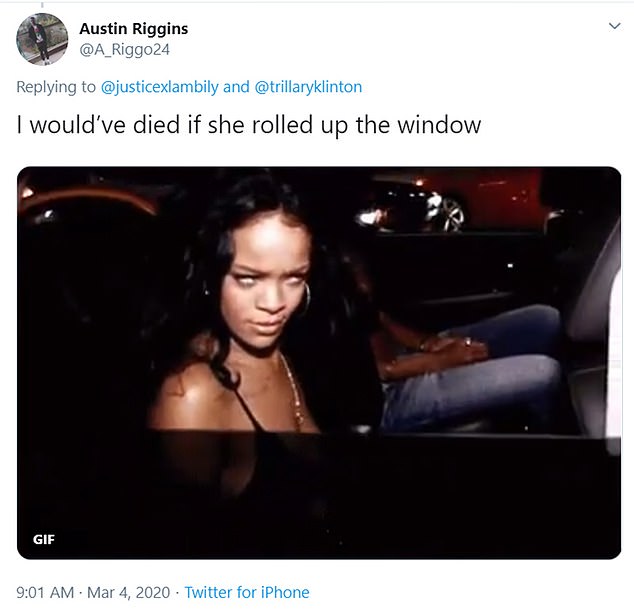 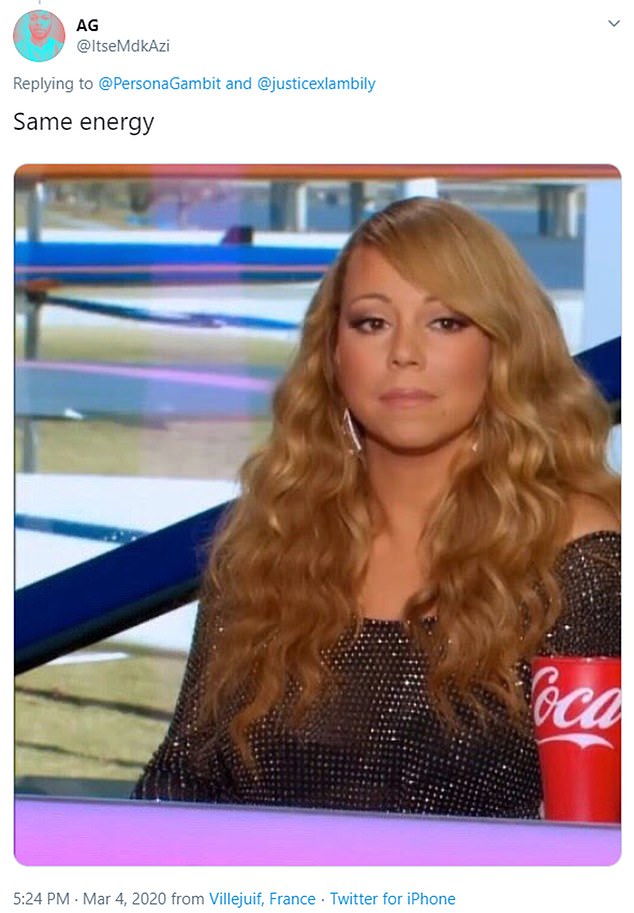 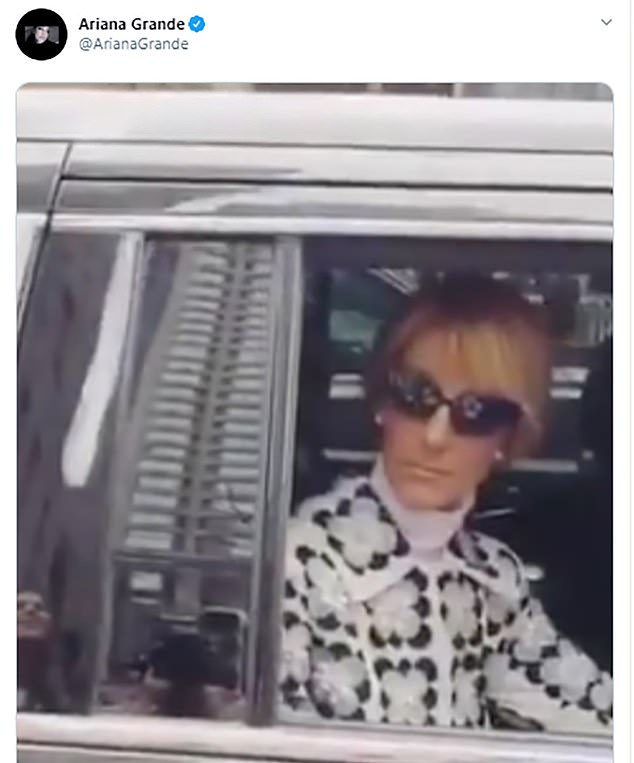 A bit of fun: Several people posted memes, and even Ariana Grande shared a screengrab, although she chose not to make a comment

‘Thank you for the messages, for the kind words, for the support,’ she told viewers on Instagram. ‘I am a little bit [at a] loss for words right now.

‘To the people writing really negative and rude comments — I understand, ’cause I cracked,’ she went on.

‘There’s always something in life that you can look at either in a positive way or a negative way. And I am really happy that I did it, even though I didn’t sound my best.

‘Because Celine was beautiful and she was gracious and kind. And for the people that have stuck up for me when people wrote negative things, thank you.

‘There’s always gonna be those haters, but it’s OK,’ she went on.

As for Celine, she said: ‘She was amazing. I definitely was shaking but it was a dream. And that’s always what I wanted to do since I was a kid, sing to an idol, an icon.’