Southampton boss Ralph Hasenhuttl reveals his players have been banned from shaking hands, signing autographs and taking SELFIES with fans as club tries to minimise chances of coronavirus outbreak at St Mary’s Stadium

Ralph Hasenhuttl revealed how he has banned his Southampton players from shaking hands, signing autographs or taking selfies with supporters until the Coronavirus scare subsides.

The Saints were beaten 3-1 by West Ham at the London Stadium and Hasenhuttl was responding to reports that Premier League officials could end the season early.

Like Newcastle United boss Steve Bruce, Hasenhuttl has banned shaking hands at his club, while they are trying to limit the contact between players and the fans. 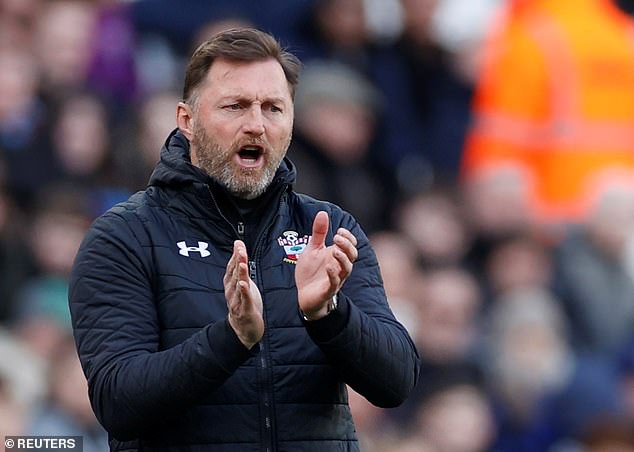 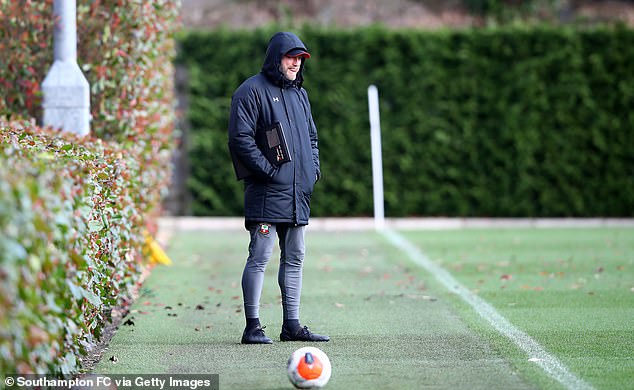 ‘We must pay attention to not have too much panic about it,’ Hasenhuttl said.

‘What you can do is keep your hands clean and try to avoid contact, like selfies and autographs.

‘You should try to avoid every contact with everybody, also the handshake in the morning.

‘The fans will understand it at the moment and we don’t want to spread it.’ 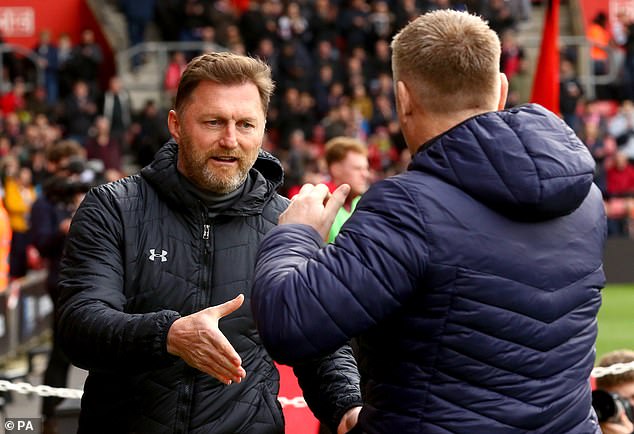 Like Steve Bruce’s Newcastle, Southampton have banned handshakes at the club 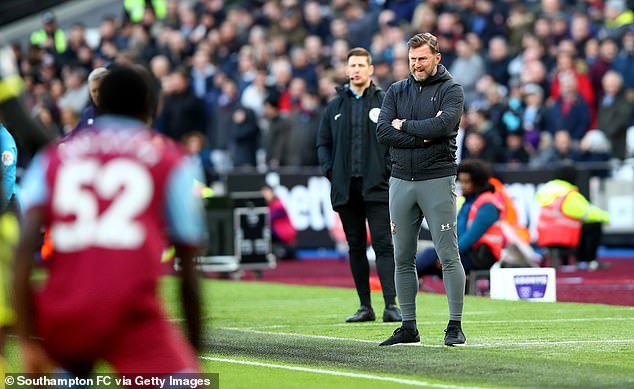 The scale of the outbreak in Japan saw senior International Olympic Committee member Dick Pound describe the disease as ‘the new war’ threatening Tokyo 2020 and he warned the Games may have to be cancelled if the virus was still around by May.

The Japanese government later insisted Pound’s comments were not the IOC’s official stance but there remains doubts over whether the summer showcase can still go ahead with health concerns.

Athletes have been told to keep training and the plan remains to hold the Games in Japan as planned but training for around 80,000 volunteers has been delayed for at least two months- it was due to begin on February 22.

World Athletics Indoor Championships (March 13-15 in Nanjing) is off until 2021.

The World Athletics Indoor Championships in Nanjing, China, has been postponed due to concerns over the danger of the coronavirus and its ability to spread

North Korea cancelled the Pyongyang Marathon scheduled for April after imposing a border lockdown due to the level of outbreak in South Korea.

The Seoul Marathon is cancelled in a bid to protect runners following the mass outbreak in South Korea.

The Paris half-marathon is canceled and the French government also decided to ban all indoor public gatherings of more than 5,000 people.

The race involving some 44,000 competitors was scheduled for Sunday (March 1) in the French capital city. Organizers said the race will be postponed to a date yet to be determined.

A mixed relay Olympic triathlon qualification event scheduled for Chengdu, China in May is moved to Valencia, pending an outbreak in Spain.

Olympic boxing qualifiers to be staged in Wuhan were cancelled by the International Olympic Committee, and now are relocated to occur in Amman from March 3-11

The IBF title fight between Daniele Scardina and Andrew Francillette in Milan on February 28 was postponed by Matchroom due to restrictions in Italy following the outbreak.

The Japanese boxing commission cancelled all fight cards scheduled for March on government advice to suspend all pending sporting fixtures. They will not be rescheduled.

Danish cyclist Michael Morkov has been cleared to race at the UCI Track Cycling World Championships after being kept in isolation over fears of an outbreak of coronavirus.

Morkov, 34, had travelled to Berlin on Thursday after contesting the first four stages of the UAE Tour, the final two stages of which were then cancelled after two members of staff on the race were suspected of having the disease.

Riders and staff on the UAE Tour have been in lockdown since but, after the Abu Dhabi Department of Health issued a statement on Saturday saying 167 tests had come back negative, the UCI said Morkov was free to race as normal.

All domestic fixtures at all levels are postponed by the Chinese Football Association as the season is pushed back due to the scale of the outbreak in China.

The start of the Korean K-League season is postponed. The four teams in the AFC Champions League playing their matches behind closed doors.

Japan’s J-League postponed all domestic games until the middle of March.

Inter Milan’s game against Sampdoria was one of four Serie A games cancelled last weekend due to affected regions in Italy leading to advice from the prime minister to call off sporting events.

Serie A then announced on Saturday that five of this weekend’s fixtures, including the title showdown between Juventus and Inter Milan, have been cancelled.

The home leg of the Chinese women’s national team’s Olympic qualification play-off against South Korea set for March is switched to Sydney. The squad are held in quarantine upon their arrival in Australia for January’s qualifying group stage due to fears of virus carriers.

Inter Milan’s Europa League match against Ludogorets on February 27 will be played behind closed doors. Only TV rights-holders are allowed to attend as media as the club look to secure the San Siro. Ludogorets players arrived in Italy wearing face masks.

Serie A announced five matches on February 28-March 1 will be played behind closed doors, including Juventus v Inter Milan in Turin, a huge match between title rivals.

Newcastle United have banned their players from shaking hands with each other amid coronavirus fears.

Three players from third-division Italian football club US Pianese have tested positive for coronavirus, the Tuscany side confirmed on Friday.

England’s friendly against Italy at Wembley in March is now in doubt as the FA holds crisis talks following the outbreak in northern Italy.

Israel has warned citizens to avoid all international travel, which raises questions whether supporters or players will travel to Scotland for their Euro 2020 play-off match on March 26.

Growing concerns that some matches at Euro 2020 could be called off if the coronavirus outbreak gets worse between now and the summer. The tournament is set to be multi-city. UEFA admit they are in a ‘waiting stage’ and must follow the orders of the individual countries involved. However, FA Chairman Greg Clarke has stated that he expects the tournament to go ahead.

The Chinese Grand Prix in Shanghai on April 19 is postponed with no decision over whether it will be reinserted into the 2020 calendar for later in the season.

The Australian Grand Prix will go ahead despite an emergency response plan being enacted across the country to deal with the virus. The chief executive of the tourism council says that Victoria cannot afford for the event to be cancelled.

The Bahrain Grand Prix is still planned to go ahead despite a number of flights from Dubai and the UAE into the country being cancelled this week due to coronavirus fears.

There are growing concerns over whether the inaugural Vietnam Grand Prix (scheduled to take place in Hanoi on April 5) will go ahead.

The Women’s Amateur Asia-Pacific golf championship, slated to take place from February 12-15 in Thailand, was postponed and has been rescheduled for October.

The Honda LPGA Thailand event in Pattaya, Thailand scheduled for February 20-23 along with the HSBC Women’s World Championship in Singapore, scheduled to start on February 27, were both postponed

The PGA Tour Series-China postponed two qualifying tournaments and delayed the start of its 2020 campaign by two months, cutting the number of regular season events down from 14 to 10.

The decision was made to cancel the LPGA Blue Bay tournament in China, with the event at Hainan Island (due to start on March 5) seen as dangerous to players’ health

Lorenzo Gagli and Edoardo Molinari were withdrawn from the Oman Open on medical grounds after Gagli showed symptoms of the virus. He shared a hotel room with Molinari and he was told to self-isolate. They were later reinstated to the tournament after testing negative for the virus.

The Japan Racing Association revealed that ‘government-sanctioned races’ will go behind closed doors.

Two race meetings in France next week are to take place behind closed doors in a response to the coronavirus outbreak.

Monday’s jumps card and the Wednesday fixture on the Flat at Compiegne will have no paying customers, with the order coming from the mayor of the town and the president of the Compiegne Racing Society.

Cheltenham festival is in doubt as organisers set up a steering group to consider the danger posed by the virus, just 13 days prior to the prestigious Gold Cup event

Scotland Women’s Six Nations match with Italy on February 23 is postponed due to an outbreak in the Milan area.

Ireland’s Six Nations meeting with Italy on March 7 is postponed.

Ospreys and Ulster’s Pro14 trips to play in Italy on February 29 are postponed. Ospreys were due to play Zebre in Parma with Treviso the venue for Ulster’s game against Benetton.

Hong Kong Rugby Sevens is postponed, which is a blow to Olympic preparations for Team GB.

Scottish rugby announced preparations ‘continue as normal’ as they discuss with French rugby whether to proceed with their Six Nations match on March 8 following a second coronavirus death in France.

The final of an ATP Challenger event in Bergamo, Italy, between Enzo Couacaud and Illya Marchenko of Ukraine is cancelled. Both players received ranking points and prize money for getting to the final. They were denied the opportunity to play behind closed doors.

China forfeited a Davis Cup tie because the men’s team were unable to travel to Romania for the March 6-7 playoff.

WTA event Xi’an Open (set for April 13-19) is cancelled due to fears over player safety. WTA announced they are assessing their schedule with a number of events set for China in the second half of the season.

Japan’s home Davis Cup tie against Ecuador next week is now set to be played behind closed doors.

WTA event Kunming Open is considered for cancellation after Xi’an Open was called off. It is due to start on April 27.

Cycling’s United Arab Emirates Tour has been cancelled with Chris Froome tested for coronavirus and Mark Cavendish put into lockdown in his hotel room.

South Korean baseball league cancelled all 50 pre-season game which were slated to take place from March 14-24. It is the first time since the leagues inception in 1982 that an entire set of exhibition matches are off.

The first-stage draw for the Table Tennis World Championships, scheduled for South Korea from March 22-29, is postponed.

A beach volleyball tournament, due to be held in Yangzhou from April 22-26, is postponed until after the Tokyo 2020 Olympics.

Next month’s World Triathlon Series event in Abu Dhabi was postponed on Saturday as a precautionary measure.

The event was due to take place from March 5 to March 7 in the city, which has reported new cases of the virus.

Event organisers said they still hoped to reschedule the event to take place later in March or April.

The Japanese professional baseball league made the decision to play their 72 pre-season games behind closed doors until March 15. Baseball is among the most popular sports in Japan.

The South Korean baseball league regular season is in doubt ahead of the first round of matches on March 28. An emergency meeting has been called.

Doubts remain as the Asian weightlifting championships, scheduled for March, are relocated from Kazakhstan to neighbouring Uzbekistan. They could still be postponed.