$19.6million ‘Glide Breaker’ hypersonic defense glider is being developed which can shoot incoming missiles out of the sky and travel up to five times the speed of sound

The Defense Advanced Research Projects Agency (DARPA) has teamed up with Aerojet Rocketdyne for a $19.6 million project to develop hypersonic rocket that will be capable of intercepting enemy missiles mid-air.

The glider will be able to knock incoming missiles or vehicles out of the sky while moving at up to five times the speed of sound.

The project had been in development since 2018, and the early stages of planning have gone well enough for DARPA to issue a new contract to develop ‘enabling technologies’ for the glider. 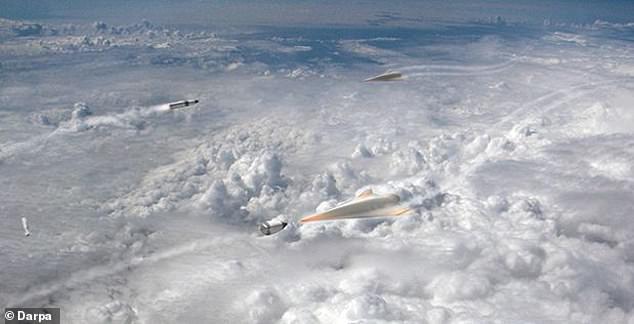 ‘Our team is proud to apply our decades of experience developing hypersonic and missile propulsion technologies to the Glide Breaker program.’

Gliders are launched into the atmosphere on high powered rockets and then released at heights of between 25 and 62 miles above the surface of the Earth.

Gliders have aerodynamic designs with smooth exterior shells that give them a high degree of mobility. 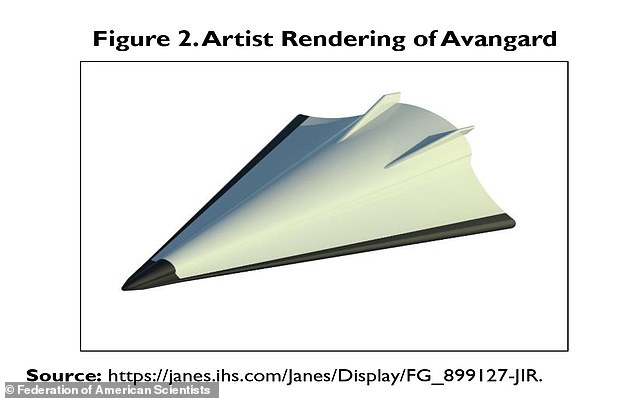 In December of 2019, the Russian military successfully tested Avangard (pictured above), a hypersonic cruise missile they claim can reach speeds of up to 27 times the speed of sound

Hypersonic cruise missiles are typically powered by an engine that collects oxygen from the atmosphere and mixes it with hydrogen in a combustion chamber.

Hypersonic cruise missiles can reach speeds of up to 7,500mph, or around ten times the speed of sound, and often even faster.

In December of 2019, the Russian military successfully tested a hypersonic cruise missile called Avangard, which they claim is capable of travelling at speeds of up to 27 times the speed of sound. 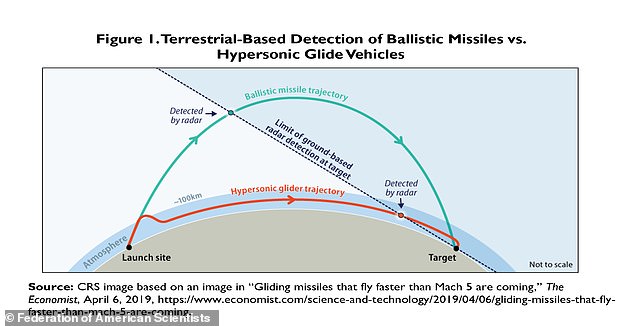 Hypersonic gliders tend to fly at lower altitudes and on flatter trajectories than ballistic missiles due to their lack of an internal combustion engine, making them an ideal candidate for defensive tasks

Two weeks later, Donald Trump claimed the United States is building a large stock of hypersonic missiles, potentially referring to a $2.5 billion contract signed with Lockheed Martin to develop a range of hypersonic weaponry in 2019.

‘Under construction are many hypersonic missiles. aThe fact that we have this great military and equipment, however, does not mean we have to use it.’

‘We do not want to use it. American strength, both military and economic, is the best deterrent.’

WHAT ARE HYPERSONIC WEAPONS?

There are two main types of hypersonic weapons:

A hypersonic glide vehicle is boosted aloft on a rocket to heights of between 25 miles to 62 miles above the earth before detaching to glide along the upper atmosphere towards its target.

It is released at a height and speed that would allow it to glide unpowered to the target.

Control surfaces on the glide vehicle mean it can steer an unpredictable course and maneuver sharply as it approaches impact.

These glide vehicles follow a much flatter and lower trajectory than the high, arching path of a ballistic missile.

These missiles are powered by high-speed, air-breathing engines after acquiring their target.

While they have internal engines,  unlike regular cruise missiles, they travel far faster and higher.