The bad blood between millionaire veteran television personality Daryl Somers and his former right-hand man looks set to spill into the courtroom.

PS can reveal Alex Mathey, the former chief executive and group legal counsel of Somers Group Australia Pty Ltd who reached an undisclosed but reportedly large settlement with the entertainer last December, has initiated fresh legal proceedings against Somers and his wife Julie to address, among other things, alleged breaches of trust and what he has claimed was an “unauthorised” transfer of land and to recover unpaid costs and fees. 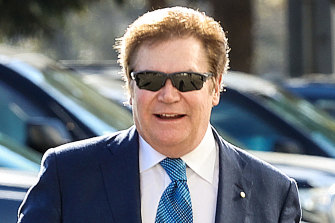 On Thursday a spokesman for Mr Mathey said the latest proceedings followed reports a fortnight ago in News Corp claiming Somers was suing Mr Mathey for defamation.

“Instead, it appears that the Somers’ preference is to litigate the matter through the Herald-Sun. Our client regards that claim as an improper attempt to punish and silence him, and he will strenuously defend any such proceedings should they proceed.”

In September, Mr Mathey lodged a WorkCover claim for serious injuries sustained during his employment at Somers Group.

“The subject matter of that claim is consistent with matters our client has raised previously. Mr Mathey settled that claim last December and received a substantial settlement,” Mr Mathey’s spokesman said.

“As provided under the WorkCover scheme, the settlement was made without admissions and specific details of the claim must remain confidential.”

According to reports earlier this month, a Supreme Court showdown was coming after Mr Mathey went public with the allegations of poor treatment.

In a writ filed with the court, Mr Somers, 69, is claiming damages over what he called a ­“defamatory matter”.

The former Hey Hey It’s Saturday host is also seeking a permanent injunction restraining Mr Mathey from “further publishing, ­republishing or causing to be published or republished” the material.

According to court documents, on June 16 last year Mr Mathey published an extensive statement online under the title “Dispute with Daryl Somers, Julie Somers and Somers Group Australia”, claiming his relationship with them “has devolved into a protracted and rather nasty dispute”.

“I consider that the Somers have treated me appallingly and, in fact, cruelly – in contravention of particular laws as well as in violation of generally accepted standards and norms of acceptable and appropriate behaviour and conduct,” Mr Mathey said.

“Despite my best efforts and intentions along with those of my legal team, the Somers have been unwilling and unable to even listen to and acknowledge my concerns, let alone entertain any sensible, reasonable or fair resolution to address them.

“I fully intend to hold the Somers to account and deal with the matters once and for all.”

Somers and his wife hit back, saying the allegations were “utterly false”.

“The allegations which have been reported are utterly false and without foundation,” they said in June last year. “We are obtaining legal advice.”

Somers, in the court documents filed this week, stated he and his wife “claim damages and consequential relief against the defendant for defamation arising out of the publication (of the statement).”