Skip to content
HomeLifestyleDitch the hard hat: Victoria’s problems are too complex to be fixed by a dollar blitz

We laugh about it, but it’s time for our state politicians to ditch the hard hats, the never-ending sentences, and the slick Twitter campaigns that reduce policy to slogans.

It’s time for them to step into the real world and see how much pain cost-of-living pressures are causing. Because at the moment, they don’t get it. 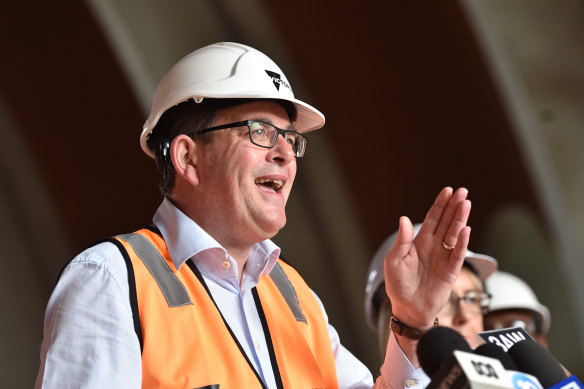 Let’s use Melbourne Cup Day as the starting point – that’s when the caretaker period kicks in and the campaign begins properly.

Once the Cup is run, let’s get some substance. Let’s cut back on the billion-dollar duelling promises and get some serious ideas on how to dig this state out of the economic abyss.

Most basic, let’s talk about how to help real Victorians who are really struggling and are about to suffer much more.

The contrast this week has been stark. The federal Treasurer, Dr Jim Chalmers, looked like Bambi in the gun sights as he warned tough times were ahead.

It’s a doomsday scenario, but the urgency and desperation has escaped our leaders in Victoria. Nobody wants to be negative, so they throw money around and pledge a new hospital on every street corner. Most are needed, but Victoria’s problems are too complex to be fixed by a dollar blitz.

In the real world, paying energy bills is already a huge challenge. I’ve taken calls on radio from families with young children who have cut their heating. The parental cliché lives on: dad following kids around the house turning off lights.

I have heard from pensioners who don’t know how they will cope. They say food is the priority, so the lights are off.

So what is on offer?

Pressed, Premier Daniel Andrews talks about free TAFE and kindergarten. Neither is new, or enough.

What about small businesses? Gas and electricity prices are crippling manufacturing. Some small operators say this will close their doors. What help is there for them?

Again, Labor’s policy is restricted to a slick advertisement. In it Premier Daniel Andrews promises lower power bills, more medical staff and ongoing “big build” projects, “all while bringing the budget back into surplus without cuts or closures”. How, premier? It’s loaves and fishes.

The opposition has a $2.5 billion manufacturing policy but it was announced almost a year ago. Business has changed. Where’s the new policy? They offer payroll tax relief, which helps 28,000 businesses. There are well over 600,000 in the state. What about the rest?

Labor claims it has a plan for cheaper energy through a relaunched SEC, but “plan” flatters it. When asked about immediate price rises, Andrews said his “plan” promised “lower prices”. He would not say how much lower. Industry experts say nobody knows. He would not say when this new cheaper power would flow. Experts say 10 years is optimistic.

Then, there’s the big, ugly, prosperity-burning monster. Victoria could hardly be in a worse position to face tough times.

The Institute of Public Affairs has assessed the economy and produced a document of disaster. Admittedly, this is a right-leaning organisation. But the figures have not been disputed.

And remember, the more debt, the more interest has to be paid. That means less money to spend on police, hospitals, and education. It means higher taxation to pay the bill.

The reckoning must come.

If that’s true, there is potentially a massive cyclone ahead for Victoria. The latest polling suggests a possible outcome next month is a minority Labor government relying on the Greens to survive.

This is a party with economic policies that seem designed to close the state. They want higher taxes, rent controls, higher public sector wages, and 100 per cent renewable energy within eight years. Oh, and more bike lanes, please. They are strong on dreaming, weak on reality.

Even without the Greens’ fantasy, Victoria’s prosperity is threatened. What is needed is a serious debate about cutting spending, raising revenue and balancing the books. But relax, it won’t happen.