Skip to content
HomeLifestyleEuro 2020 venues: What countries are hosting the tournament and is the final at Wembley?

EURO 2020 is in full swing with the knockout stages almost upon us.

Fans around Europe watching on the box will have noticed varying attendances across the eleven host cities.

Which cities are hosting Euro 2020?

This summer's competition will be hosted in 11 different cities, down from the original 12.

The stadiums hosting the competition are as follows:

How many Euro 2020 games are in England?

Eight. Wembley will host all three England group games, two round of 16 games, two semi-finals and the final.

How many Euro 2020 games are in Scotland?

Four. Hampden Park will have two of Scotland's games and the Croatia vs Czech Republic group game.

The Glasgow stadium will also host the final round-of-16 game. 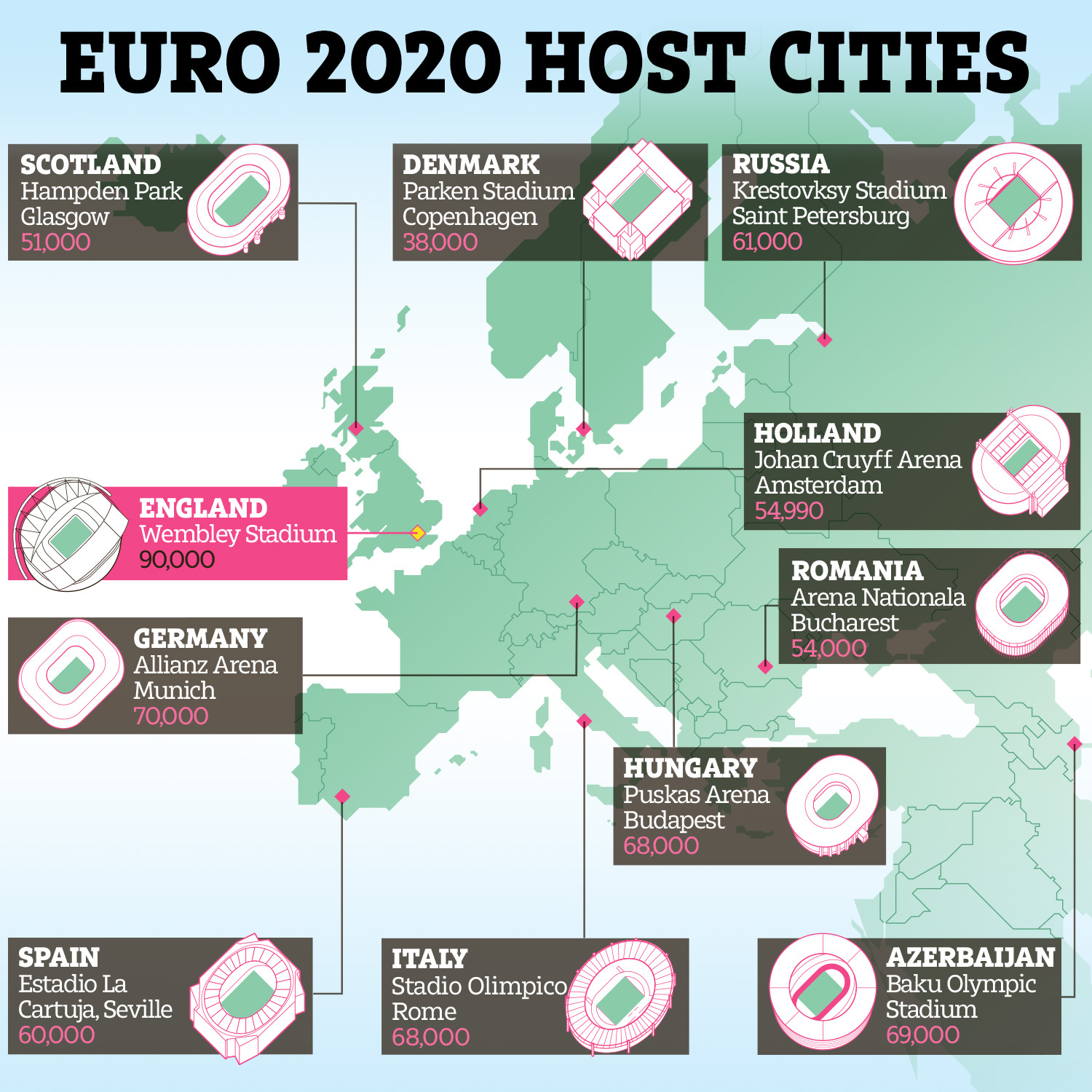 Which countries are still hosting Euro 2020 and how many fans will they allow?

The following countries are hosting the competition.

Wembley is set to host all England's group matches, plus the Euro 2020 semi-final and final and two last 16 games originally scheduled for Dublin.

All England's group games were held at a 25 per cent capacity, as was the last 16 game between Italy and Austria.

However, this will increase to 50 per cent for England vs Germany at the National Stadium.

Fans must show a negative Covid test or proof of two doses of an approved vaccine to enter.

After months of speculation, the Scottish FA confirmed that Scotland would be able to host Euro 2020.

Hampden Park is the venue for two of Scotland's Euro 2020 group games, plus Croatia's match against the Czech Republic and one last 16 match.

It will host games at a 25 per cent capacity.

Fans in Scotland will not need a 'vaccine passport' to enter games at Hampden, but social distancing will be 1.5 metres compared to one metre in England.

Azerbaijan is hosting all three Group A matches not involving Italy, as well as the quarter-final between Czech Republic and Denmark.

All matches are being held at a 50 per cent capacity.

Copenhagen is hosting all three of Denmark's group matches, plus Croatia vs Spain in the last 16.

The Danish capital was the first city to announce in 2021 that it would host Euro 2020 with fans.

Copenhagen's games are being held at a 75 per cent capacity.

St Petersburg hosted two of Russia's three home group games plus Finland vs Belgium, and will host one quarter-final.

In addition, it was handed the three group games that were set to be hosted by Dublin.

All matches are being played at a 50 per cent capacity.

Russia has been holding matches at half full stadiums throughout this season, while most of Europe has been playing behind closed doors due to coronavirus.

Romania failed to qualify for Euro 2020 but their national stadium hosted three matches from Group C and is hosting France vs Switzerland in the last 16.

Games in Bucharest are being held at a 25-45 per cent capacity.

Netherlands hosted all their own national team's group games as well as Wales' last 16 defeat to Denmark.

Matches were hosted at the Johan Cruyff Arena, Amsterdam with a 25-45 per cent capacity able to attend.

Budapest hosted two of Hungary's three group matches, plus a repeat of the Euro 2016 final between Portugal and France.

The Hungarian capital is the only city to announce that games will be hosted at full capacity, subject to strict entry requirements.

Italy was given extra time by Uefa to confirm that it could host fans at Euro 2020.

And the Stadio Olimpico in Rome is hosting games at a 25-45 per cent capacity.

Rome is hosting all of Italy's group matches and a quarter-final which could involve England.

The last of the original host cities to be announced – Munich was only confirmed on April 23.

The German city has committed to host matches in front of a minimum of 14,500 fans – a 22 per cent capacity – the lowest of all the host cities.

It will host all Germany group games and a quarter-final.

A last minute addition, Seville is hosting the games that would have been held in Bilbao after the Spanish FA deemed the Basque Government's conditions for hosting matches there "impossible" to meet.

The stadium is well prepared to host games, having been the Spanish FA's de facto home during the pandemic.

Estadio de la Cartuja has hosted all Spain games, two Copa del Rey finals and the Spanish Super Cup in the past 12 months.

Which cities have been removed from hosting Euro 2020?

The following countries failed to give Uefa the assurances they need to host Euro 2020.

Dublin will miss out on Euro 2020 after failing to give Uefa guarantees that any fans will be allowed to attend matches.

The Irish capital was set to host three Group E matches and a last 16 game that may well have ended up involving England.

The three group matches it would have hosted have gone to St Petersburg while the last 16 match will be held at Wembley.

Bilbao did commit to meet Uefa's minimum requirement of a 25 per cent capacity, however the Spanish FA refused to back their submission due to the conditions attached.

The Basque government had stated that it would be able to host games provided 60 per cent of the Basque country and the rest of Spain had been vaccinated and less than two per cent of those in hospital were coronavirus patients.

But the Spanish FA labelled these conditions "impossible" to meet.

As a result, Seville will host the matches that were set for Bilbao.

Will any cities allow fans of other countries to travel?

The following countries are set to allowing away fans to travel.

Azerbaijan has announced that fans of all travelling teamswill be able to submit a negative PCR test to enter the country instead of quarantining.

This offer only applies to citizens or residents of the participating countries.

St Petersburg is offering exemptions to entry requirements for all foreign residents with match tickets and a negative Covid test.

The Hungarian government will also accept a certificate of previous Covid infection in the 6 months before entering the country.

Romania is allowing foreign fans with two doses of the vaccine to attend matches.

Fans who submit a negative PCR test and restrict their stay in Romania to three days are also allowed to attend.

3000 Finland fans were allowed into the Parken Stadium in Copenhagen for their Euro 2020 opener against Denmark and Belgium fans for their second game.

However no fans from Russia were allowed into the third game.

England allowed Scotland fans to attend the game against the Three Lions at Wembley.

However, this trip did not involve crossing a border and no exemption is set to applied to fans of Croatia and the Czech Republic from overseas.

The FA are also reportedly considering allowing fans of the semi-finalists and finalists attend games under a bubble arrangement.

The best TV deals for Euro 2020 including LG, Sony, Toshiba and more