Federal health authorities are not keeping any records of how many Australians returning from overseas have been vaccinated and whether they develop COVID-19, despite the government saying it wants to shift to a home quarantine for the fully jabbed at some point.

Some states, included NSW, have begun collating the data on their own accord, despite having not being directed from their federal counterparts. 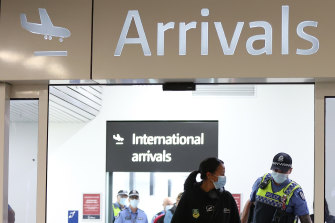 Border closures have stopped people coming in and going out. Credit:Getty Images

Britain and the United States began vaccinating their populations last year and have fully vaccinated half of those living in their countries, including thousands of Australians, since then.

The federal government has repeatedly said it wants to move to a system where some fully vaccinated Australians could serve out their quarantine at home, instead of having to pay $3000 to go through the hotel system. The move would free up capacity and gradually reopen entry borders for skilled migrants and other visas holders who’ve been denied access since March 2020 when the borders were slammed shut.

But Brendan Murphy, the secretary of the federal health department, said officials are not even keeping records of Australians who’ve been vaccinated going through hotel quarantine and whether or not they develop COVID-19.

“At the moment we are not collecting that information,” Professor Murphy told Senate Estimates.

“Some of the states and territories are asking people as they coming into hotel quarantine whether they’ve been vaccinated.

“We’re developing a plan, we have to work out which certificates of other countries we’ll trust. We will be working through which vaccinations overseas we will be able to recognise at some stage, we’ll have to get the TGA … there’s some vaccines we wouldn’t recognise as vaccines.”

The opposition’s spokeswoman for Home Affairs Kristina Keneally said the ongoing complacency was not good enough.

“The Morrison government is managing Australia’s international borders with a blindfold,” Senator Keneally told The Sydney Morning Herald and The Age.

“The Department of Home Affairs has no idea how many people entering Australia are vaccinated or with which vaccine.

“Mr Morrison’s complacency on the vaccine rollout is matched by his lack of interest to manage our borders and develop a system to track which returning Aussies have been vaccinated or not.

“This just isn’t good enough. This is basic information that the federal government should be collecting. Just like the disastrous vaccination rollout in aged care the Morrison government has no idea about which returning Aussies are vaccinated or not.”

Professor Greg Dore, an infectious diseases expert at UNSW’s Kirby Institute, said while the data would be helpful to have it was not essential because it was already possible to reduce the quarantine requirements on the fully vaccinated while still protecting the community.

“We need a more nuanced quarantine strategy,” he said.

“The data would be incredibly helpful but even without the data, someone coming from a relatively low-risk country who has a negative test prior to departure and is fully vaccinated – the risk of them having a breakthrough infection is exceedingly low.

“It’s not absolutely zero but it’s as close to zero as you could get.”

Professor Dore said that people in these categories could be placed in home quarantine and released subject to testing, which would be “equivalent to three to four layers of protection,” for the community.

The Department of Health said through a spokesperson that it was “working with the Department of Home Affairs to seek the addition of questions to be captured on the Australian Traveller Declaration (ATD) regarding an international arrival’s COVID-19 vaccination history.”

NSW Health is one of the jurisdictions that has been collecting and reporting the data.

The state’s records show that since March 1, just nine of the 379 returnees who tested positive for COVID-19 were reported among those who said they’d been fully vaccinated at least two weeks before arriving in Australia.

However, NSW Health said they may not have been fully vaccinated prior to being exposed to COVID-19.

When pressed on the vaccine rollout in the party room this week, Federal Health Minister Greg Hunt said the government was considering different regimes for people vaccinated, including the prospect of some quarantine-free travel.

The questions were put by Liberal MP Jason Falinkski who wants the international border safely reopened.

One trial could see Australians vaccinated by countries with comparable health systems serve out just a single night in hotel quarantine while their test is processed, and then freed if negative.

However, the task force evaluating possible travel options has only started modelling possible scenarios and is still awaiting more data before proceeding with the trial, possibly as soon as August or September.

Prime Minister Scott Morrison will next week become the third member of Cabinet in as many months who will travel overseas and quarantine at home upon his return, all having been fully vaccinated.