Two-time Olympic medallist Jess Fox has qualified for the women’s slalom K1 semi-finals with the fastest time, putting her firmly on track to challenge for an elusive gold medal.

Fox, the current world No.1, moved through to the next round of the event by posting a time of 98.46 seconds in a near-flawless second heat – her best time from two runs on Sunday at the Kasai Canoe Slalom Centre, and a whopping three seconds quicker than her nearest challenger, Germany’s Ricarda Funk. 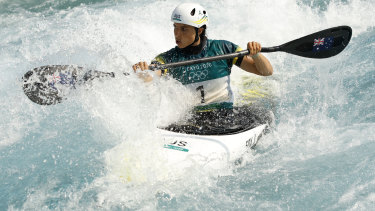 Jessica Fox in action in the kayak slalom heats on Sunday.Credit:Getty

Her first time, 104.05 seconds, was only just behind Funk in the first heat.

Fox’s performance comfortably ensured she would be one of the 24 competitors to have earned a spot in Tuesday’s semi-finals, with the K1 medals to be decided on the same day.

Fox, 27, is widely regarded as the greatest canoe slalom paddler of all time and is a three-time K1 world champion but is yet to stand at the very top of an Olympic dais. She won silver in this event at London 2012 and gold at Rio 2016, and is seeking to complete her set of medals in Tokyo.

But this isn’t her only medal chance at these Games – for the first time, Olympic organisers have brought in a women’s C1 slaloming event in Tokyo as part of the push for gender equity. Fox is amongst a small handful of paddlers who have qualified for both, and she’ll be confident of success after winning gold in the C1 at the recent Canoe Slalom World Cup. The women’s C1 starts on Wednesday, along with the heats for the men’s K1.

Meanwhile, Tasmanian paddler Daniel Watkins booked his place in the men’s slalom C1 semi-finals on Monday thanks to a vastly-improved performance in his second heat.

Watkins missed a gate in his first heat, accruing 54 penalty seconds to post a bloated time of 158.43 and putting him at threat of elimination – but his second attempt was much cleaner at 103.07 seconds, placing him 10th amongst the 15 competitors who moved through to the semis.

Watkins, who is competing in his first Olympics, will need to finish in the top 10 in the semis to reach the final later on Monday.

Never miss a medal or great sporting moment with our Olympic update emailed daily. Sign up for our Sport newsletter here.

Most Viewed in Sport