MANCHESTER UNITED legend Gary Neville has finally come out of “hiding” and broken his silence after Liverpool’s title triumph.

Earlier in the season, Red Nev joked that if Jurgen Klopp’s side won the league he would have to move to Papa New Guinea. 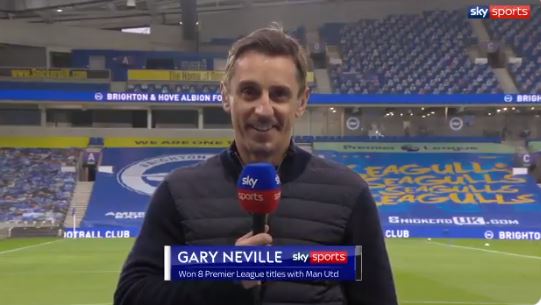 Soon after that 30-year wait to be crowned champions was confirmed thanks to Chelsea’s 2-1 win over second-placed Manchester City last Thursday, the Sky Sports pundit tweeted a waving emoji to indicate he would be disappearing.

That was followed by a short film on Sky Sports showing all of his fellow presenters desperately looking for him.

It ended with Liverpool icon Jamie Carragher promising “I will find you Gary” before the hashtag #wheresgary appeared on screen as a figure was shown boarding a flight for Papa New Guinea.

But as his old club United returned to top-flight action tonight in front of the Sky cameras at Brighton, so did Neville to the screen.

And the former Old Trafford captain was almost instantly asked for his reaction to Liverpool’s glorious achievement.

Neville said: “It’s an incredible achievement to win any title. It’s been coming for a couple of years, they’ve been knocking on the door.

“Last season, with what Manchester City did, they had to be at their absolute best.