Skip to content
HomeLifestyleGreys Anatomy, In Treatment And Pandemic-Related TV Are Exhausting But Necessary

In March, I had one of those “taking stock of things” moments when I least expected it. It was Month 13 of the pandemic, and somehow I was watching the 17th season of a TV drama that had become aggressively about the pandemic, in which the title character had contracted COVID-19. One indicator of the severity of her condition was measuring the physical distance between her and the ghost of her dead husband on a beach in her COVID-induced dreams. A year and a half ago, nothing in those sentences would have made any sense.

For most of this season of ABC’s never-ending “Grey’s Anatomy,” Dr. Meredith Grey (Ellen Pompeo), no stranger to perilous experiences, teetered between life and death while her fellow surgeons at Grey Sloan Memorial contended with the grim realities of the pandemic. The four major characters who have died over the course of “Grey’s” returned as ghosts in her dreamscape — most prominently her dead husband, Ghost McDreamy (Patrick Dempsey). It says a lot about both “Grey’s” and the hellscape of the last 15 months that even its fan-service elements, designed to offset the exhausting experience of watching real life unfold in the universe of the show, soon did not feel escapist. The ghosts’ presence, especially the recurrence of Ghost McDreamy, usually meant bad news. After I briefly tuned out during the scene when the correlation between his proximity and Meredith’s condition became crystal clear, I hit the pause button to confirm that, yes, he did move significantly closer to her, yelled at my screen in frustration and then thought that my reaction comically encapsulated just how much the pandemic has broken my brain.

I have assiduously avoided most shows that have heavily incorporated the pandemic. Yet I find myself admiring the hell out of the few shows I’ve happened to watch whose writers and producers specifically chose not to shy away from reality, even when their choices didn’t always land. More than a decade after its original run ended, HBO revived “In Treatment” because the network’s executives thought that viewers would need a show about therapy right now. Though the pandemic and the racial uprisings are not the sole focus of the characters’ therapy sessions, the effects of the isolation and burnout created by it all are always there, even in scenes where the characters don’t explicitly discuss them.

Other approaches that various TV shows have taken — ignoring the pandemic completely, acknowledging it for a few episodes and then letting it fade into the background, or mentioning it briefly and then placing the show in some vague post-COVID world — are certainly valid. After all, we’ve craved escapism over the last 15 months. And on scripted television, it’s challenging to figure out how to depict major events while they’re still unfolding in real life.

But on shows like “Grey’s” and “In Treatment,” in which grief, trauma, loss and their repercussions are central to their emotional resonance, it would have been a disservice to ignore reality and to tell audiences it’s OK to look away. They also demonstrate how there’s no one-size-fit-all approach: It has to be done in a way that makes sense for the show. 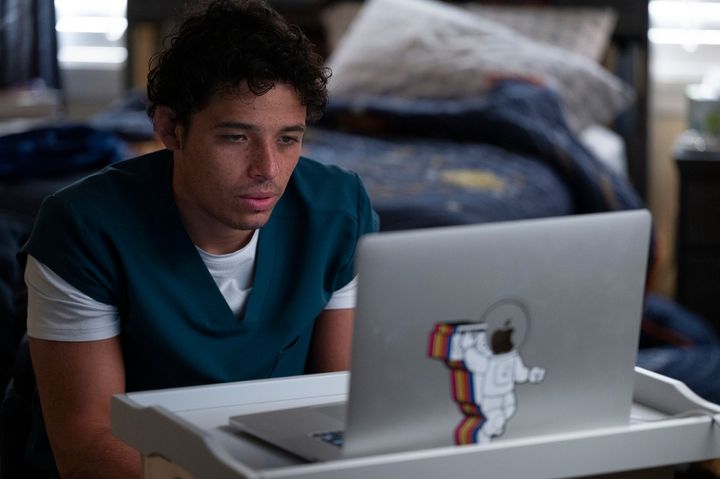 Since “In Treatment” is about therapy, naturally the characters’ anxieties and fears take center stage. The revival follows a similar format as the show’s original run, from 2008 to 2010, but with several welcome changes — most notably, a more diverse cast and an acknowledgment that for people of color, therapy is especially stigmatized and hard to access. Dr. Brooke Taylor (Uzo Aduba) sees three patients whom viewers follow from week to week. Each week’s final episode is about Brooke herself, who gets visits from her friend and AA sponsor Rita (Liza Colón-Zayas).

Brooke lives alone in a sleek but cavernous house that was designed by her father, whose recent death she’s struggling to process, on top of everything else in the world.

Sometimes the show’s topicality is overly blunt and direct, like when one of the patients, a white man, decries “cancel culture” and complains about having to learn what he can and cannot say.

But it mostly works. It’s tricky to pull off a TV show about therapy, in which an entire episode usually takes place in one room with two characters. In the case of Brooke’s patient Eladio (Anthony Ramos), a home health care aide quarantining with the wealthy family who employs him, he’s not even in the same room because he sees Brooke via teletherapy sessions. It’s the combination of Ramos’s riveting performance and the staging and framing of his episodes that makes Eladio this season’s most compelling patient. We see him both on Brooke’s laptop screen and in his room, where he often rotates his laptop, or gets up and moves around the space. “In Treatment” takes the staginess of its format and turns it into an advantage, rather than a gimmick or a distraction. And perhaps it works even more now, when many of us have spent a lot of time looking inward, alone with our traumas. 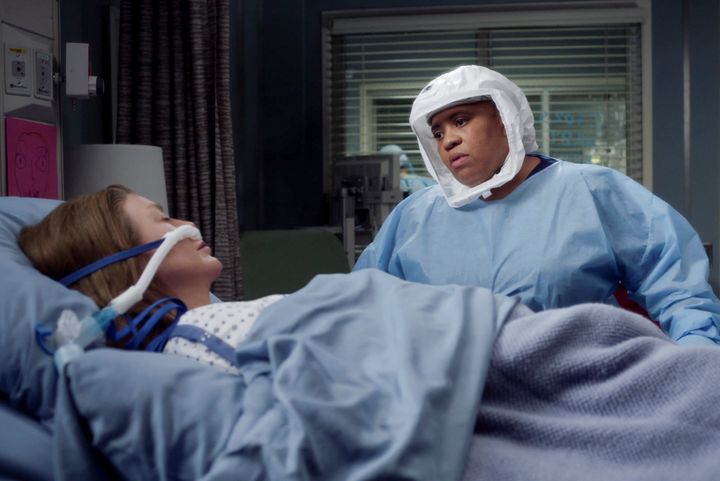 While the pandemic is the context on “In Treatment,” it’s the text on “Grey’s,” which has depicted the events of the last 15 months in unflinching detail. Grey Sloan’s surgeons have felt burned out and hopeless about their profession as they watched patient after patient die of COVID-19. They’ve run low on protective equipment and ventilators. They’ve had to treat patients who are COVID deniers and anti-maskers, and have frustratingly wondered how to even make a dent in the centuries of racial inequities in health care. The show has incorporated last summer’s racial uprisings and the surge in anti-Asian racism, and devoted specific episodes to illustrating the disproportionate toll of the pandemic on Black women and Native communities.

The show’s dialogue on these issues can get heavy-handed, telling instead of showing, which “Grey’s” is prone to doing. But there’s not much of a way around it, and it would have been strange for a major medical drama set in the present day to ignore the biggest health crisis in a century.

As grim as this season has been to watch, it all makes sense for “Grey’s.” Throughout its 17 seasons and counting, it has made a point of piling on tragedies and perilous situations, unrelentingly putting its characters (and us viewers) through the wringer.

I can’t believe I’m saying this, but there have been times this season when “Grey’s” could have leaned even more into real life. All season, Dr. Miranda Bailey (Chandra Wilson), Grey Sloan’s chief of surgery, has been burned out, which I wish the show had explored in more detail. Bailey, already carrying the weight of being a Black woman, watched her mother die of COVID-19 when it spread through her nursing home. Several of her colleagues, including her friend and former mentee, contracted COVID-19. One of her colleagues was murdered. And she has had to lead her staff through a crisis that has pushed everyone to their limit. She deserved more than the handful of scenes that she got.

As more people get vaccinated and start to move into something resembling post-pandemic life, we need to remember that we’ve experienced a prolonged period of deep trauma, which we’re only now beginning to process. That processing will look different for everyone. As much as I admire what these shows did, I doubt I’ll want to revisit them in the months and years to come, just as I don’t want to revisit the darkest days of the last 15 months.

But maybe we’ll want to take stock of how much these times have changed us — and, yes, broken our brains. Maybe we’ll want to remember the ways we documented what was happening, and these shows that chose to try to capture this strange and precarious time will become a time capsule.