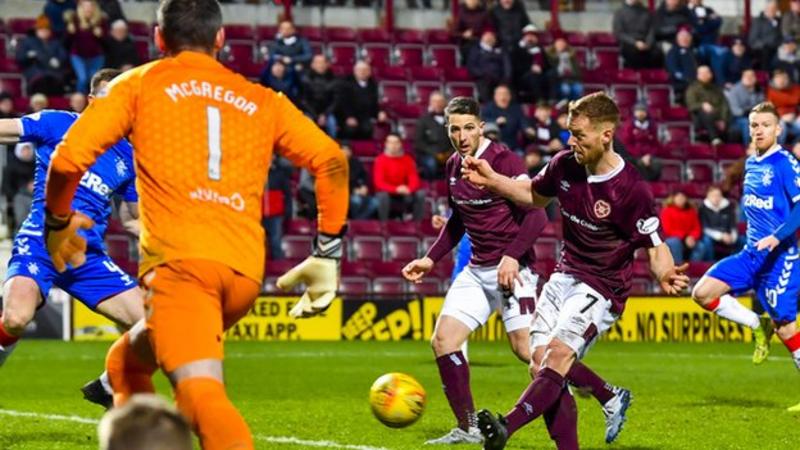 Hearts stunned Rangers for the second time this season to knock them out of the Scottish Cup in a fiery quarter-final at Tynecastle.

Rangers, who were without Alfredo Morelos after he was dropped due to a disciplinary issue, suffered defeat away to the Premiership’s bottom side after also doing so last month.

Oliver Bozanic drove Hearts ahead from a defensive mix-up, and they could have increased their lead in a strong showing that also saw Steven Naismith go close late on.

Hearts, who had a goal disallowed in the first half for an extraordinary Loic Damour handball, will find out their opponents in Sunday’s semi-final draw, and they could be paired with Edinburgh rivals Hibernian after they beat Inverness Caledonian Thistle on Friday.

However, the result came at a cost with defender John Souttar suffering a season-ending Achilles injury after just 16 minutes after falling to the ground off the ball, with Scott Arfield and Ryan Jack forced off early for the visitors.

Whether it was the arrival of storm Jorge or the fact that there were many empty seats in the home end inside Tynecastle, the atmosphere was very flat in the opening period.

But with Rangers looking lacklustre up front in the absence of Morelos, the benched Jermain Defoe and the cup-tied Florian Kamberi, Hearts twice came close to opening the scoring.

Steven Naismith forced Allan McGregor into a fingertip save with a header from eight yards out, and Damour had a volley blocked from close range.

Referee Steven MacLean was having a difficult night and Rangers midfielder Jack may well have been lucky to only see a yellow after a high challenge on Michael Smith.

But just as the first half was petering out the game burst into action.

As Steven Naismith raced towards the Rangers goal, defender George Edmundson clearly used his left arm to help usher the ball away from danger. However, the incident was missed by the referee.

The controversy continued from the corner when Damour used both hands to flick the ball beyond the visitors defence and into the bottom corner of the goal. MacLean initially awarded the goal but after hails of protests from the Rangers players, changed his mind and gave the visitors a free-kick. But, he elected not to give the Frenchman a second yellow card, and on the half-time whistle Steven Gerard and Naismith argued their points at the mouth of the tunnel.

Early in the second half Damour had a volley deflected wide by the knee of Edmundson as the visitors defence continued to look shaky.

The home side grew in confidence, with the breakthrough coming giftwrapped.

James Tavernier struggled to clear, Lewis Moore chased what looked to be a lost cause, cut the ball back for Bozanic after McGregor had committed himself, and the ball was hammered home from close range.

Rangers pushed forward, leaving gaps at the back. And, after a mistake by Edmundson on the edge of the box, Naismith was given a clear view of goal but the ball sliced off the edge of his boot and wide of the target.

The visitors did have chances with Edmundson twice heading over from around six yards out, but the Hearts defence stood firm to earn their place in the semi-final.

James Tavernier (Rangers) wins a free kick in the defensive half.

James Tavernier (Rangers) wins a free kick in the defensive half.

Ryan Kent (Rangers) is shown the yellow card for a bad foul.

Sean Clare (Heart of Midlothian) wins a free kick in the defensive half.

Clévid Dikamona (Heart of Midlothian) wins a free kick in the attacking half.

Sean Clare (Heart of Midlothian) is shown the yellow card.

Jermain Defoe (Rangers) wins a free kick in the attacking half.

Attempt missed. George Edmundson (Rangers) header from the right side of the six yard box is just a bit too high.

Attempt blocked. Sheyi Ojo (Rangers) left footed shot from the right side of the box is blocked.

Attempt missed. Steven Naismith (Heart of Midlothian) right footed shot from the centre of the box misses to the right.

Craig Halkett (Heart of Midlothian) wins a free kick in the defensive half.

Attempt saved. Clévid Dikamona (Heart of Midlothian) right footed shot from outside the box is saved in the top centre of the goal.

Borna Barisic (Rangers) wins a free kick in the attacking half.

Ianis Hagi (Rangers) wins a free kick in the attacking half.

Attempt blocked. Lewis Moore (Heart of Midlothian) left footed shot from the centre of the box is blocked.

Attempt missed. Ianis Hagi (Rangers) right footed shot from the right side of the box is too high.

Attempt saved. Ryan Kent (Rangers) right footed shot from a difficult angle on the right is saved in the bottom right corner.