How Paul’s Tune played on Britain’s heartstrings: He’s the concert pianist with dementia whose four-note melody shot to Number One – leading a tycoon to donate £1m to charity and reducing Holly Willoughby to tears

At 80 years of age, ex-music teacher Paul Harvey is one of the oldest and most unlikely of UK chart-toppers with his surprise hit, Paul’s Tune.

But then again, everything about the meteoric rise to the top of the iTunes and Amazon charts this week of his beautiful, improvised piano composition — based on just four random notes — is remarkable.

For the past two years, the former composer and concert pianist has suffered from worsening dementia and — despite his musical talents remaining undimmed — the disease has rendered him incapable of fully appreciating his No.1 single. 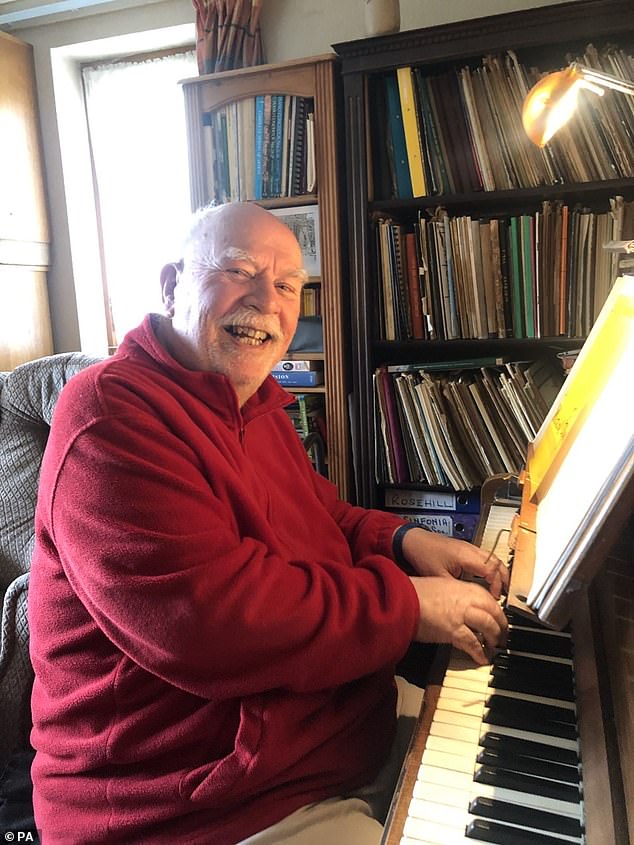 For the past two years Paul Harvey, 80, pictured, has suffered from worsening dementia

When his son Nick, also a composer, first delivered the news he was trending on social media, Paul responded: ‘That’s nice, remind me again what time is my food shopping being delivered this afternoon?’ Then, when Nick rang him on Friday night to tell him his hit had featured on the TV programme Gogglebox — reducing the viewers to tears — he replied, confused: ‘What’s Gogglebox?’

Mr Harvey’s humour, though, remains as untouched as his music and he says of his dementia: ‘I have to look up what it is I’ve got, because I can’t remember.’ 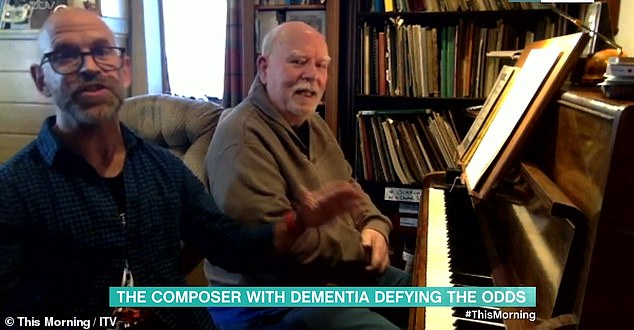 Ex-music teacher Paul Harvey is one of the oldest and most unlikely of UK chart-toppers with his surprise hit, Paul’s Tune

After a whirlwind of television appearances in the past few days, though, Paul Harvey will never be forgotten — a shining example of the power of music to reconnect those living with dementia with the essence of who they are.

On Monday, Scottish tycoon Sir Tom Hunter, who lost both his parents to the disease, announced on BBC Breakfast that he was so moved by Paul’s Tune — and the touching bond between father and son — he’d decided to donate £1 million to Alzheimer’s charities.

The inspiring story started in September when Nick Harvey posted on Twitter a two-minute clip of his dad’s ‘party trick’ which had always astonished him as a child growing up.

‘Dad’s ability to improvise and compose beautiful melodies on the fly has always amazed me,’ he wrote.

‘Tonight, I gave him four random notes as a starting point. Although the dementia is getting worse, moments like this bring him back to me.’

Plucking four notes out of the blue — F, A, D and B — Paul rose instantly to his son’s challenge and, seated at his upright piano in a red striped shirt, immediately launched into a note-perfect improvisation.

So impressive was the off-the-cuff composition, the clip went viral overnight, attracting 1.8 million views, more than 3,000 comments and almost 65,000 likes. 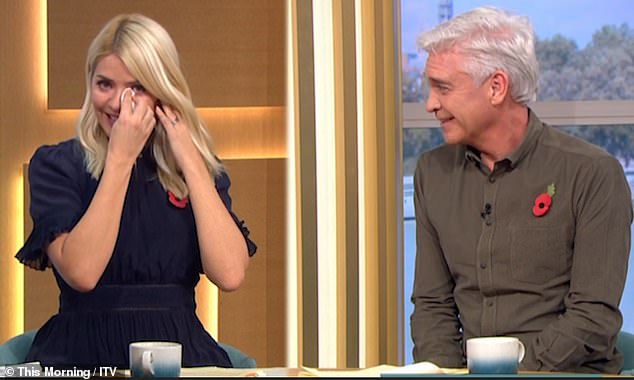 Emotional: Holly Willoughby was moved to tears on This Morning by a pianist who suffers from dementia 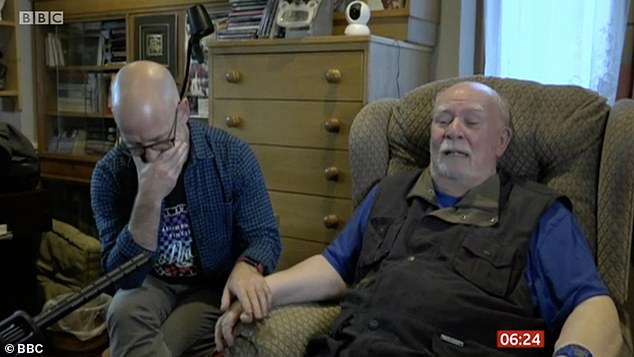 Mr Harvey, right, recorded a piece of music along with his son Nick, left, and the BBC Philharmonic Orchestra

Overwhelmed by the response to his father’s video, Nick updated fans with the news: ‘I just rang him to tell him that he’s gone viral. He replied, saying that as long as the virus isn’t Covid, he’s happy.’

That, however, was not the end of it, and offers to appear on TV and radio flooded in, with father and son bringing Paul’s Tune to a wider audience. Indeed, Paul even knocked out a new improvised melody for Piers Morgan and Susanna Reid on ITV’s Good Morning Britain because —poignantly — his dementia means he cannot remember the notes to play the original.

The genesis of the track, which would eventually go to No.1 started with the BBC radio show Broadcasting House, presented by Paddy O’Connell, which led to a request to orchestrate and record Mr Harvey’s four-note improvisation.

The BBC Philharmonic Orchestra didn’t have to think twice about accepting, and with parts composed for every instrument by arranger Dan Whibley, the musicians recorded their sections at home.

The result was so stunning, Paul’s musical hero, legendary composer and lyricist Stephen Sondheim, even paid tribute via video message: ‘I love your tune, I am going to steal it.’

As beautiful though the piece is, and inspiring the story behind it, would anyone actually buy it? ‘So, err, just testing the waters here, but if this were to be released as a single to raise money for a dementia charity, would you be willing to buy/download/stream it?’ Nick asked his father’s new fans.

The answer, a resounding yes, came when the single sped to No.1 in the UK’s official download charts — just seven days after it was premiered on Radio 4’s Broadcasting House. All proceeds will be split between the Alzheimer’s Association and Music for Dementia.

Nick, who now describes himself as ‘Dad’s accidental agent’ — albeit one ‘delirious with nervous exhaustion’ — revealed that the excitement of releasing a single had energised his father, adding ‘I haven’t seen him this lucid in a long time.’ 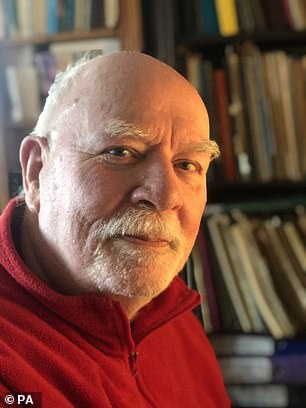 Today, Paul Harvey, is taking his new-found stardom in his stride at his sheltered accommodation in East Sussex — though he is humbled by the audience he has reached

The day after BBC radio premiered the single, Nick recalled ‘bawling my eyes out’.

He added, ‘What a day. What a ridiculous, wonderful, crazy, magical day.’

As for the moment last Tuesday when Paul’s Tune was made available to buy, he declared ‘I’m genuinely feeling bloody emotional.’

The very next day it topped both the Amazon and iTunes charts, with proud Nick admitting: ‘I have tears rolling down my cheeks.’

Today, Paul Harvey, is taking his new-found stardom in his stride at his sheltered accommodation in East Sussex — though he is humbled by the audience he has reached.

‘I am filled with awe that so many people like my music,’ he said, praising the ‘lovely’ arrangement by the BBC Philharmonic Orchestra, in a video message to supporters.

‘I am so pleased the money is going to worthy charities. I am still filled with wonder that that’s my tune and it’s taken off.’

He added later that he hadn’t expected all the ‘fuss and palaver’.

‘Fortunately, because of my age, I am a bit laid-back about the whole thing, in the nicest possible way.

‘Mind you, I wouldn’t mind conducting the BBC Philharmonic — they were fantastic. I would love that,’ he told the Observer.

Although Paul’s dementia means he cannot perform an encore of the melody that has created such a huge sensation, music has the power to restore him to the way he once was.

‘My memory is fine when I am playing the piano,’ Paul explained. ‘I can remember all the things I’ve done.

‘When I am looking at television or other things around where I live, then I start forgetting things.’

He continued: ‘And if something is not in the right place, then I panic a bit. But if I’m a bit stressed, I will go and play the piano, and I’ll be all right then.’

For Nick, who has inherited his father’s talent and written music for many TV series and shows, the success of Paul’s Tune is so much more than just a hit single — it’s given him back the father he is losing to dementia.

A former composer and concert pianist, Paul — who was born in Stoke-on-Trent and studied at the Guildhall School of Music in London — decided to become a music teacher just before Nick was born.

For 20 years he taught at the Imberhorne School, a comprehensive in East Grinstead, West Sussex. Many of his former pupils have been in touch since the release of his hit single to remember themselves to him and to reminisce.

Nick said he realised something was awry a couple of years back when his wife Ali invited his father for Sunday lunch and he arrived at 6am ‘looking flustered and confused’.

Despite occupational therapy, attendance at a memory clinic and regular home care at his sheltered housing, Nick noticed his father’s growing depression, caused by his condition.

Normally, playing one of his old compositions or a classical piece brought his father back to himself, but when Nick asked him to pick something out on the piano he faltered.

‘His fingers were stumbling, his foot was slipping off the pedal and he was becoming more and more agitated,’ Nick recalled. ‘I remembered this old party trick he used to do, where someone would give him four random notes and he’d compose something on the spot.

‘The first time I saw him do this was when I was nine, he was teaching at a summer school. I remember the pride I felt.

‘So I picked four notes out of the ether and Dad did exactly the same thing.

And luckily I filmed it’ says Nick, who believes that improvisation frees his father from the constraints of trying to remember.

‘It wasn’t a composition. It wasn’t something that he had crafted over days or hours.

‘But because I captured it, it’s now living and it’s become an entity, which is astonishing,’ he told the Observer.

‘I’ve always felt that his music deserves a large audience, and the fact that now he is finally getting it — it fills my heart with joy.

‘For those living with dementia, the ability to communicate is one of the last things to go.

‘I wouldn’t be surprised if this also applies to Dad and his improvising. Dementia won’t be shutting him up for quite a while yet.’

To Nick, his father has always been the most talented musician he knows.

Now, in his 80th year, Paul has become an astonishing chart-topping phenomenon.