For the latest hit film to come out of Australia, the gripping psychological drama The Invisible Man, it was crucial that becoming 'unseeable' seemed scientifically plausible.

Audiences had to believe that a controlling tech billionaire terrorising his former partner had developed a way to make himself invisible in director Leigh Whannell's inventive take on a classic sci-fi story. 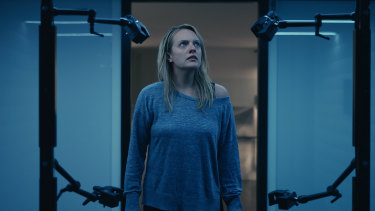 And it is testament to the filmmaker's work that The Invisible Man has received overwhelmingly positive reviews, topped the box office in the US, UK and Australia last weekend and given a glimpse into a futuristic technology that might be possible in as soon as five years.

In H.G. Wells' famous 1897 novel The Invisible Man, which launched an iconic sci-fi and horror character, a former medical student uses a chemical formula to make himself invisible.

For a #MeToo era take, with Elisabeth Moss as an architect terrorised by her abusive former partner, Whannell and production designer Alex Holmes wanted a more realistic version.

"We wanted to treat it like a thriller or a drama, not a horror or sci-fi movie," Holmes says. "All our talks were about trying to find a way to make the tech feel totally believable." 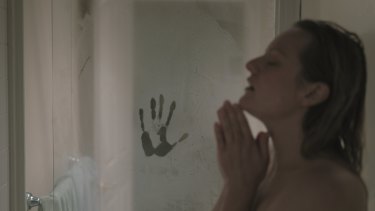 Terrorised by a former partner who has developed a technology to make himself invisible: Elisabeth Moss in The Invisible Man.Credit:Universal

After investigating research into invisibility around the world and finding the most advanced ideas did not translate well to film, he devised a "camera and hologram projection system" – a suit stacked with cameras and displays that record the villain's surroundings and transmit them on its surface to hide his presence.

The idea – a form of mobile active camouflage – was inspired by an abstract image of what looked like a wetsuit made up of irises inside hexagons that Holmes found online.

"In our meetings, everybody responded to that image the most," he says. "The VFX guys got really excited and said 'we can animate irises' and 'we can do holograms'."

Holmes contacted Jim Rabeau, a physics professor at the University of Sydney and deputy director of the Sydney Nano Institute, to see how plausible the idea was. 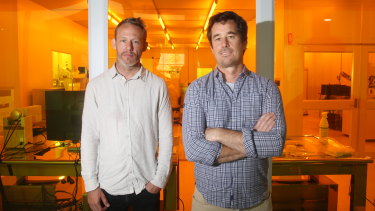 While recognising nothing like it was possible in the near future, Professor Rabeau thought it was "a really neat idea" that was conceptually credible. And he thinks it works convincingly in the film.

Holmes designed a room in the character's stylish clifftop house that had the suit hanging on a frame that feeds electricity into it, with an iPad revealing the invisibility effect.

Professor Rabeau believes the most viable invisibility technology in the near future involves a material that effectively bends light around an object. A Canadian company has demonstrated how an apparently transparent – if blurry – screen can hide a person or a small model of a military jet.

"To some extent, they have demonstrated in the lab that it could have an industry or defence application," Professor Rabeau says. "I'd say that within five years, there is likely to be some applications in invisibility and cloaking."

But as the film shows, there are dangers. While an exciting field of research, Professor Rabeau says the technology needs to be developed in an ethical way.

"It's unlikely there will be an invisibility technology that's perfect," he says. "The human brain is more advanced than anything I can imagine when it comes to this type of technology. But in the wrong hands, there would be concerns."

Holmes says it is hard to see how invisibility could have anything other than a military or surveillance application.

"It's not something that's going to be very useful in any sort of positive sense for humanity," he says. "That's what the film is about: how much it can be taken advantage of."