Daniel Andrews built his reputation as an election-winning premier in Victoria on the ability to get things done. It was about projects: level-crossing removals, the idea of a Suburban Rail Loop, tunnels, sky rail. The electorate liked Mr Andrews’ ability to deliver.

Then along came the coronavirus pandemic. In the chaotic early days, Mr Andrews along with other state premiers asserted their primacy as the ones who could deliver. They set up and took responsibility for hotel quarantine, they ordered the lockdowns as required, and they closed state borders, sometimes too rapidly. Apart from the vaccine rollout, the premiers were in command. 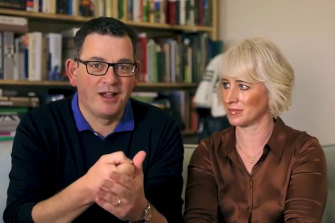 The Premier and his wife, Catherine, in a still from the video released on Sunday. Credit:Twitter

Now Mr Andrews is back. At 110 days, his absence lasted almost as long as Daily Dan’s media conferences. The Premier’s accident was serious and The Age, like all Victorians, welcomes his recovery.

One of the Premier’s jobs is to “sell” the most favourable narrative to the public, and that requires media management. In recent days, The Age has found itself in conflict with the government about our different role as the most widely read masthead in Victoria. We have requested and been promised a sit-down interview with the Premier since the second lockdown last year.

His return to office would have provided an important opportunity for a reflective and revealing interview. But The Age could not accept the government’s insistence that an interview could only be conducted by Age columnist and former broadcaster Jon Faine.

We have great respect for Faine, who has known the Premier for many years through his former ABC broadcasting job, but The Age cannot be told who will conduct our interviews. In this case, we believed it should have been done by a senior staff journalist at The Age rather than a contributing columnist, and we reluctantly declined the interview because the government would consider nobody else.

The Faine interview was to be run today on the ABC’s website, but late on Sunday the ABC pulled it, with a spokesperson saying Mr Andrews’ video released yesterday contained much the same material and so the interview would not be published.

The slick, well-produced video had Mr Andrews and his wife, Catherine, discussing some of the details of the accident and his recovery and the Premier pledging to fight the next election. The ABC’s reasoning for pulling the interview is spurious, but perhaps this tiny saga reveals the limits of media manipulation.

The fuss around Mr Andrews’ return will fizzle soon enough and the unfinished business is more important. A resurgent COVID-19 presents a danger to us all and the Premier needs to try to come up with a toolkit for addressing it that avoids more blanket lockdowns, although NSW’s failed attempt to do this shows how difficult that task is.

He needs to grapple with the economic, social and city planning ramifications of the four lockdowns we’ve endured, including the impact on our CBD and on our single biggest export: education. And he needs to bring whatever influence he can nationally to accelerate the chaotic vaccine rollout.

Mr Andrews’ authority may have been weakened in recent months, but he remains a formidable political figure. The challenges ahead are as crucial as any he has faced to date.

Gay Alcorn sends an exclusive newsletter to subscribers each week. Sign up to receive her Note from the Editor.