Hayley Mary was living in Edinburgh in 2018 when she applied for a job in a cafe called Smith’s Deli. Her sales pitch in the interview was, at best, half-hearted.

“I said, ‘I can’t really make coffee and I’ve never really worked in a cafe, and I don’t really like people. I’m not very good at customer service’,” she recalls. “And [the owner] was like, ‘you remind me of Chrissie Hynde, you’ve got the job'.” 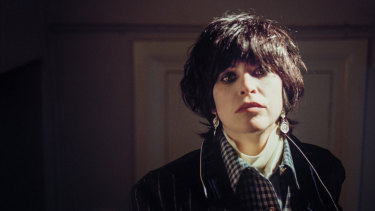 Hayley Mary wanted to make a solo album that sounded like “your parents are Roy Orbison and Cyndi Lauper”.

Mary recounts this anecdote on the phone from Canberra, where she’s just finished a solo performance at a university O Week celebration. When fronting Sydney outfit the Jezabels, Mary is more used to headlining such gigs than opening them.

“I feel like I’m starting again,” she offers. “But that’s exciting.”

While stressing that the Jezabels remain an ongoing concern, for now Mary is pouring all her efforts into her solo career and debut EP The Piss, The Perfume. Five songs of pop-laced indie rock with an Americana flourish, it’s a sound that took some searching – personally and professionally – to find. Mary refers to a period of aimlessness following the Jezabels’ decision to go on hiatus after completing touring for 2016’s Synthia.

“It was a bit of a lost period,” she says, one that consisted of “wandering and drinking and not caring and being self-destructive”. It was, she adds, “a pretty low few years”.

Falling in love helped provide some direction, as did her decision to focus her writing around the guitar. “That helped pin [my sound] down – make songs that are good with just [me] and a guitar. I wanted to go to the basics of how I wrote as a kid.”

Mary says her partner, DMA’S guitarist Johnny Took, pushed her “to become self-sufficient as a songwriter”. She took his words to heart when the two moved to Edinburgh for a year part way through 2018. It was there, as the reality of having to work a regular job set in, that Mary’s resolve to launch her solo career hardened.

“Getting up at 5am and riding through the rain in the Scottish winter to this cafe job and having miserable tradies coming in and being grumpy at me because the coffee machine wasn’t on, I was like, ‘I need to write some songs! Now!’”

With Took regularly away on tour, and Mary’s financial situation such that on occasion she was unable to afford heating in her apartment, it’s remarkable The Piss, The Perfume remains such a buoyant listen. “I’ve always written my most feelgood music when I feel bad,” she says. “It’s kind of like a wish, an expression of a desire that I put in a song, not a reflection.”

With an upcoming tour of the UK and Ireland, Mary’s period of aimlessness has clearly come to an end. She’s not, however, under any illusions as to the work ahead. “It’s back-to-basics touring. F—ing character building,” she days, chuckling. “I thought I already had a character, but apparently the universe thinks it needs to be bigger. So here we go!”