Skip to content
HomeLifestyleIn from the cold: Albanese breaks the ice of our Chinese winter

In retrospect, there were various signposts pointing to Chinese President Xi Jinping’s ice-breaking meeting with Anthony Albanese in Bali on Tuesday.

One of the more obscure, perhaps, was China’s ambassador to Canberra, Xiao Qian, seeking out Peter Dutton for a chat, which took place last week. 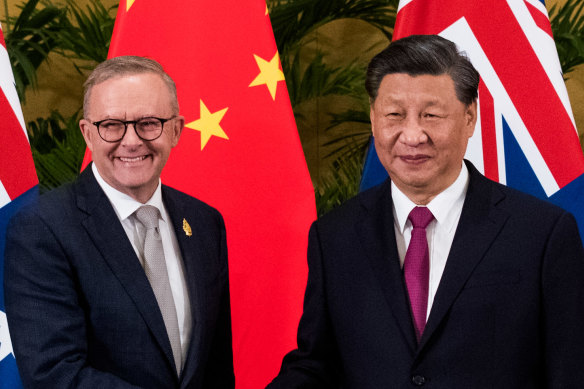 Why would the ambassador want a catch-up with the opposition leader, who in the former government had been one of the loudest voices warning of the danger posed by the increasingly assertive superpower?

One answer is that preparation for what has been dubbed Xi’s current broad “charm offensive” was comprehensive.

The meeting with Xi has been the showstopper of Albanese’s summit-season trip – including the East Asia and ASEAN-Australia summits, the G20 and APEC – from which he returns this weekend.

For the PM, having the bilateral relationship begin to stabilise and move to a more constructive footing, after China had relegated Australia to “the freezer” for years, is the culmination of a very successful first six months on the world stage.

It will be all the more satisfying for Albanese personally, because December 22 marks the 50th anniversary of the Whitlam government establishing diplomatic relations with China. This was one of that government’s earliest acts, following Gough Whitlam’s ground-breaking visit to China as opposition leader and preceding a 1973 prime ministerial trip.

The new Australia-China rapport has to be seen in both multilateral and bilateral contexts.

China, for its own reasons, is lowering the temperature in its international relations. Its economic problems (fuelled by its COVID-zero policy) may be one factor driving this. Also Xi, now his leadership has been further strengthened by the recent 20th party congress, may feel he has more latitude to alter the tone of foreign policy.

Hence, the very long meeting with Joe Biden, which the US president cast as positive, and Xi’s benign attitude to several other leaders in the past few days.

The change in stance towards Australia may partly be in the slipstream of this wider move.

Bilaterally, however, the defeat of the Morrison government has enabled and facilitated the recalibration of the relationship. If Scott Morrison were still PM, the fridge door would likely have remained shut for some time.

The Albanese government, from its first days, has handled adroitly the run-up to Tuesday’s meeting. It responded appropriately to China’s initial overtures for a rapprochement, sending positive signals while making it clear it would not give ground on substantive issues.

We now find ourselves in a somewhat paradoxical situation. While we look to better times with China, Australia’s defence preparations, which include a strategic review to report in March, are all about improving our preparedness – including our interoperability with the Americans – against a possible threat from that country.

Defence Minister Richard Marles, who was also acting prime minister this week, sought to square this circle when he addressed the Sydney Institute on Monday.

“A commitment to stabilising our relationship with China does not mean we won’t also maintain a clear-eyed focus on our security,” Marles said.

“The idea that Australia has to choose between diplomacy and defence – or as some critics would have it, between co-operation and confrontation – is a furphy, and a dangerous one at that. 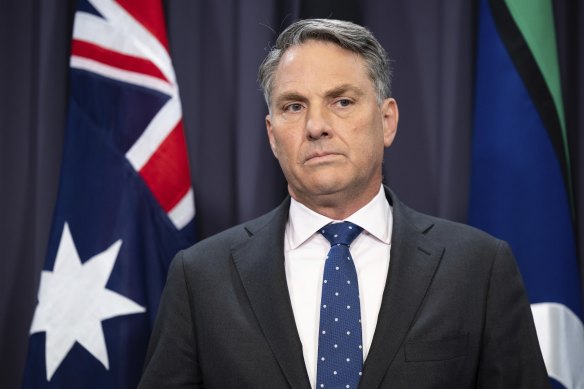 On the threat side, Marles was blunt. “We must adapt to the world as it is, not as we would wish it to be. A world where post-Cold War optimism has been replaced by the reality of renewed major-power competition. A competition in which Australia is more relevant now than at any time in our history because its centre of gravity is in our region, the Indo-Pacific, where it is driving the biggest military build-up we have seen anywhere in the world over the last 70 years.

“The risk that this competition becomes confrontation, with all the destructive power of modern weapons, is a threat that we recognise and want to avoid,” Marles said.

“That’s why sober, responsible and clear-eyed statecraft has never been more important.”

The Xi meeting was never expected to yield immediate “announceables”, whether the lifting of restrictions on $20 billion in Australian trade or the release of detained Australians, journalist Cheng Lei and writer Yang Hengjun.

There is some speculation an easing of the trade sanctions might begin around the anniversary of diplomatic recognition. Ambassador Xiao has been showing a keen interest in that milestone, talking to people with first-hand knowledge of Whitlam’s travel to Peking (now Beijing).

A cursory glance at history indicates it is important to put the Xi meeting into a longer-term, cautionary context. It was only in 2014-15, under the Abbott government, that Xi addressed the Australian parliament, and the two countries signed and celebrated their free-trade agreement.

Then things went quickly downhill. During Malcolm Turnbull’s prime ministership, China was riled by Australia legislating against its actual and potential interference. In particular it was infuriated at the rejection of Huawei’s participation in the 5G network.

The climate (on both sides) grew colder under Morrison. China progressively ramped up trade restrictions. It was angered by the Australian government’s call for an inquiry into the origins of COVID, which began in Wuhan. Australian ministers could not get calls returned. 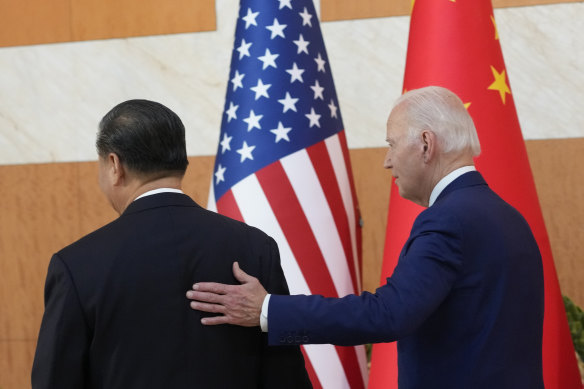 US President Joe Biden, right, prepares to meet with Chinese President Xi Jinping on the sidelines of the G20 summit this week.Credit:Alex Brandon

It is worth recalling that the ups and downs of recent years have come within Xi’s presidency. It is not as though there was regime change; rather, it has been changes of stance during one man’s leadership, prompted often by Australia’s push-back against China’s behaviour (or the perceived risk of it).

Relieved as we are to be out of the freezer, we have to remember circumstances can always see us returned there.

That’s where Canada is at present, following its reaction to China’s meddling and pressure. At the G20, Xi did not accord PM Justin Trudeau a bilateral meeting. After Trudeau grabbed him for a “pull-aside” (as such encounters are termed) and the Canadian media were briefed on the discussion, Xi publicly upbraided Trudeau.

As the bilateral relationship unfolds in coming days, Dutton should have the opposition maintain, as far as possible, a solid front with the government.

After his session with the ambassador, he tweeted: “We had a constructive meeting where we discussed security, trade and human rights issues. I will continue to engage in an open and honest dialogue in matters relating to the safety, security and prosperity of our region.”

It’s important that government and opposition present a united face to China.

Australia should take full advantage of the new rays of sunshine in the relationship. But Australians should, and probably do, understand that this is a relationship where clouds can quickly gather, brought about by both the actions of China and the reactions that an Australian government may consider, rightly or wrongly, to be necessary in the national interest.

Dennis Richardson, who has formerly headed the defence department and the foreign affairs department, captured the moment succinctly.

“We’ve reached the end of the first phase of the Albanese government’s efforts to improve Australia’s relationship with China,” he said. “The substantive challenge of turning that into real outcomes in trade now begins. But whatever happens on that front, Australia and China’s strategic perspectives remain at odds.”

Cut through the noise of federal politics with news, views and expert analysis from Jacqueline Maley. Subscribers can sign up to our weekly Inside Politics newsletter here.