After calling out his nemesis Kanye West in a recent verse, Drake may be ready to duel on release day. Just recently, on August 21, the Canadian star guest-starred on Trippie Redd’s “Betrayal,” on which he included a few shots aimed at Kanye. “All these fools I’m beefin’ that I barely know/ Forty-five, forty-four (burned out), let it go,” Drake rapped (via Genius). “‘Ye ain’t changin’ s**t for me, it’s set in stone.”

The shade didn’t go unnoticed, as West took to Instagram to respond later that day. In the now-deleted post, the Chicago native shared a screenshot of a group chat featuring eight people (with one contact shown as “D,” leading many to believe Drake was included in the mass text, too). “I live for this,” West’s group text read, accompanied by a picture of Joaquin Phoenix as The Joker. “I’ve been f**ked with by nerd a** jock n****s like you my whole life. You will never recover. I promise you.” The next day, the rapper went as far as leaking Drake’s Toronto home address, in another deleted IG post (via Pop Crave).

“Okay wtf why would you leak someone’s address,” one fan tweeted. “Kanye releasing Drake’s address is arguably worse than Push revealing he has a child,” another commented. Despite West’s questionable move, Drake refused to engage … until now. Taking over ESPN’s “SportsCenter” on August 27, he seemingly responded by revealing the official release date of his upcoming album, “Certified Lover Boy.” Scroll on for the details. 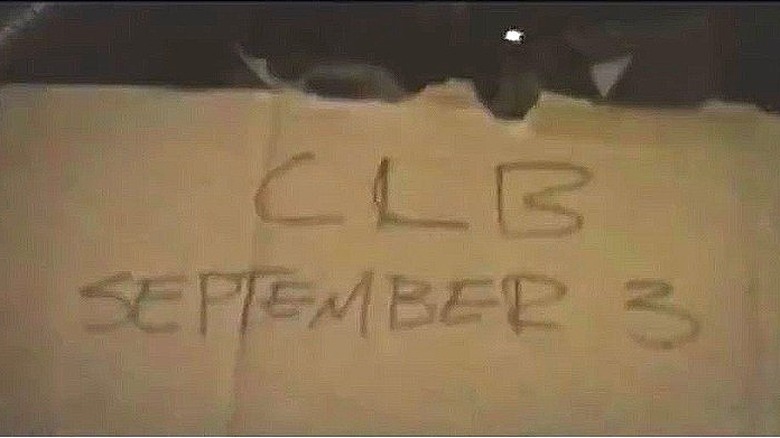 After calling out Kanye West on Trippie Redd’s “Betrayal,” Drake has now revealed the new release date for his new album, “Certified Lover Boy.” And to do so, he briefly took over ESPN’s “SportsCenter.” In the clip, an unidentified man can be seen holding a sign saying, “CLB SEPTEMBER 3,” meaning that Drake’s project will alongside West’s “DONDA,” which is scheduled to drop that same day.

As always, Twitter didn’t take long to react to Drake’s surprise announcement. “Drake saw Kanye & Kendrick Lamar getting ready and decided he’s stepping out first. Certified Lover Boy next week,” one excited fan wrote. Some think that Drake’s new “CLB” release date is the perfect way to retaliate on West. “When Certified Lover Boy washes Donda in sales and billboard charts I don’t want to see you drake haters running back to the king of hits who’s been doing this for 10 years straight,” a Drake fan tweeted.

Meanwhile, others think Drake’s TV takeover was actually inspired by West’s “Joker” text. “After Kanye west sends a picture of the Joker to Drake through text message, look what Drake just did this morning!!” one person pointed out. “Remember in the movie Batman when the Joker Hacked the news channel? Drake Hacks into ESPN Broadcast. This is chess now.” Though it’s hard to predict who will “win” on September 3, what’s certain is that it will be an exciting day for music.