I just heard Friends is back. Are we caught in a time warp? How is that even possible? It's kind of true. The cast of Friends, which ran on TV between 1994 and 2004, are reuniting for a one-off special titled The One Where They Got Back Together.

That's nuts. Wait, what's Friends again? Is that the one with the Soup Nazi? No, Friends is the one with six friends who hang out at the Central Perk coffee shop in New York. Rachel, Monica, Phoebe, Joey, Chandler and Ross. Oh, and Gunther. And Marcel the monkey, and Janice. And the catchy theme tune, I'll Be There For You, by The Rembrandts. 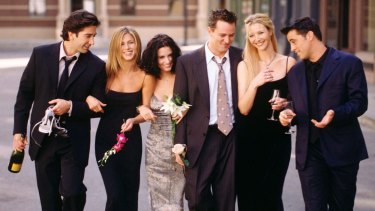 Right? Will it pick up the story where it left off? Or 16 years later? This is where it gets complicated. It's not an actual episode of Friends. That is, it's not scripted. And they're not returning in character. It's an actual reunion, where everyone sits around in armchairs and talks about the good old days.

Oh. Well, that's still exciting. I think. When can I see it? It will stream in the US on the new WarnerMedia streaming platform HBO Max, which launches in May. So, sometime after that. As HBO Max is not actually in Australia yet, the most likely scenario is that the special would be offered for sale by the TV content sales arm of the studio, like most TV shows were in the pre-streaming era.

So, who will air it here? It's not clear yet. Nine aired the original series, but in those days they had an output deal with Warner Bros, who made it.

What about Foxtel? Don't they get HBO shows? Yes, they do, but this is not technically an "HBO" show. It's a Warner Bros show made for HBO Max in the US. At this point, it looks like it's still on the open market.

Who is actually coming to the reunion? Is it gonna be one of those things like The Brady Bunch Variety Hour with Fake Jan? No, everyone is coming. Jennifer Aniston, Courteney Cox, Lisa Kudrow, Matt LeBlanc, Matthew Perry and David Schwimmer will all attend.

What about Gunther? And Marcel the monkey? And Janice? WarnerMedia has not yet said whether the show's supporting cast might return. Or even some of its more prominent guest stars, like Kathleen Turner, who played Chandler's drag queen father Charles Bing, aka Helena Handbasket, or Brad Pitt, who played Will Colbert, Ross' school friend, who harboured a grudge against Monica.

Will it be filmed on the show's original set? Yes.

And that is where, exactly? Stage 24 on the Warner Bros lot in Los Angeles. That's where Friends was filmed from its second season onwards. It's also where, if you're a showbiz history buff, Calamity Jane (1953) and A Star Is Born (1954) were filmed, and where the TV shows Wonder Woman and Full House were also filmed.

What else do we know about it? It will be edited into a one-hour program for its release. And the spend on talent is reportedly in the $US20 million ($30.5 million) range, which means each of the six actors is being paid around $US3.5 million for the special.

I loved Janice. Anyway. That's a massive amount of money. It's a drop in the pond when you consider that HBO Max paid $US425 million to secure the rights to the 236 episodes of the series itself.

Oh. My. God. No, really, enough with the Janice.

So, that's an even bigger amount of money. Yep. That's the streaming economy in play. As each major US studio launches its streaming platform, the cost to buy the rights of hugely popular sitcoms like Friends, The Office and Seinfeld has sky-rocketed.

It feels like these days they do a reboot the year after a show gets cancelled. How come it's taken so long for Friends to come back? Well, there's a whole bunch of reasons but the simplest one is this: they were on a break.